When our children were small, my husband began mowing paths through our field, grassy lanes that allowed little legs to maneuver more easily through the landscape of home. We still mow the paths – one up around the front field, another down to Big Rock, and “Auntie EB’s Path” toward my sister-in-law’s house. The one that gets the most use, though, is the Apple Path. 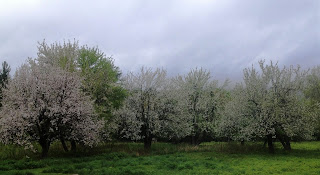 This one wends between what were, perhaps, once neat rows of apple trees. Long untended, the trees now are in various stages of wildness. Some have fallen over in recent years, their old trunks twisted and gnarled. Others, left unpruned for too long, have grown unruly, like wild-haired beasts, with shoots flying upward from branches at all angles and varying heights.

Some years ago, as winter merged to spring, I made an attempt to prune a few of the trees, cutting off new shoots and sawing away tired old branches. I vowed to get to each tree – nearly three dozen in total through the front field and the back one – over the course of a year or two. But it was hard work after so many years of neglect; I was indecisive in which limbs to prune and which to keep. And so the orchard remains mostly wild.

While some of the trees are gangly and awkward, others are tall and full – vastly larger than the neatly, purposefully trimmed trees of commercial orchards. Those trees are tended to optimize fruit production. Ours are simply a familiar part of the topography now, changing just as the other wild trees – the maples and pines and birches – growing, breaking, altering their shape through the course of weather and nature.

The woman we bought the house from told us these were Prohibition trees, planted to grow fruit for making hard cider. The house was built in 1929 – near the tail end of Prohibition – and I wonder if the trees were here before the house, tended by some thirsty farmer down the road.

Whenever it was planted, and despite our neglect of the trees, we have watched many seasons shift through the old orchard.

In mid-spring, the trees transition from bare, twisted limbs to a glorious display of pastel blooms. At first, the small, tightly-whorled buds of palest pink appear, then a few blossoms unfold here and there, until suddenly the field explodes into a sweet-smelling froth of white and pink flowers. The bees buzz through the apple trees then, happily seeking the nectar there.

By the time the flowers have gone, the landscape around the apple trees has greened toward summer, and our attention shifts to other things. But come fall, the apple trees stand out again – no so much for their foliage, which, frankly, is rather blah, but for the abundance they hold.

Some of the trees have red fruit, others yellow. The apples don’t grow large, and they tend to be spotted, but they are ample in number. Some years – mostly when the kids were little and unencumbered by homework and soccer practice – we have gathered enough to make cider (not the hard kind) and apple sauce.

Mostly, though, our apple trees feed the wildlife. We have seen – either in live time or through images captured by the game camera – an array of animals traveling the Apple Path: turkeys, bears, deer, foxes, porcupines, coyotes, squirrels, crows. This year, there is a distinct, well-trodden trail pressed into the grass along the length of the Apple Path, leading from the densest cluster of apple trees down to the forest beyond our field.

The game cam is on the fritz, so I can’t know for sure who has made the trail. But I suspect the regular travelers include the mother bear and three cubs we saw often through the summer, the cubs growing from tiny, black fuzz balls to what I imagine is teenage-hood for bears – which likely means those cubs are constantly hungry now.

Several years ago, when my own cubs were still tiny, we had a mother bear with four cubs in the neighborhood. When we inadvertently startled them one evening, she sent all four up a lanky apple tree just behind the vegetable garden. While they peered out from the branches, she remained calmly on the ground below, noshing on windfall apples.

Now, in the thick of autumn, many of this year's apples have fallen to the ground. Past experience tells me the deer will continue to eat the apples as far into the winter as they can, ambling along the Apple Path and scratching through the snow to reach the fruit that remains long after it ripened and fell.

When the snow becomes deep, the deer keep to their sheltered, hidden places. The bears, too, will have hunkered down by then, hopefully well fed on fall’s bounty. Winter’s starkness will again reveal the bones of the trees and lead me once more to thoughts of pruning – someday.