Among some of my friends, I have a reputation for being a bit of a nature nerd. In winter, I scan ski trails for animal tracks from the chairlift. I can’t travel a back road without peering at tree hollows and fields to see what animals might be hiding or foraging there. On walks through the woods, I’m easily distracted by wildflowers, weird lichen, and scat. 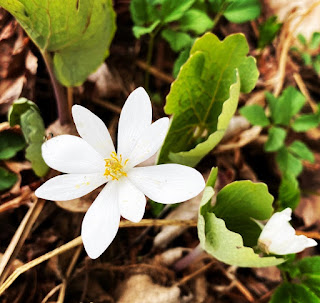 So it was a joy last week to wander a swath of forest with my colleagues from the nonprofit organization where I work, whose mission is, in part, to foster an understanding of and appreciation for the natural wonders of forests. It was a happy gathering of nature nerds – made even more so, perhaps, by the cool spring sunshine and because this was the first time we’d all been together in over a year.

As children, we have with an innate sense of curiosity about the world around us. Why is the sky blue? Where did that word come from? How do birds fly? What do worms eat? Why do stars sparkle? I remember being inundated by Whats and Whys and Hows when my kids were little. And then, at some point, that curiosity – at least for many of us – subsides as we become more occupied with school and jobs and sports and social activities.

For me, this curiosity waned for a while, but returned well into adulthood. I think it was sparked when my children started asking so many questions, inspiring me to seek at least some of the answers. My now teenaged and almost-teenaged children still ask questions, if not so frequently. But when it comes to the natural world, I’m the one who drives them nuts, asking questions and stopping to take photos of both familiar and unknown discoveries. No matter how many birds I learn to identify, how many wildflowers I can name, or how many intriguing animal habits I read about or observe, there is always so much more to learn.

Years ago, I attended a nature writing conference in northern Vermont, where I joined the early morning birding walks. I knew next to nothing about birds, couldn’t identify much more than a chickadee and a robin. One morning I was walking along a dirt road with the program director, Dave, when the guide pointed out some species I no longer recall. I said something like, “That little thing?” Dave chuckled and suggested I might try to seem a bit more impressed if I found myself near more serious birders.

Now, when I see a bird in the yard I can’t identify, I zoom in as far as my little camera will allow and snap a photo so I can compare it to my field guides and check the Cornell Lab’s incredible All About Birds website. If I’m still stuck, I send the photo to my Northern Woodlands colleague Dan, who will tell me if I’m guessing correctly or, if not, what important features I’ve missed on the path to bird ID.

Gradually, the number of birds I can identify – by sight or song – has grown, though I’m still no birding expert. (I think I will forever be befuddled by woodpeckers.)

Some of what I’ve learned – about birds and bugs and flowers and mammals and trees – is through personal observation and education. Other things I’ve picked up through researching some story or another that I’m writing. Much of it I’ve gleaned from reading and editing the work of writers who are introducing me – and many other readers – to aspects of the world around us I’d never known, or even thought to wonder about.

During our walk last week, we meandered among oak and ash and hemlock trees, past rock ledges where bobcats and porcupines and turkey vultures and many other creatures roam. We found myriad wildflowers scattered across the forest floor, tucked into crevices or growing tall through the leaf litter. Wood ducks took flight from a vernal pool as we neared, and we heard a yellow-bellied sapsucker rat-a-tat-tatting at a tree – and found lots of places where sapsuckers had tapped rows of perfect, tiny holes into bark.

On this walk, I was not the only one stopping and stooping to inspect scat or snap photographs of familiar flowers – or of unfamiliar ones to look up later. And often, when I had a question, someone else in our little posse knew the answer. It was a pleasant way to spend part of the day – fostering our own understanding of and appreciation for the natural world.

Posted by Meghan McCarthy McPhaul at 6:21 AM No comments:

This week, my oldest offspring selected classes for their first year of high school. Even as I type that sentence, I can hardly wrap my mind around it: two of my children will be high schoolers in a few short months, and my baby a middle schooler. No matter that two of them are now taller than I am, and the third is gaining on me quickly, I can still picture all three as newborns, toddlers, little kids.

I don’t think I would say I miss the days of tending to infants or preschoolers or any other bygone stage
of my children’s younger years. I have loved each of my children – and gotten to know them – through the progression of their childhoods. Despite the trials of the “terrible twos” and the “sassy sixes” and the excessive eye rolling that happens in my house these days, I’ve enjoyed most parts of every phase of their growing up.

When I look at photos from years past, or when we’re sitting around swapping “Remember When” stories, it is easy to feel nostalgic, though I don’t have any desire to go back in time. Contemplating the tiny, chubby-cheeked, big-eyed kids in those photos, however, makes me realize – again and again – how quickly these years pass by.

It really wasn’t all that long ago that I had three kids under the age of 3. Then three preschoolers, then three in elementary school. Back when they were all in diapers – and pretty much dependent on me for everything – someone told me, “The days are long, but the years are short.” Whoever first uttered that adage obviously had raised children.

These days, I sometimes feel a sense of woeful panic at how few years of childhood my children have left. Four more years. That’s what remains until my older two move on to whatever comes after high school. A mere four years ago, they were in the midst of their elementary school years, and four years from now, they’ll be legal adults. It doesn’t seem possible – to me or to them.

One of my children has said to me several times lately, “It seems like time is passing by so quickly.” And it’s no wonder. These middle school years are the bridge between being a little kid and becoming an almost-grownup. My teenagers are newly and acutely aware that childhood has an expiration date, even if the exact deadline is obscure.

I have a clear memory of an 11-year-old me sitting with a friend on a summer afternoon, days before we entered middle school, and saying to her that it felt like time was flying by, that soon we’d be in high school, then college, then who-knows-where. In that moment, that looming change seemed overwhelming. I could see adulthood on the horizon, even as it was still years away.

She laughed, and a few minutes later, we were off again, riding our bikes through the hazy summer day, as carefree as the children we still were. That’s the mercurial nature of this time in my children’s lives – one moment thoughtfully considering some serious responsibility, the next playing a silly made-up game with friends or siblings.

I can also clearly remember the anxiety of dropping my kids off at preschool for the first time, then at kindergarten in the “big school” a couple of years later. Even back then, I thought, “How are they so big already?!?” Sometimes, still, it feels as if just last week they were so small I could snuggle all three together in my lap. I can’t imagine how I’ll feel when they step out into the great big world all on their own.

And so I keep reminding myself – in the moments when I’m facing eye-rolling, contrary, children in the process of growing up – that these days, too, may sometimes seem long, but the years are as short as ever. I bask in the happy times we spend together and in our shared adventures. I try to offer advice and comfort in those moments when these children of mine feel stressed or sad or worried. I strive – not always successfully – to keep my temper when they push buttons and boundaries. And when one of them needs a hug, I lean in and hold on, for as long as they want, until they let go.

Posted by Meghan McCarthy McPhaul at 5:00 PM No comments: