The snow that turned the yard – briefly – bright white earlier this week was an anticipatory antidote to a day that started dreary, dark, and drizzly. This time of year, I often have to force myself to take a deep breath and remember winter is – well, if not short, not forever.

Don’t get me wrong: I love winter. I love snow. I love being outside on skis or snowshoes or just on my porch, gazing up at the winter-bright stars.

I just don’t like the darkness. Or this barren stretch of between – between leaf fall and snow fall, between soccer season and ski season, between vividly colorful fall and glistening winter wonderland.

The dimness that seeps into early mornings near the end of summer serves as a rude reminder of the long darkness to come. I am distracted at first, however, by the start of school and all the hustle that happens as I shift my schedule from summer activities to school year busyness. I can ignore the gradual growing of darkness – until the morning when I have to use the light on my phone to safely navigate down the hallway, past doorways behind which sleeping children lie, and into the dark kitchen where my coffee maker awaits.

I can even ignore the light disappearing from the other end of the day, which becomes most notable around the end of soccer season. In mid-September, there is still considerable daylight after practice ends. By the middle of October, we are driving home at dusk. And now, without the distraction of planning practices and rehashing games just played, I am suddenly aware of how short the days are becoming.

We haven’t even made it to the end of Daylight Savings Time yet, and already dusk comes so early that I feel as if we should be eating dinner at 5 and going to bed at 7.

We have eight more weeks of shrinking light until the Winter Solstice. It’s no wonder ancient people planned elaborate pagan rituals around the day when, finally, light begins again to lengthen. And no wonder that we more modern humans plan a slew of celebratory events between now and the end of December – Halloween and Thanksgiving and the winter holidays. They all serve as good distractions in these dark days – something to look forward to and busy ourselves preparing for.

Tuesday this week, the night before it snowed, the sun set in a golden glow of that only comes with Fall. The day’s last light reflected off retreating rain clouds and glanced across a few yellow leaves still clinging to tree branches to set the landscape to shimmering amber.

It was a reminder that as the length of daylight diminishes, it also becomes more precious. And the next morning’s snow reminded me that although the winter days ahead will surely be dark, if we are lucky, they will also be white.

A game, a practice, and a tournament. That’s what’s left of this soccer season – and of my tenure coaching the local sixth grade team. This group is special to me, and not just because two of them are my own offspring. I’ve coached most of these kids since they were in kindergarten. For better or worse, they’ve been stuck with me as their soccer coach since they were 5 years old, and so I feel a little bit of ownership over the soccer portion of their lives. 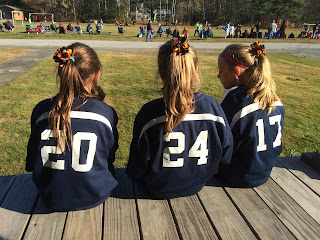 Seven years. That’s about twice what any high school or college coach gets with a group of players. But the distance in skill and understanding from kindergarten to almost-middle school, from their very first practice to their last elementary school game, is immeasurable.

When these kids started, most of them couldn’t tie their own cleats. They were tiny, with gap-toothed grins and knobby knees and not a whole lot of coordination. Over the years they’ve become more than better soccer players; they’ve become a team.

I’ve watched as this crew has progressed from toe balls and clumsy dribbling to quick moves and long crosses and power shots. I’ve seen them transition from little kids who sometimes didn’t know which way on the field their team was going to poised players who make clever runs off the ball, from bunch ball and chaos to smart defense and tactical offense.
Coaching these kids has been part parental responsibility, but mostly a labor of soccer love. I love the game, love sharing it with others, have loved watching these kids learn and grow on the field.

I coached them through their first jamboree as kindergartners to their first Halloween Cup as third-graders. I held my breath with them when, as fourth-graders, they triumphed through three penalty kick decisions and incessant cold rain to reach the finals of the last tournament of the season, then – bone tired and thoroughly drenched – lost that game. I stood with three of these girls – and their year-older teammates – at last year’s Halloween Cup final, where they went down to a penalty kick loss after not giving up a goal all day.

A coach can teach kids to pass and shoot and defend, but there was little I could do on either of those days except tell them how proud I was of their grit, and then let them feel the loss. It’s all a part of the game, a part of the learning process, a part of growing up.

Gradually, they’ve grown together – both on and off the field. They’re a good mix of sassy and tough, goofy and competitive, and they make a great team. I feel lucky to have been their coach – one of a small crew of coaches – as they’ve learned their way around a soccer field.

One more game, one more practice, one more tournament. Then I pass them along to the next season, the next coach. And, for this group at least, I graduate to soccer spectator. You can bet I’ll be there cheering these kids on when they take the field next year.