The population of Franconia swelled to about three times its normal number last Saturday as several hundred young soccer players – and their entourages of family and fans – from towns throughout northern New Hampshire and Vermont descended on the Dow fields for the Halloween Cup. 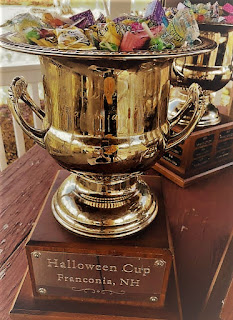 This annual tournament has become a traditional end to the soccer season for kids in grades 3 through 6. It’s one last chance to show off skills, play with friends, and hang around eating tournament food and goofing off on the playground between games. For the Lafayette communities of Franconia, Easton, and Sugar Hill, it’s also a big fundraiser for the local recreation department.

Although the focus of the day is soccer, the underlying theme is community. Pulling off an event this big truly takes a village – or, in this case, three villages. Each year, at the end of that third Saturday in October, I find myself feeling proud of and thankful for our community, which is small in number but big in heart.

It was still dark when I arrived at the soccer field with two of my kids in tow Saturday morning – and dark again when we left, more than 12 hours later. The lights of the new pavilion – built in part with past Halloween Cup funds – shone through the dimness of pre-dawn, revealing a crew of friends and neighbors already at work.

Throughout the day, I saw an array of people filling shifting roles: parent-food server-coach, teacher-fan-referee, sibling-grill master-former player. Among the volunteers were a multitude of soccer moms and dads, selectmen, retired teachers, the local elementary school principal, and coaches and teachers from the high school. At least one first-year college student came home for the weekend to help out, and there were others on the sidelines.

My son, after his own four years of Halloween Cup competition, became a timekeeper, score runner, and trash collector for this year’s event. He also made his first foray into refereeing, sharing officiating duties for a handful of 3rd and 4th grade games with the principal of his elementary school.

He marveled at how small the Halloween Cup players seemed, even though he was playing on that same 3rd and 4th grade field only three years ago. And he seemed as happy – or happier, even – as a Halloween Cup worker as he’d been as a player. His highlights of the day were filling the Halloween Cup trophies with candy before most people had arrived at the fields, and blowing the shrill airhorn to mark the beginning and end of several games.

For me, the best parts of the day were varied, broken down by time and responsibility.

I spent the morning with the 5th and 6th grade girls team I’d helped coach through the season and was proud to see them play their best soccer of the year. These girls built their own sort of community through the season – coming together from two different rec programs (Bethlehem and Lafayette) to form one team. They are an awesome bunch, and they earned a spot in the Halloween Cup finals Saturday, where they narrowly missed winning the candy-filled trophy.

That afternoon, my focus shifted to the 3rd and 4th grade fields, where I joined the ranks of volunteer referees to call handballs and offsides and remind these younger players to keep their feet down during throw-ins. As my focus has turned gradually toward middle school and high school soccer, it was fun to see these smaller, newer-to-the-game kids – including a few I coached last year – play their hearts out on the field.

Later, as the sun sank below the trees, we watched the Lafayette team play in the boys’ finals, on a field lit by temporary lights and emergency vehicles. Around us was a crowd of others who’d been there for hours, watching, coaching, working, cheering.

Among the spectators was a group of high school boys who had reffed games earlier in the day. Not so long ago, these boys were the ones on the Halloween Cup field. On this night, they celebrated the home team’s winning goal as if the younger players had just won a high school championship.

Somewhere along the way – whether in 3rd grade or high school or beyond – I hope these kids recognize the sense of community that encompasses these events and this place. Because after the trophy is presented and the victory candy shared, after the lights are turned off and the fields are cleared, that community remains. We help each other, cheer each other on, pick each other up after the tough games, and celebrate the victories. Together. Because there are many times, far beyond the soccer field, when it really does take a village – or three.