When my youngest was a baby and the older kids toddlers, I used to load them all into the car – which back then entailed buckling three little ones into cumbersome car seats – and go for meandering late afternoon drives. We’d cruise the neighborhood by minivan, looking for farm equipment and horses along the way, so these tours became known as Pony & Tractor Rides. 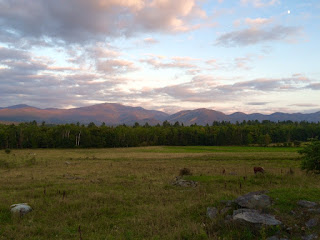 The timing of these outings was entirely based on the littlest one’s need for a short snooze between naptime and bedtime. Things were just easier – for everyone – if she slept for 20 minutes, but the only way she’d sleep at that time of day was in a moving car.

Sometimes she’d be asleep before we left the driveway, and the ride could be a short one. Sometimes it took a couple of miles, so the tour was extended. Sometimes there was no sleeping at all. But there was quiet. At least that’s the way I remember it. And as any parent of small children knows, there is immeasurable value in a few minutes of quiet.

The path we followed changed a bit based on the timing and my whim, but we had favorite routes. Often, we drove out the Easton Valley, where we’d pass cows and tractors and the occasional hay wagon at Pinestead Farm and possibly an old grader or some other interesting piece of equipment near the Franconia/Easton town line. A right turn a bit further along would bring us up Sugar Hill Road, where we knew we’d likely spot a pair of old, retired mares and a couple of older, not yet retired John Deere tractors.

From there, we could pass by the Stewart Farm and look for more horses near the stables down the road. Or we could loop around and drive past the old Gibbs Farm, or turn onto Toad Hill Road and decide at the far end whether to go uphill or down.

Usually, we’d end up on Lover’s Lane, a road every bit as pretty as it should be with such a name. Back then, some neighbors there kept a small herd of goats, and we knew if we timed it just right, we’d see the goats being led back to the big red barn that sat down in the hollow at the base of an old meadow. Often, there was an antique tractor out in the field, too.

The barns, stone walls, and cleared fields are remnants of a more agrarian time. It seems impossible now that so much of a landscape that is forested was nearly treeless a century ago. As we drove, I was thankful for the quiet, but also for both the trees and the barns, the places for wild animals and tame ones to dwell – and for the many things to see that that would entertain the kids during these short outings that allowed us all to recharge.

In the funny way things have of cycling around, we’ve taken to embarking on the occasional late-day drive again. My husband, who started this recent trend, calls these jaunts Neighborhood Appreciation Drives.

The kids no longer need pre-dinner naps, of course, or help buckling in, nor do they have the same fascination they once did with John Deere Tractors – although they all know how to drive one now. But they are always eager to load up for a Neighborhood Appreciation Drive.

Sometimes we embark on a new route, visit some unfamiliar scenic outlook. Sometimes we stop so the dog can splash around in the river. Always we pull over along the side of a backroad to visit a trio of horses who come to the fence and let us pat their soft noses and dusty necks in exchange for handfuls of fresh grass and clover leaves.

These drives are less frequent than the Pony & Tractor Rides of years ago. They happen spontaneously, during pauses in busy schedules, usually during that magical time of day bridging sunset and moonrise, when colors shift in the sky and across the mountains.

When we turn onto the familiar road to home, just as I did when the children were little and we wandered back from our Pony & Tractor Rides, I often feel a same sense of calm. Perhaps this comes from the change of pace, the soft colors of the sky at dusk, the quiet time spent with my family. There is much here to appreciate.

We took a spontaneous, whole-family trip to the Seacoast last weekend, piling all three McPhaul kids and both adults into the minivan – along with the dog. Only the cat was left behind, and since he doesn’t even like the short drive to the vet once a year, he seemed OK with staying home. 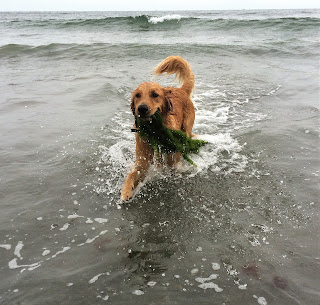 I am a planner. I like to know what the itinerary is before I head out on a journey. This natural tendency became more acute once I had kids and needed to plan for snacks and meals and bathroom breaks and all the other minutiae that come with traveling – even if just down the road – with small children. Now that the kids are older and relatively self-sufficient, I’m able to “wing it” a little more. But I still carry snacks and a first aid kit just about wherever we go.

My husband, at least when it comes to family time, is more likely to improvise. He’ll tell the kids to grab what they need for any potential adventure – sneakers and swim suits, towels and lunch – and jump in the truck. He’ll take a drive without a pre-determined destination. He’ll change the plan as he goes – or just head out without one. If we’re going away for more than an afternoon, I make a list and check off items as I pack well in advance. He throws a few things in a bag five minutes before we walk out the door.

We know each other’s tendencies – and that sometimes, often, they are in opposition to each other. Usually we make it work.

So, when he mentioned this idea of driving to Portsmouth for the day, with several potential things to do while we were there, I threw caution to the wind and said, “Let’s do it.” And then, of course, I packed enough snacks to last us at least three days.

Along with visiting a friend who lives on the Seacoast and watching the hometown high school soccer teams, who were playing all the way down there Saturday afternoon, we also wanted to take our dog, Maggie, to the beach.

Maggie turns two this week. We brought her home when she was a tiny bundle of golden fluff. She’d never been outside until the October day, just before Halloween, when we collected her from the Vermont farm where she was born. We placed her promptly on the grass. One sniff and she was smitten. She’s loved being outside ever since.

One of Maggie’s favorite outside places is in the water. It doesn’t matter if it’s a lake, a river, or a muddy drainage ditch along the road. If her fur is wet, she is happy (unless a bath is involved). But she’d never explored the salt water – a fact of living in the mountains rather than by the sea.

Always game for an adventure – whether a morning run, a family hike, or just a quick ride in the car – Mags eagerly loaded up Saturday morning. She stuck her head out the window as we drove down the road, wind in her face, ears flapping, eyes half-shut in ecstasy. She whined in anticipation as we drove through the Notch, hoping to get out and jump into a river or run along a trail.

She leaped from the car when we finally arrived at the ocean, picked her way down the rocks to the beach and bounded toward the water. Then stopped and retreated as gentle waves broke and moved up the sand. Rivers don’t do this, nor lakes.

Several times, Maggie trotted forward as the sea water retreated, then backpedaled clumsily as it rolled again onto the gray sand. Finally, she followed the kids as they waded in up to their knees. She chased the rocks we threw into the waves for her. Lapped at the water as she always does and shook her head in confusion at the briny taste.

She got used to the waves, then realized the ocean is filled with treasures. She started coming back to the beach with long, bushy strings of bright green seaweed clenched in her teeth, proud of her discovery in this odd-tasting, always moving water.

We humans stood and watched her antics, thoroughly entertained as we so often are by this goofy dog who chases butterfly shadows, begs for bits of broccoli, and is entirely obsessed with squirrels.

Then we carried on with our unplanned road trip, meandering along the shore before turning inland to the next thing and, eventually, north toward home. It was fun to explore, even briefly, a different part of the state. Back home, contentedly tired, we all agreed the best part of the day was watching Maggie meet the sea.