She pedals confidently now, blond ponytail flapping from beneath her bike helmet, little legs pumping furiously to keep up with the bigger kids as she makes her way up the driveway, down the road, through the woods. 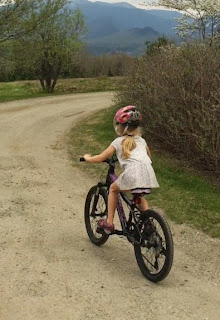 It wasn’t always this way, of course. As my youngest daughter learned to ride her big girl bike last year, she was a little shaky and a bit timid. While I ran up and down our long driveway alongside her and eventually watched her pedal away on her own, I pondered the obvious parallels between the evolution from trike to training wheels to two-wheeler and the process of parenting children as they grow up and figure out the world around them, gradually expanding their horizons beyond our own view.

We parents are forced to let go, a little at a time. First our children roll, then they crawl, then they walk, then they run. Before we know it they’re ditching the training wheels and popping wheelies, skiing fast down steep trails, reaching new heights in the classroom, on the field, the playground and beyond.

At first, she’d wanted nothing to do with pedaling. She preferred her pink, wooden balance bike – a two-wheeled set-up without pedals – which allowed her to always be touching the ground with a foot or two. Taking both feet off the ground was too unnerving, even for a girl who has spent her earliest years determinedly matching the pace and challenge of her older brother and sister. If they dare to tell her they can do something faster or better, she quietly sets out to prove them wrong.

One morning last spring, with the snow gone from even the shadiest corners of the yard, she decided that she was ready, at last, to pedal. She was unsteady in her first attempts. And so I ran alongside her, bent over and grasping her seat with one hand and her handlebars with the other, as she found her balance and gained confidence.

Soon she needed me only to hold the seat, helping to control her speed, correcting the line if she veered too sharply off course. After several trips up and down the bumpy dirt driveway, she was ready for me to let go and run next to her, close enough to reach out and steady the occasional wobble. Within an hour, she was off and pedaling on her own. When her brother and sister returned from school that afternoon, they were excited to coach their little sister at the childhood skill of pedaling really fast, then slamming on the brakes to make skid marks in the driveway.

We hold onto our children tightly only so long before they demand their freedom, pedaling away solo with nary a backward glance to see if we are still watching, waiting, ready to lend a steady hand in case they stumble. That’s as true of growing up in general as it is of the specifics of learning to ride a bike.

As my daughter has figured out how to balance steering and pedaling, how to make long, wiggly skid marks in the dirt and pace herself on the hills, she has, I hope, learned a few larger lessons as well – even if she may not recognize them just yet.

Sometimes you hit bumps and pot holes you didn’t see coming. Some of these you can cruise right through, regaining your balance quickly; others make you fall down. When the bicycle of life throws you in the dirt, it’s OK to cry a little bit, but eventually you have to get back up, dust yourself off, and keep going. Climbing hills can be exhausting, but the reward of flying downhill on the other side is usually worth the effort. There’s a great big world out there to explore, but you have to be brave enough to move beyond your comfort zone to get there.

Not long after the pedaling breakthrough, we were embarking on family outings through the woods, the kids’ first mountain biking adventures. The littlest biker, the only one without gears to shift, pedaled ferociously to keep up, bouncing jarringly over rocks and roots, but keeping her balance.

This spring, she got a new bike, one with gears and hand brakes. It is purple, and bigger than she was used to, and she is still figuring out how and when to shift. Still finding her balance on the steepest and bumpiest parts of the trail, where she is sometimes momentarily – and frustratingly – paralyzed by nerves. Still determined not to be left behind.

And I am still walking that unending parenting line of trying to help, holding on when she needs me to (and will let me) and encouraging her to figure it out on her own, to overcome her fears and meet a challenge I know she can handle, even if she’s not yet sure she can.

Last year, when she was still learning to pedal, my daughter insisted she needed me to hold her seat as she descended the big hill into our driveway. The steep pitch, combined with a sharp turn at the end, seemed a bit too scary to tackle on her own. I knew she could do it, but I grasped her seat with one hand until she told me to let go, knowing that soon enough she wouldn’t ask me to hold on. That I’ll have to keep letting go, a little at a time, and watch as she makes her own way down the driveway through the woods, into the world.

Original content by Meghan McCarthy McPhaul, posted to her Blog: Writings From a Full Life. This essay also appears as Meghan's Close to Home column in the May 22, 2015 edition of the Littleton Record.

Posted by Meghan McCarthy McPhaul at 5:47 AM No comments: 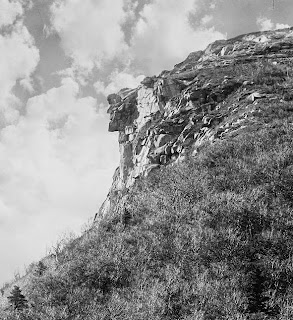