The peas have pushed through the dirt of the garden box in the side yard – the first vegetable sprouts of the season. For a couple of days, I wondered if the planted seeds had drowned in last week’s thunderous deluge of mid-summer-like rain. But Monday morning, there they were: tiny and green and full of promise. 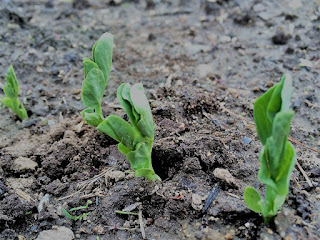 Last week’s heat also inspired leaves, which had been tucked tight against May’s lingering wet and chill, to unfurl into the sunshine that followed the rain. Suddenly, lilac bushes and maple trees and ferns and innumerable other growing things were full and lush.

In a matter of two days, the blossoms of our unruly apple trees popped into an array of pink and white. On cue, the lilacs have followed, infusing subtly-varied hues of purple into the landscape and permeating the air with their sweet, heady scent. The perennials in the front garden seem an inch or two higher every day, as do the lupine stalks in the fields.

I love this phase of spring, when winter’s chill is faded to memory, the light is long and brightening, and the warmth and color hold the happy promise of impending summer.

It is also a time when I feel, finally, that I am progressing in my gardening endeavors. The soil – at least some of it – has been turned. Weeds – a few, anyway – have been pulled. The vegetable garden – slowly, yes, but surely – is starting to take shape as I decide which favorites will be planted where this year.

I am a distracted gardener, so I often start with one task and get pulled toward another before I’m finished with the first. No matter, there is always plenty to do in the garden.

I tend to start with the perennial bed, where the weeds are consistently plentiful. It dries out before the vegetable garden, and it seems a good place to start as the days begin to warm. Often I start with the intention of spending a few minutes there and stay much longer, both inspired by the progress being made and distressed at how much more there is to do. Sometimes the kids join in the weed eradication efforts, gleefully seeking the long roots of dandelions and other persistent invaders against whom I have no grudge other than where they’ve decided to grow.

But before I get through weeding around the astilbe and lady’s mantle, before I have separated the moonbeam coreopsis from where it has overreached its boundaries and tangled with the Stella D’oro lilies, before I have tried to contain all the patches of black-eyed Susans and split (with an ax, because a shovel simply won’t do it) the spreading masses of flag iris – the vegetable plot has dried out, and I leave the high-maintenance flowers for the useful seeds of carrots and cucumbers, leafy greens and bush beans, potato eyes and squash mounds.

Bit by bit, I’ve been preparing the big garden out back, repairing the fence to keep the overgrown puppy out of the compost (she loves broccoli stumps, no matter how far decayed they are), pulling out the long-rooted grass that creeps in around the edges, picking rocks from the soil, tilling it all by hand – one row at a time.

No matter how many seeds I plant, it always seems like magic to me – that a tiny seed can sprout and push through dirt to grow, flower, and become food – or simply a thing of beauty. No matter how many times I watch spring emerge from winter and evolve toward summer, that process, too, holds wonder.

Everywhere now – in the vegetable gardens and flower beds, in the fields and along the roadsides, on treetops and up mountain trails – new sprouts emerge each day, small promises unfurled to spring sunshine, ready to grow. 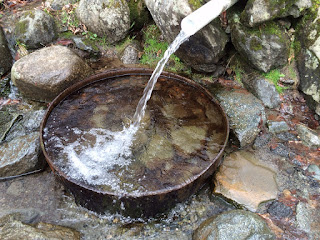