The season of cold and white made an early visit with snowfall at the end of October, enough of the white stuff to inspire skiers to dig out the boards and hike to ski what we like to call the fast grass – that skim layer of white barely covering the not-quite-frozen vegetation below.

October snow is not all that unusual around here. North Country kids know they’ll likely have to wear snow boots to trick-or-treat, and plan their Halloween costumes to allow for plenty of layers. It’s also not unusual for that October snow to melt quickly, which this year’s did.

But November was another story. Multiple dumps of heavy, sticky, lovely snow inspired some to nick-name this month of Thanksgiving “Snowvember.” Before it was time to feast with family, my kids had constructed multiple snow figures in the front yard, honed their snowball-throwing skills, and taken countless laps on the sledding hill.

The scene was complete winter wonderland, with snow-draped evergreens and glistening snow-covered fields. By the time Thanksgiving hit, it felt – and looked – like January. The skiing was fabulous, the plow had been put to work multiple times, and the cross-country tracks were set through the woods.

December, too, started with promise, although little new snow. Skiing on the mountain remained fabulous, and mainly cold temps meant snowmakers kept adding to the base. The track through the woods got a bit crusty, but it was still skiable. The heavy stuff finally melted off the trees, but the mountains remained winter white. Occasional flurries kept the landscape sparkly.

All was, if not calm, at least bright. Until last Friday. Just in time for the Winter Solstice, the rain came.

It didn’t just rain; it poured. For a while that morning, it poured through sunshine, and there was a rainbow arched across the sky. I love rainbows. But not in December. Small rivers of water flowed down the thick ice on the driveway. The kids’ snowy creations, which had lasted for weeks, dissolved into sad piles, then disappeared entirely. Green grass emerged in the yard, and the stalks of put-to-bed perennials poked out from the front garden.

“Great. We’re going to have a brown Christmas,” one of my children proclaimed glumly as they were sprung from school for winter break.

There is nothing so cantankerous as a snow-loving kid on a rainy day in December. At least the big warm up came when the kids were considerably distracted by the coming of Christmas; only the promise of anticipated presents could combat that disgruntlement.

As I watched the dreary weather through the bright Christmas tree lights, I knew the woods would soon be a mucky mess, and I wondered what was happening at the mountain.

I found out the next day, and it wasn’t pretty. Where a few days before all had been white, tinged with green boughs of fir trees, now there was entirely too much brown. All the natural snow was gone.

But where the snowguns had been at work during colder days – and nights – the trails were still covered, and I was thankful for the wonders of modern snowmaking and grooming. After two days of rain, the crews had put the mountain mostly back together, and the skiing Sunday was surprisingly pleasant. A cool down and a skim of snow had turned the summits to frosty white again, even if the yard remains devoid of snow.

The forecast looks like cold and a bit of snow in the near future. All’s well that ends well, right? Here’s hoping Winter is done teasing.

“You seem so excited about getting the Christmas tree this year,” one of my girls said to me last week as we sorted through our box of ornaments and contemplated where to hang each one. While some Decembers the tree trimming can seem as much holiday chore as happy tradition, it’s true that this year I was eager to get the tree up, to insert that key symbol of the season into the living room. 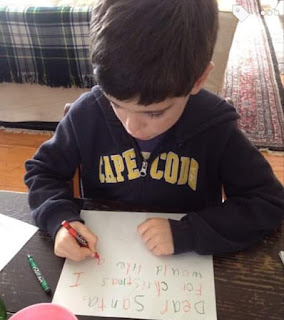 I figure this is because I can feel the shift of this season in my children, from pure magic to – well, whatever comes after the magic fades. And because I ran into a mom of older kids, the day we got our tree, who said her offspring don’t even want to help decorate the tree anymore. And because I remember getting there myself – reaching the age, somewhere in teenage-dom, where I didn’t really want to help with the tree anymore either, when hanging ornaments onto needled branches felt more tedious routine than joyful ritual.

My kids aren’t there. Yet. But I can see the writing on the packaging of Christmas future. So I am embracing this season as much as I can – and trying not to let the bittersweet-ness of growing-too-fast children seep too deeply.

Instead of dwelling (for long) on the photo from five short years ago that popped up on my computer screen recently – the one of my now-non-believing son writing his annual missive to Santa in large, uneven, red and green letters – I focus instead on his sister’s excitement of getting the Christmas decorations out and strewing them about the house.

Rather than worrying (too much) about the littlest exclaiming incredulously that so-and-so doesn’t believe in Santa OR elves, I focus on her sleepy-eyed fascination each morning with finding our own magical elf, Jingle. And try to ignore the fact that she’s already let go of the Tooth Fairy and the Easter Bunny, so Jolly Old Saint Nick is the only one left.

Although this season is busier than busy, I try (with occasional success) to step back, take a breath, and focus on the joy – and the goodness of that busyness. How lucky to be busy with things that I love – writing and coaching and being Mama – even if many dark winter mornings I long for a few more cozy minutes snug in bed.

Beyond the deadlines and shoveling and bills I wish I could ignore, there is skiing and cookie-making and finding and wrapping gifts and eating good food with people I love. My house smells like Christmas trees and ski wax – two of the happiest smells I know. And it sounds of children, sometimes fighting – with me or each other – but also sometimes, often, laughing and sharing stories and discussing which decoration should go where.

Shining lights fill the season – on the tree in my living room, from the glint of sunlight off snow, and shimmering in the so-dark winter sky. The other night, as we were driving through that darkness, my daughter looked out the window at the countless stars twinkling from an unimaginable distance away from our car, our town, our planet.

“There are so many,” she said, her voice filled with wonder. “They look like Christmas tree lights sparkling all around us.”

Perhaps, then, the magic of this most wonderful time of the year doesn’t fade so much as it shifts. Maybe it’s there to be found, no matter what form of magic we believe in, if only we look the right way, in the right places.