For as many summers as my children can remember, their California cousins have flown east from their suburban home across the country to the relative wilds of northern New England. The arrival of the California cousins – or the Tennessee cousins or the Texas cousins – is an eagerly anticipated event, one the kids talk about for weeks beforehand.

My mother, who is an only child, often says she doesn’t fully grasp the relationship between siblings, even after having raised three of them. I feel the same way about cousins. Considering both my parents come from Irish-Catholic families (and each has dozens of cousins), it seems incredible that I only have three first cousins.

I love my cousins dearly, but I’m stuck age-wise between them and their kids. We had regular family gatherings when I was growing up, but the age gap meant we weren’t running around together playing capture the flag or giggling like crazy over nothing much, which is what my kids spent much of the middle of July doing.

This year we met the California crew on Cape Cod – two families with kids ranging in age from 9 to 16 years, a pair of grandparents, and another aunt and uncle thrown into the mix – for a week of beach time. We returned home to New Hampshire to find my husband’s Texas cousins and their kids visiting, which meant a happy continuation of cousin fun.

The cousin bond is special – not quite sibling, but different than friend. Maybe it is the novelty of only seeing each other once a year (or less often), or a sense of familial loyalty, or that they share some of the same stories. Whatever the reasons, the kids fall into the relationship each visit as if it’s the most natural thing in the world.

In past years, when the California cousins are on the East Coast, the kids have established a regular list of things to do – hiking Bald Knob, kayaking Long Pond and looking for crayfish and salamanders, toasting marshmallows at the backyard firepit and watching fireflies flit through the summer night.

This year, we got to introduce the California crew to some of our favorite haunts on Cape Cod, where we’ve gone for a week each of the past eight summers. We visited old favorite beaches and explored new ones. We played mini golf in one of our regular (and not so busy) places and checked out a new course down the road from where we were staying.

We got ice cream at the same place my family did when my brothers and I were children and watched the kids run around on the beach we played on when we were little. We even found a new candy store to substitute for the annual cousins visit to Chutters.

From our rental house at the Cape, the kids could tramp down to the beach whenever they felt like it. They usually paired up – one New Hampshire kid, one California kid – in a revolving mix of personalities and activities. My kids look up to their older cousins, all teenagers now, and the older kids seem to appreciate the chance to do kid stuff for a week with a slightly younger crew – and no other teenagers to impress.

The timing of this year’s cousin visits from various corners of the country meant that bidding a melancholy adieu to the California crew was quickly followed by happy anticipation of hanging with the Texas contingent. Before we’d even walked through the door back home, the kids were clamoring to see their Texas cousins, who have visited the past few years.

Forget recovering from vacation, we jumped back in to communal dinners with 20 people – including 10 kids ranging from baby to 13 years old. There were impromptu soccer matches and rounds of hide-and-seek and other made up games. The kids piled into the pickup truck to drive through the field and visit the neighboring cows. There was plenty of general goofing around.

With all the kids growing older, I’m not sure how many more years of week-long summer visits we’ll have. But I know my kids will remember fondly these wild weeks of cousin fun well beyond childhood.

When I was 9 or 10, I beat an old man at cribbage, high on a mountain. I have no recollection of this encounter, but my father swears it happened, and so it must be true. 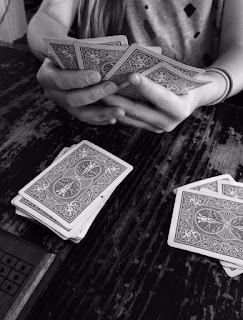 This was during one of my family’s multi-day hiking outings when we’d string days on the trail with a night or two at an Appalachian Mountain Club hut. Apparently, the old man was both thrilled and surprised to have been out-pegged by a little girl. Maybe he’d gone easy on me. I have no idea.

The cribbage story is one of the tales my family tells of these outings – along with my older brother’s disagreement with the green spaghetti we ate one night and my younger brother filling his small, teddy bear-toting backpack with rocks along the trail. So I remember it without actually remembering.

I also don’t remember learning to play cribbage, although I imagine this happened over a series of winter nights spent in Franconia, where we came to ski on weekends – and where, when I was growing up, our television received only one or two channels, and that only if the cloud cover was aligned perfectly over the unwieldy antenna on the roof.

In the absence of television and smart phones (heck, back then we shared a party line with the other half-dozen houses on our road), we either read or played games through the long winter evenings and the occasional summer nights spent at the house. There were rousing, post-supper, multi-generational rounds of Balderdash and Pictionary and Trivial Pursuit when friends were over. And, apparently, quieter and more contemplative contests over the cribbage board when fewer people occupied the living room.

Despite growing up in the digital age, my children have become quite the little card sharks in recent years. I will take very little credit for this, as I don’t have the patience to teach card games, with all their intricacies, to anyone. Some games I have learned – or re-learned – along with the kids.

My husband has taught the kids to play Hearts and what we call Bull Poop (rather than the more adult-language name for the game), along with a couple variations of solitaire. He and my parents have also worked to hone the kids’ cribbage skills. Friends have taught them to play Kings in the Corner and Beggar My Neighbor.

Most nights after dinner, at least one of the kids asks to play some card game or another, and in these summer evenings that seem to stretch long between dinner and bed, we usually fit in a round or two of something.

Already, the children have developed a sense for card game strategizing that often escapes me. They delight in holding the Queen of Spades and giving her away at the perfect time in Hearts, and they usually know someone is trying to “shoot the moon” before I do. They can often tell when someone is bluffing at Bull Poop and have learned to count ahead to see which cards they should try to unload at which turn.

It is only at cribbage where I feel I have a slight advantage, but I may be fooling myself here. My older daughter tallies each hand quickly in her head and sometimes knows my score before I have finished counting it out. Both she and her brother have beaten me in cribbage fair and square. (I have never been the mom who lets her kids win – except, perhaps, when they were tiny and wanted to play Candy Land, and I tried to organize the cards so the game wouldn’t last to the point of boring me to tears.)

Last week, the littlest one wanted to learn to play cribbage. She played against a sibling with my husband’s help and was soon ready to tackle the game solo. In her first game on her own, she beat me, and was on the way to skunking me before I managed to close the gap in the last hand.

I think there’s probably some educational value in the card-playing – basic math, planning ahead, having to choose what to keep and what to let go. Mostly, though, it’s just a fun way to pass the time together – wherever we are. A deck of cards slips easily into a pocket or a purse – or a backpack.

Later this summer, we have a two-night hut trip planned in the mountains with another family of card-playing friends. We’ll pack a couple of decks of cards and our smallest cribbage board. Perhaps one of the kids will challenge a stranger to a round, and that will become part of the story we tell many years – and many rounds of cribbage – from now.