The heat kicked on one morning this week (with the thermostat set at a frugal 55 degrees) and there’s a possibility of snow in the weekend’s forecast. Like it or not – and I know plenty of folks on both sides – winter is coming. 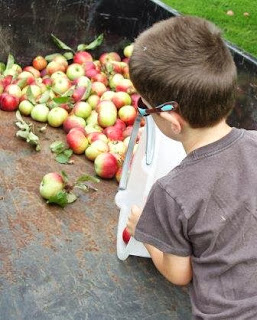 The uncommon warmth of the mid-October days this fall lulled me into a sense of continued summer, even as the leaves dropped from the trees and the mornings grew dark. While I’ve been able to slack a bit in preparing for the coming cold, I’ve noticed the animals scurrying about, gathering autumn before it’s too late.

I can hardly drive down a back road these days without slowing for a squirrel scampering to hide his winter nuts. The woolly bear caterpillars, so plentiful a few weeks ago, have gone into hiding. We see bear and deer under the apple trees each evening, filling up on the season’s abundance. The summer cacophony of birdsong has faded to the occasional melancholy cooing of a family of mourning doves that has set up residence in the apple trees nearest the house and the stalwart chickadees who stick around all year.

Following the animals’ lead, I will pull the last of this year’s carrots from the ground this week and pick the final handful of green peas – both products of a Hail Mary planting made well past midsummer. The rest of the garden is cleared out, raked smooth, and put to bed for the coming winter, the bounty of wild blueberries from the summer tucked away in the freezer and the applesauce put up in the pantry.

It was an odd year for gardening and gathering. The summer started hot and wet, the heat luring me to plant early, the wet saturating many of those first seeds beyond the ability to sprout. And so the garden was a bit of a flop for much of the summer. The peas came in well and seemed to promise more good things to come, but they faded fast. The green beans were nearly nonexistent until my third planting, when persistence finally paid off with a decent, but not spectacular, harvest. The broccoli was a bust, the cucumbers sparse, the carrots so-so. I didn’t even have enough zucchini to give away.

Nature, on the other hand, provided in abundance all summer and into fall. We found the first wild blueberries the second week of July, and we picked through the final muggy breath of August. The blackberries provided a decent yield, just as the blueberries began to wither. And in nine summers at this house, I’ve never seen so many apples weighing down the branches of the gone-wild trees dotting the back field.

Feathered, furry, or bundled up in increasing layers of clothing, we all spend time during this in-between season gathering autumn, whether savoring the waning warmth of the sun or storing away the fruits of fall, tucking them into root cellars, dark freezers, or squirrels’ dens. As the bears load on an extra layer of fat, we dig out our winter boots and heavy jackets. As the woolly bears curl up against the cold, we replace screens with storm doors and windows. As the deer eat all the fallen apples they can find, we have cooked ours into sauce, filling the kitchen with the warm scent of cinnamon.

Even as I lament the passing of one season, I am usually ready to welcome the next. And, so, as I miss the colors of fall and bemoan the gathering darkness of the approaching season, I am also looking forward to winter. In the darkest days of the year, as the wild ones hide away, we’ll bundle up against the chill and head outside to ski and sled, build snowmen, and feather snow angels into the crystal whiteness.

By the time the winter solstice arrives, we’ll have mostly forgotten to miss warm days and green grass, distracted by the glow of Christmas tree lights and hot cocoa by a warm fire. And at winter’s end, just when it seems we can’t handle another gray day, leaf buds will form on tree branches, the first crocuses will poke through thawing ground, and the birds will return with their colors and songs, carrying with them the next season, another chance to savor new things and start all over again.

Original content by Meghan McCarthyMcPhaul, published on her Blog: Writings from a full life. This essay is also featured in Meghan's Close to Home column in the October 25, 2013 issue of the Littleton Record.

Posted by Meghan McCarthy McPhaul at 6:03 AM No comments:

A blustery autumn wind blew the power out Monday night, and with it went the lights, my Internet connection, and such other modern luxuries as flushing the toilet and running the dishwasher. The electricity was out for only a few hours, enough time to be a minor annoyance, but not long enough to miss taking a shower or to lose the summer’s bounty of berries stored in the freezer. 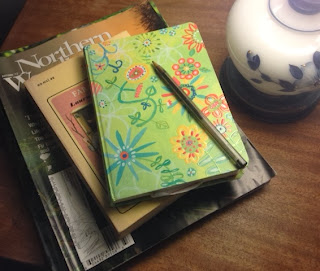 We lose power a handful of times throughout the year, most often in winter, but thankfully not usually for very long – anywhere from a few hours to a couple of days. With the nuisance factor of a power outage comes the opportunity, by necessity, to alter how we do things. These brief power outages offer a change of pace, a chance to rediscover the allure of reading by the soft glow of candlelight in a normally lit-up world, and a renewed appreciation of some of the flip-of-a-switch conveniences we take for granted.

Because our kitchen has a gas stove, cooking without electricity requires only some minor adjustments – a book of matches and a camping lantern by which to see. We keep a two-gallon jug of water in the pantry for such occasions and a slew of flashlights scattered throughout the house. Because I’m a caffeine junkie, I have two back-up, no-electricity-required systems for brewing my morning coffee. Only recently have I obtained a smart phone, which allowed me during this latest outage to check email, keep in touch with my working-late husband, and call PSNH to see when the power might be back on.

Losing power no longer means being isolated from the news of the world or the happenings down the road. All in all, it’s not so terrible, really; like most things, it’s all in your perspective. I try to take a cue from my children, who consider the mandatory darkness an adventure. The kids enjoy eating at a table lit by candles. They take glow sticks to bed in the absence of their normal nightlights. Reading bedtime stories by lantern light makes them feel like they’re inside the pages of Little House on the Prairie, even if our lantern is powered by batteries and lit with LED bulbs instead of kerosene and a wick.

The spring our twins were infants a Nor’easter knocked trees and power lines down, and we were without electricity for three nights and four days. It was mid-April, but still winter-cold. We blocked off the two entries to our large living room with old blankets, lit a fire in the fireplace, drained the pipes, and hunkered down through the storm.

The babies were only three months old then, so sleep was already a scarcity for my husband and me, which made waking to feed the fire every hour or so through those cold, dark nights just one more middle-of-the-night chore. While my husband absconded each morning to his office, where there was electricity and a hot shower, I remained at home in the living room. When I look back on those few days, I don’t recall how much of a hassle it must have been to change diapers and feed myself and my children in a chilly house without electric lights or running water.

What I do remember is that, unable to vacuum or do laundry or the dishes, without the distraction of the Internet (no iPhone back then), and before I had returned to paid employment, I read my way through a few books and a couple of magazines. I soaked up the quiet and the warmth from the fireplace and snuggled into a nest of blankets with my new children, the dog, and the two cats.

I also remember the morning after the power came back. The winds that had shaken our house a few nights earlier and knocked the power out were gone, along with the mechanic hum of the neighbor’s generator. I bundled the babies into the stroller, grabbed the dog’s leash, and we headed out into the welcome spring sunshine. Birdsong mixed that bright, calm morning with the buzz of chainsaws as crews continued to clear downed trees from roads and utility lines.

That day I did lots of laundry, ran the dishwasher, bathed the children. I was relieved by the return to electricity and running water. I had a new appreciation of central heat. And as night fell, I was thankful for such a little thing as flipping a switch and being flooded in light.