At the end of the day we were cold, sopping wet, and exhausted. The 3rd and 4th grade soccer team I coach had played five games over the course of 10 hours. They’d experienced soccer firsts – three penalty kick shootouts, one last second (literally) goal, and a sudden death overtime – which is a lot to throw at 8- and 9-year-old kids. They handled it all like champs, and I bet this is a day they remember for a long while. 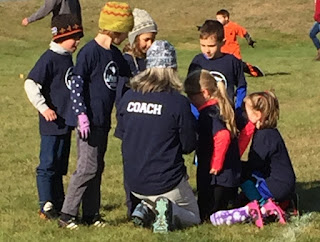 I love soccer, have loved it for as long as I can remember. The game has been an integral part of my life from childhood onward. Soccer led me to friendships in high school and focus in college. It introduced me to places and people I wouldn’t know without it – in Europe during a brief high school tour, in Colorado when I moved there after college, and in Connemara where soccer became a comfortable connection to a place far from home.

I started coaching when my kids were in kindergarten because I wanted to introduce them to the sport. Over the last five falls, I’ve had the privilege of introducing their friends and teammates to soccer, too. Coaching is a labor of love – and of balancing various skill and interest levels, kid-sized attention spans, and parental expectations.

Sport can be transformative, and as a coach of young kids, I get to witness that transformation up close – both in my own children and in their teammates. I am fully aware that the kid who is a complete goofball in 2nd grade may morph into one of the strongest players in 5th grade, and that the one who is the biggest and most coordinated in 1st grade won’t necessarily be the strongest in 6th grade. I know that the 4th grader who has never touched a soccer ball before, but who comes to practice all season and pays attention and works really hard is going to make steady improvements.

Through soccer I get to watch my older daughter, who loves fashion and embraces femininity, transform into this tough girl who will dribble through opponents and fight for 50-50 balls against kids much bigger than she is. It is no wonder that her soccer idol is Alex Morgan, who somehow always looks as if she’s just stepped out of the beauty parlor, even as she’s burning her soccer opponents and scoring goals.

I watch my son tackle the sport with a completely different mindset, steady in the backline, confident now in taking command of a defense. Where my daughter is all bursts of speed and changing pace, my son is methodical, thoughtful, steadfast. Never one to be left behind, their little sister, whose soccer season ended two weeks ago, practices push passes against her dresser when she is supposed to be getting ready for bed. I know I could just take the ball out of her room, but I kind of love that she wants to play soccer all the time.

I have watched their friends grow through the sport, too, seen them transition from clumsy kids with too-big shin guards to soccer players who pass the ball with confidence, make moves, support each other. Saturday I got to see one group of kids overcome nerves and bad weather to play together as a team. Three times I watched five of these children step up to the penalty kick spot and take their best shots. I got to share in their relieved exaltation when they scored, and I knew their frustrated disappointment when they missed. Fifteen times, I watched our young goal keeper of the day stand, sometimes on the verge of tears, and face PK shooters from other teams.

Soccer can be a tough sport, and coaching is not always easy. It makes for sometimes hectic family life, frenzied dinners thrown together between practice and bedtime, and a week’s worth of homework crammed into non-soccer days. I spend more time thinking about the teams I coach and their young players than I probably should. And each year, somewhere about two-thirds of the way through the season, I wonder why I do this to myself. I think, sometimes, how much simpler it would be to just drop the kids off at the start of practice and pick them up at the end.

But I don’t think I could do that. I love the game too much. I love seeing the kids, my own included, develop a love of soccer and an understanding of how to play it. I love when a 1st grader tells me she’s done her soccer homework, and when a 3rd grader proudly shows off his new goalie gloves, and the smile from the kid who always says thanks at the end of practice.

Saturday, our team lost in the finals of the annual Halloween Cup on our home field. We were cold and wet and bone-tired. But I think the kids felt a sense of accomplishment at making it so far. As I watched these young soccer players disperse into the pouring rain of a darkening night, huddling under umbrellas held by their faithful fans and climbing into warm cars, I felt proud of their growth over the season and their perseverance through a long day. And I felt lucky to be their coach.

Hope is a Puppy

If Hope is the thing with feathers that perches in the soul (as Ms. Dickinson claimed), I think Joy must be the thing that clings to Hope’s wings when it rises into flight. 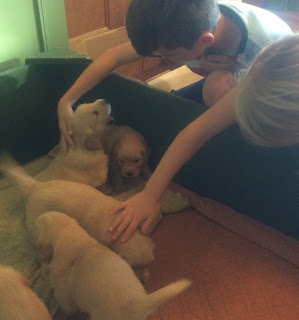 I’ve been thinking lots about hope and joy – and sadness, too – as we prepare to bring a new dog into our home. It’s been two months since we lost Lily, our beloved dog for more than a dozen years, and I still find myself looking for her in the regular places several times a day, anticipating her greeting when I return home from someplace else, then feeling my heart sink when I realize – again – that she’s not here.

For weeks after Lily died, my son would ask daily when we could get another dog. Nearly as soon as the question was out of his mouth, he’d say tearfully, “I miss Lily.” That conflict of simultaneously missing Lily and longing for a new pup is something we’ve all felt: when (after countless hours of searching and contemplating and – yes – crying) I told the kids we were going to get a puppy, my older daughter’s eyes brimmed with happy, relieved tears; and a few hours later, my littlest one began sobbing at the dinner table, too distraught over Lily’s persistent absence to eat.

Nothing feels quite right without a dog in the house. And while Lily was a one-of-a-kind girl, a dog we know we’ll never replace, the idea of a puppy has been comforting to all of us. It has allowed us to transition beyond our sadness, moved us from looking back to looking forward.

Just a couple of weeks ago, my solo walks in the woods – a place I’d wandered for years with Lily’s companionship – were excruciatingly lonely. Now, I think of Lil in all her favorite places and remember how she loved these walks. But I think, too, of days in the not-too-distant future when there will again be a dog wandering with me, an easy and content companion.

I felt a somewhat desperate mingling of happy and sad when I first contemplated bringing a puppy into our home, a feeling bordering on guilt. Guilt because getting another dog seemed like an attempt at replacing the irreplaceable. And guilt because this hope – for love and loyalty and lifelong companionship – seems a lot to place on a tiny puppy, who will be following in the paw prints of a pretty amazing dog.

For my husband and me, Lily was the first dog we had as adults, the first important responsibility we assumed together. For my children, Lily was the only dog they’ve known as part of our family. Lily knew them – and loved them – all of their young lives. But they didn’t know Lily all of hers, only arriving when Lil was already grown. This puppy, this little bundle of fur and hope, they’ll know for her whole life, from puppyhood to those calm (we hope) middle years to old age.

This will be the dog they grow up with, the one they’ll remember best. They’ll mature together and play together and, I hope, become steadfast pals.

There is work, of course, that comes with raising a puppy: house training and no-chewing-the-furniture training and lessons about not jumping and no biting. For years (I hope) there will be endless fur to vacuum and smelly things rolled in and other puppy shenanigans.

It’s all a small price to pay for the love of a good dog.

“Next year we can bring our puppy on this hike, right, Mama?” one of the kids asked me the other day during a short uphill jaunt – the hike that was the children’s first, and Lily’s too. Yes, next year we can bring the puppy with us – on hikes and car rides and contemplative walks through the woods. Next month she’ll be here. Soon, there will be a wagging tail to welcome us home again.

We haven’t yet decided on a name for our puppy, and I won’t be surprised if we five humans are still debating the right moniker right up to the day we bring her home. Maybe we’ll call her Hope. Only this Hope will be a thing with fur that romps happily about, ready to share our home and family adventures. Puppies don’t sing, but they smile and they yip and they wag their tails; they are just as persistent in their joy as Emily Dickinson’s thing with feathers.