I was in the kitchen cleaning up after dinner when I heard the cra-aack! I knew before I made it outside that the gusty storm winds had taken down what remained of the old red maple tree in the front yard. 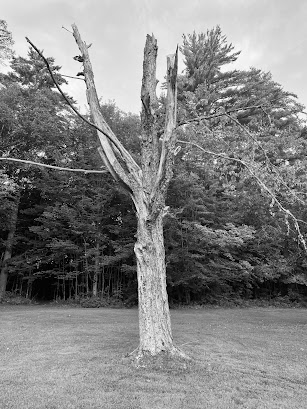 The tree’s final demise was a long time coming. It is – or was – the middle (and largest) of three red maples near one edge of our yard. All three took root long before we lived here – I’d estimate this tree even outdates the house, which is nearly 100 years old. When we acquired the house, the trees stood in a field. Our first year here, we converted part of that field to a yard with mown grass, initially to hold a wedding tent. Over the past 13 years, the yard has played host to an array of kid things – hide-and-seek, fairy house construction, made up games, and lots of soccer.

In the center of it all stood this tree, with three large branches splitting off from the main trunk, reaching up toward the sky and out over the yard, providing summer shade, fall color, and a landing place for birds returning to the neighborhood in spring.

Several years ago, one large section of the middle maple’s trunk cracked and crashed down during another storm. And a few years after that, a second segment fell. It seemed every icy winter gale or summer storm took another small branch or two until only one of the main sub-trunks was left.

Still, the leaves from that living branch contributed to the large piles of crisp and colorful leaves the kids raked up to jump into over many autumns. And one year, in late winter, when those kids were very small – and the maple still more alive than dead – we tapped that tree and a the other red maples to gather sap for our driveway sugarmaking operation. (Yes, you can make maple syrup from red maples, too, and you can do so in a large pot atop a propane grill. Not the most efficient method, but good, clean, really sweet family fun.)

Probably because of its declining health, this maple tree was always the first to sport red leaves, usually right around this time of the summer, well before any of us is ready to think about fall. Over the last few years, it’s become a home to various fungi, a slew of bugs roaming around beneath its bark, and the woodpeckers who eat those bugs.

The day after the storm that took the last living limbs from the tree was calm and bright and sunny. A perfect August day. The only evidence of the squall that had raged through the night before was the mess of maple limbs and bark and leaves strewn beneath the tree – and our ongoing power outage.

This weekend, my husband powered up the chainsaw, my son powered up the tractor, and we cut and hauled the fallen leafy branches and the rotted bits down to the burn pile in the lower field, and stacked a few dozen round logs, already seasoned and the perfect diameter for the fireplace, onto the woodpile.

All that’s left now of the old red maple is the tall, broad trunk, ending in a jagged point of dead wood. The remains of the three main branches, stripped of bark, rise like gnarled fingers around the trunk. They no longer offer shade to those beings passing below, or hidden perches for the songbirds who flit around the yard, or sap for would-be sugarmakers. Someday, even the old trunk will come down.

For now, we’ll leave it where it still stands – for the moss and lichens and fungi adorning its remaining parts. For the woodpeckers still finding snacks within. And because the old maple has been a part of this landscape for a century or more, and we have grown used to it being there.

Posted by Meghan McCarthy McPhaul at 7:13 PM No comments: