Twenty years ago this month, I landed in Franconia. This place was already familiar, as I’d spent all of my childhood winters skiing at Cannon and rare summer days splashing in the cool Ham Branch and climbing the mountains nearby. 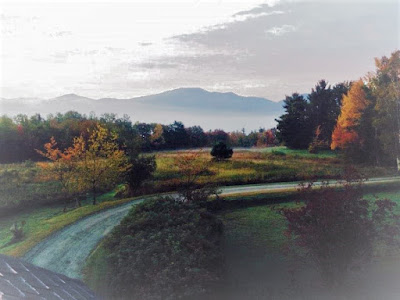 But it wasn’t home.

I arrived in Franconia late on a mid-October night after a cross-country drive with my mom, who’d flown out to Colorado to make the long trek back East with me. Except for a few boxes of stuff I’d shipped, everything I owned – including my somewhat neurotic cat, Fiona – was crammed into my little Subaru.

I was 27, fresh off a six-month stint guiding horse treks and waiting tables and getting pretty close to blending into a small town on the west coast of Ireland, where I was known alternately as “the horsey girl” or “the Yank who plays soccer.” The five years prior to that I’d spent in Crested Butte, Colorado, working ski town jobs to live a ski town life of sliding through snow all winter and hiking and riding my mountain bike all summer.

I could have stayed in those mountains forever, but I didn’t. I thought – twice – that I was on my way to grad school. Instead, I decided to return to Ireland, the place of my ancestors and where I’d spent a summer during college – a place I’ve seen in my dreams all my life.

Now, here I was, five years out of college, adrift. I’d spent the better part of the past week saying goodbye – first to the craggy coastline and my friends in Renvyle, then to the tall mountains and my Colorado friends. I had developed some sort of hybrid accent during my six months abroad, so even my voice seemed strange. All of my worldly possessions were crammed into a small car. I was essentially homeless and jobless – and broke.

If you had asked me then where I thought I’d be in 20 years’ time, I guarantee the answer would not have been, “Franconia, New Hampshire.” This was just where I was going to crash for a while, staying with my parents, until I figured out the next thing. I thought I’d end up somewhere bigger. Portsmouth, maybe. Or Portland. Or Concord. Definitely somewhere in northern New England, much, I believe, to my mother’s relief.

When I went west to Colorado, my folks thought I’d be gone a season, maybe a year. When I told them half a decade later that I was heading to Ireland, I think they thought two things – one, that I had lost my mind (or at least my drive), and two, that I was never, ever coming home to New England. I may have considered those two things in my own mind, too.

But in that funny way that life has of nudging us in unexpected directions, it was my time in Ireland that led me back to New England. I loved Crested Butte, and for five years that quirky little town nestled into big mountains was home. But I knew I was done waiting tables and working retail and helping to take care of the very expensive, very big houses of people who spent a few weeks a year there. I’d grown tired of the job prospects (or lack of), and of the new crop of 18- to 22-year-olds who arrived in town each fall, even if I’d been one of them not that long ago.

Renvyle had also felt like home. I had friends and work buddies and my soccer teammates. I had green fields and wild hedges of gorse and fuscia and the smell of the sea almost everywhere I went. But I did not have a work visa and was therefore limited in my ability to make a living. I stuck to my original plan of staying for six months, which meant I boarded a plane just weeks after 9-11. I cried miserably at the airport gate and felt as if I’d landed in another world – not returned home – when I arrived hours later in Denver.

Sometimes, those years in Colorado and the months in Ireland seem like a different lifetime. But my time in both of those places, the experiences I had there, the people I knew have become a part of who I am, of the way I think, of how I view my world.

And yet, it seems, I am a New Englander through and through. Sure, I grew up in a different part of New England, in a different sort of town – one with several main highways passing through it, with fast food joints and a real downtown and traffic lights (and even a good old New England rotary). But the landscape of my heart includes old houses and white-painted steeples, farms and forests, mountains and lakes and the sea. I would be lost without apples and colorful leaves in fall, snow in winter, mud and pastel blooms come springtime, and the heat and humidity and sprawling green of summer.

When it was time to set down roots, I did it here, in a place that had not quite been home, but was close. Franconia is partly the sort-of-home of my childhood and fully the one I chose as an adult. It is here that I have spent a large chunk of my life – more years than in any other place – building a career, raising children, growing vegetables, finding a community.

For years, when people would ask me where I was from, I’d hem and haw and give some roundabout answer about growing up in Massachusetts, childhood winters in New Hampshire, college in upstate New York, time in Colorado and Ireland. Now, though, if someone asks, “Where’s home?” the answer is easy: Franconia, New Hampshire.

Posted by Meghan McCarthy McPhaul at 6:40 AM No comments:

Out With a Fizzle

Monday morning, the alarm clocks went off early in our house, and three bleary-eyed kids rolled out of bed and into their first-day-of-school outfits. In the kitchen, they jockeyed for counter space as they packed lunches and assembled breakfast. Binders and notebooks and freshly-sharpened pencils were packed into backpacks, along with lunchboxes and soccer gear – and maybe a little bit of first day anxiety.

And then – after the obligatory photos, of course – off they went, to another new school year.

Each year it takes me a while to adjust to that first-day quiet: the calm after the storm of back-to-school prep and the bustle of getting out the door early in the morning. When the kids were little, the first day of school set me to melancholy; the start of each school year was another reminder of how fast they were growing, and I lamented moving from the easier pace of summer days to the more scheduled – and busier – days of the school year.

This year, though – despite the shocking fact that those once-little kids are now in high school and middle school – I’ve been ready for the return of the school year. The past two summers, and all through last year, I’ve been working remotely. I’m thankful that I’m able to do so, but even with kids who no longer really need me for the day-to-day nitty-gritty, it’s been a bit of a grind. Those just-one-quick-question interruptions, times three kids, times multiple “quick” questions each – well, let’s just say that while I’ll miss the kids, I’m happy to return to my not-so-many-interruptions workday atmosphere.

This summer also went out with more of a fizzle than a bang. We returned from a week on the Cape to trade in flipflops and sand for soccer cleats and lined fields. At least the kids did. I mostly fit in work around driving this one and that one and the other one to practices, which were somehow almost always at different times and places. The high schoolers started with double sessions two days after our arrival home. The littlest started a week later. Throw in annual physicals, back-to-school haircuts, a dentist appointment, outfitting everyone with clothing and school supplies, and a day at the vet for the dog, and the last two weeks of summer were hardly footloose and fancy free.

I’m not sure the kids were quite ready for summer to end. But they’ll get into the school swing of things soon enough. And while I’m fully aware that the school year family logistics will be no piece of cake, I’m happy to be back to the relative calm of that 8 a.m. – 2 p.m. part of the day.

Posted by Meghan McCarthy McPhaul at 6:34 AM No comments: