It’s hard to tell how many pumpkin plants are growing in the tangle of thick vines and giant, prickly leaves at the west end of the vegetable garden. I didn’t plant any of them. At least not directly. The vines, just tendrils at the start, really – delicate and green – sprang from the compost pile after the potatoes and zucchini, eggplant and cucumbers, green beans and carrots had been planted. Those curling shoots, dainty as they were, stood in unruly contrast to the tidy rows of seeds and seedlings tucked into the spring garden. 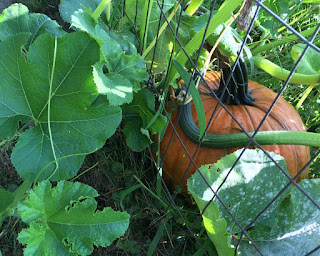 At first I wasn’t sure what was growing from the fertile pile of discarded greens and kitchen scraps in varying degrees of decomposition. Could it be summer squash? Cucumbers? Certainly something in the Cucurbita family. As the leaves grew wide, and huge, orange flowers unfurled, it became clear these were pumpkin vines, no longer delicate, but thick as my thumb and growing fatter by the day.

From a multitude of flowers emerged a single pumpkin. A baby: no bigger than a gumball, streaky green, and clinging serenely to a swelling vine.

I struggled through recent memory to figure how a pumpkin ended up growing from our garden compost heap. I remembered the deer – our Winter Deer, we called her – who frequented that heap from first snow late last fall until the drifts got too deep to traverse from forest to garden. It was the discarded Jack-O-Lantern, chucked into the compost, that initially attracted the Winter Deer; we first spotted her near dusk as she nosed through the wire fence at the frozen, orange shards. Soon she was visiting several times a day, leaping into and out of the garden, and ruining the fence in the process.

But the inadvertently planted pumpkin seeds would have arrived earlier in the fall, before the ground had frozen, when we carved farm-bought pumpkins and tossed their slimy, many-seeded innards atop the compost pile.

Comprising the discarded bits of many fruits and veggies, the compost heap often sprouts haphazardly with volunteer plants during the summer. I am always amazed these seeds can lie dormant through the frigid winter and soggy spring and still germinate come warmer weather. I regularly pull unplanned potato plants, stringy tomato seedlings, and opportunistic onion greens from that corner of the garden where we throw the scraps. But something inspired me to leave the pumpkin vines be.

At first it was mere curiosity, a desire to discover what was growing there. When the tiny pumpkin appeared, I figured we’d watch it for a while to see if it would survive – and whether other tiny green orbs would swell from the vines.

Our lonely pumpkin has grown steadily through the summer and is now beach ball-sized and almost completely orange. Its size and near-perfect shape seem fitting for a midnight transformation into Cinderella’s carriage, if only we had a fairy godmother in the neighborhood.

For weeks it seemed that was the only pumpkin we’d have. The vines stretched beyond the deer-wrecked garden fence into the yard, across the blueberry bushes in the garden, over the first row of potatoes (which I was thus inspired to dig early), and on toward the beans. Scores of flowers opened, and I peered through the lush leaves at each new bloom, looking for that little bump that would mean another pumpkin. (I do, after all, have three children; one pumpkin is not going to cut it.)

Alas, the pumpkin remained alone, one giant squash amid all those leaves and blooms. Until last weekend, when I noticed one more small, green, baby pumpkin on a section of the vine twisting through the fence and onto the lawn. Then I saw another, and another. I counted a dozen new pumpkins: late bloomers in this early September heat wave, but there nonetheless.

It seems unlikely they’ll all grow large and ripen before the air turns frosty and everything remaining in the garden withers to brown. Despite this week’s heat, after years of New England life experience I know the temperature may plunge any day now. But the new pumpkins are growing fast. Some of them are already nearly the size of tennis balls.