The other day I walked into the living room to find my three children embroiled in an intense game of Uno. The scene reminded me of a line from an Anna Quindlen essay, where she muses that perhaps she’d had three children so that she wouldn’t have to play board games and could instead pursue some other diversion, like curling up quietly with a good book, while the kids entertained themselves. 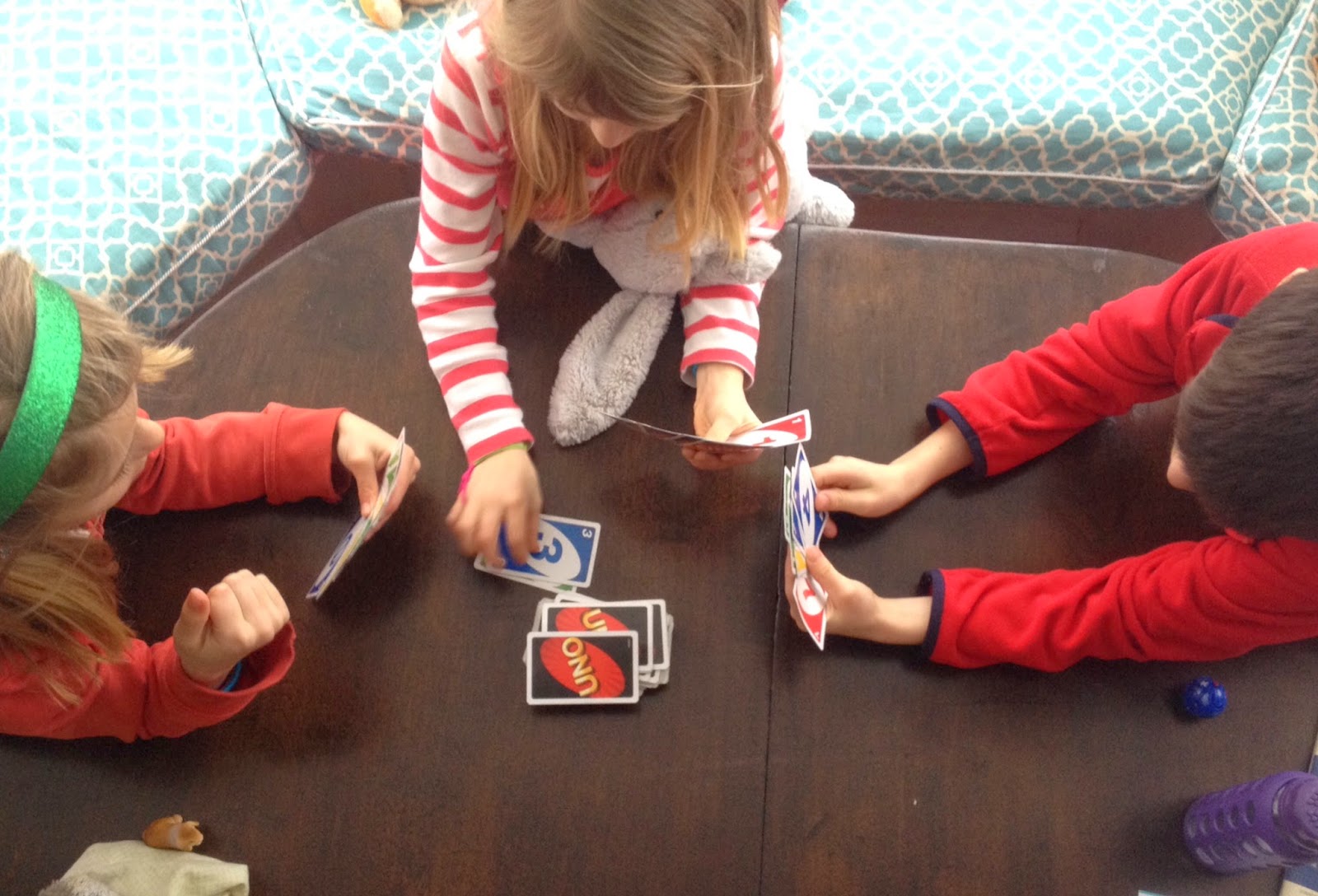 Learning to entertain themselves – and each other – is a skill I’ve long encouraged in my children. I may not be sitting down with a great novel while they’re playing games, but it allows me some time and quiet to tend to other tasks (like finishing this column). There are other lessons to be learned from playing games, not least of which is how to win – and lose – gracefully. There’s also patience, thinking ahead, math skills, paying attention, and keeping your cards (literal and figurative) close when necessary.

The first game beyond Candy Land (ugh) and Memory we tackled was Clue. That was my husband’s idea, and I figured the kids would quickly lose interest amid the vague and sometimes conflicting evidence of “who done it.” But my husband often presents the kids with challenges (and, sometimes, responsibilities) I’m not sure they’re ready for, and they usually handle these just fine. Playing Clue was no exception, and they soon grasped the game’s complexities. He also introduced the kids to Monopoly, a game, like Candy Land, for which I have little tolerance, although perhaps that’s just a reflection of my aversion to shopping and economics.

The kids have also picked up Old Maid and Dominos and this winter discovered Rack-O, another oldie-but-goodie my mother pulled out of some closet where she keeps relics from my childhood and hers – books and dolls and Matchbox cars and my brothers’ old Legos – unearthing them at  appropriate times.

Over the weekend, my husband taught our older two children to play cribbage, a game full of math and strategy and second chances. It also happens to be my own favorite game. My father taught me the intricacies of cribbage when I was about the same age my children are now. Before long, we were playing the cutthroat version, where if your opponent misses a point and you catch it, it’s yours for the taking.

Back then we came north from our Massachusetts home for ski weekends and summer vacations. Here, there was no television – or, at least, only two very fuzzy channels. So we often passed the evenings playing games. Cribbage, Sorry!, Yahtzee. If friends were over, we’d bring out the Pictionary board or a game of real and pretend words called Balderdash, which always ended in gasping-for-breath fits of laughter from both the kids and grown-ups gathered around the table.

The game playing in our house has not reached quite that level of silliness, yet, nor is it always harmonious. There is sometimes squabbling over whose turn it is and occasional accusations over someone breaking the rules or peeking at opponents’ cards. If one child settles into a winning streak, the others are likely to become frustrated. Sometimes a bad hand is chucked across the table and the game abruptly ended. But they’re learning, with practice, to celebrate a win, then move on. To regroup after a loss and try again.

Each of my children seems to favor a different game. The littlest one is especially taken with Uno, which involves tactical thinking, but no math or reading. She’s ruthless in her play, impishly laying down plus-2 and plus-4 cards, letting out an exultant “Yyeeessss!” with each victory and a mild “Hmph” at a loss. My son thrives in the long game and careful rumination of Clue and Monopoly. My older daughter enjoys the challenge of figuring out which combination of cards to keep and which to throw into the “kitty” in cribbage.

All of them giggle gleefully when they have a good hand or draw a valuable card. They give too much away with giddy grins and disappointed frowns. I guess, with all the lessons being learned while playing games, we still need to work on the importance of a poker face.

My children were in the yard basking in the March sunshine, still bundled up in snow pants and parkas one recent afternoon when my daughter announced she was tired of winter and wanted it to be spring. The kids started talking about all the things they love about warmer weather months: butterflies and kayaking, the chorus of spring peepers from the pond nearby, eating ice cream on the porch after dinner.

This daydream of spring was momentary, and soon the kids were embracing winter again, jumping into some game that involved snow and imagination, with white tigers, sled dogs, and arctic seals overtaking the tunnels and caves and sliding troughs of the snow fort.

I am just as conflicted during these in-between-seasons times: simultaneously longing for the season that will be here eventually, and wistful for the one that will soon pass. In March, I strive to squeeze in as many wintery things as I can, and I dream of warmer weather hikes and bike rides, green grass and flowers, walking outside without having to don extra layers against the chill.

As winter, which certainly still has long to linger, shows signs of a slow fade, we get down to our favorite cold weather fun before it’s too late – often with the benefit of warmer days and sun on our faces. Last week, before the temperature warmed enough to melt the ice, we embarked on an after-school outing to the town skating rink, where the kids and their friends glided and stutter-stepped around the ice, ditching outer layers in the relative warmth of a March afternoon.

Over the weekend my husband dragged two old toboggans from the garage, where they’d been gathering dust for a few years, and we carted them just up the road to a hill where he used to sled as a kid. With friends and dog we reveled in an afternoon of flying downhill on something other than skis. Once the track was set, the old toboggans and newer plastic sleds flew right across the car-less road and over the snowbank on the other side. Laughter and screaming giggles were the day’s soundtrack. Several climbs back up through deep snow made for tired, but very happy, kids – and parents.

With the end of ski season clearly on the horizon, I am scheming as many more runs as possible. It’s been a fine ski season, with lots of snow, uncharacteristically fluffy for New England, and the cover is still good, even in the trees, which is where the kids like to be. In January and February, I may sometimes skip a ski morning to complete some other, more necessary, task. In March there are no excuses: ski now, or wait until December rolls around again.

Soon will come that early spring day when the kids return home from the mountain and pull their bikes from the garage for an après ski spin. By then the driveway – now a sheet of ice in various stages of melting and refreezing – will be a mire of mud and puddles, and the front hall a confused jumble of mud boots and snow boots, ski pants and raincoats, winter hats and ball caps.

For now, the icicles continue their steady drip, and the snowbanks shrink slowly. The chickadees’ song becomes louder and more constantly present. The March wind rushing through the trees holds both the stubborn chill of winter and the promise of the coming spring, and our thoughts shift on that breeze from one season to the next.