Our group must have looked quite the spectacle from the tram cars: a gaggle of the littlest ski racers making their way down the mountain’s toughest trail. A few of our crew ripped right down D.J.’s Tramline, not the least bit phased by the rock drops and snowy bumps as high as the skiers who were maneuvering around them. Others struggled – more with their own nerves than with the technicality of the skiing. These are, after all, Cannon kids; they’ll ski just about anything. 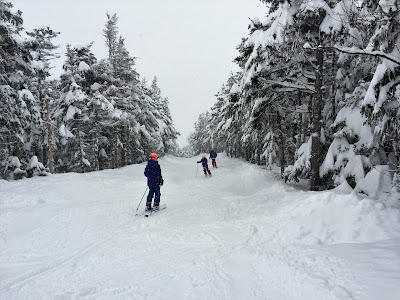 After the descent, as we stood between the tram car docks waiting for a ride back to the summit, I had the kids look up at the trail they’d just skied: strewn with boulders and exceedingly steep in some areas. Whether they’d been the anxious ones or the confident skiers moments before, they all seemed to puff up just a little bit gazing back up the mountain.

That was my first time down Tramline, too, and it was, until Saturday, the only trail on the mountain I hadn’t skied. At least the only one on the trail map.

That trail map has changed a good bit since the days when I was one of the littlest ski racers here. Maybe it’s because I lived (and skied) away during college and for several years after that, or because I’ve been exploring the mountain with my own kids as they have grown and progressed in their skiing prowess, or because I coach with a guy who knows every nook and cranny here – on the trail map and off – whatever the reason, I find joy in this adventuring.

Last Wednesday my kids had a rare snow day from school, and we spent a good chunk of it at Cannon, arriving to find snow so deep it was hard to open the car doors (and we later had to dig said car out of the unplowed spot we’d parked in early that morning). We made one run down a wide-open trail before the kids dragged me into the woods, and we spent the rest of the day exploring.

I grew up skiing this mountain, although we were weekend commuters, so too far away to make it on a snow day from school. Back then, there were no glades. Sure, there were a few secret stashes off the saddle between Cannon and Mittersill, and once the latter area closed and the forest grew back up around trails and lift lines, there were some hidden spots there, too. But certainly nothing on the trail map.

Now Cannon lists 22 glades on its trail map, ranging from short, beginner woods runs to long, tight, tricky tree skiing. Wednesday we headed to the top to ski the glades there, then over to Mittersill to ski more glades, and finally ended the day on the old Tuckerbrook trail, cut back in the 1930s and maintained, often clandestinely, in the decades since.

This is the one off-piste trail I remember from my own childhood. Skiing it is a rite of passage. Tuckerbrook is not a particularly hard trail, but it is an adventure. You have to hike to reach the entrance, it’s not groomed, and there’s a long traverse out at the bottom. You also need to line up a lift back to the base area, as the trail spits skiers onto a dead end back road a couple of miles from any ski lift.

Although a few others had been in there by the time we reached Tuckerbrook Wednesday, it was some of the best skiing we had all day. As grateful as I am for the manmade snow that allows some consistency to ski season, there is nothing like the real stuff – and that’s what you find on Tuckerbrook and in the glades.

So it was fun to continue the adventuring last weekend, both for my kids and their ski groups and for the young skiers I help to coach. My youngest daughter took another trip down Tuckerbrook. My oldest skied a different unmapped trail. Our group snuck through woods so tight branches smacked our legs and cheeks as we made our way to hidden glades, turning around trees and rocks, finding soft snow everywhere we went.

I don’t know about the kids, but I ended the weekend tired – and fulfilled. And grateful that, on a mountain with as many secret stashes as there are named trails, there are plenty more adventures to chase.

It is a rare occasion that I get to devote an entire day to watching my kids ski race. Based on my physical reaction to being Race Day Mom last weekend, that’s probably a good thing.

I’d taken the day off from coaching the littlest racers at Cannon to spend the day rooting for my son and his friends at the U12 State Finals at Cranmore. Most of the day, all was just peachy. The sun was out. The snow was soft. I chatted with other parents at the finish area, cheering as kids we knew came down the course and through the finish.

About two racers before my son’s bib number, though, my heart rate quickened. My shoulders tensed. I had to focus on taking even breaths. By the time I saw Owen push out of the start at the top of the hill, I felt like I was going to vomit. Or cry. Possibly both.

For the 49 seconds it took him to get through the course, I was a disaster. And then he pushed through the finish, and everything returned to normal.

This is how it is for me every time one of my children is in a race course and I am at the finish.

I can’t explain why the mere act of watching my children do something they love causes such acute angst. There is no logic behind it. I am not overly concerned with how well or poorly they will do compared to the field. Nor am I particularly worried about them being injured.

And this is not a new sport to me. I grew up ski racing. I’ve coached young racers and soon-to-be racers for several years. I’m familiar with race day nerves from a competitor’s perspective, but I was never the kid puking off the side of the trail before first run. Likewise, I never felt overly nervous for the kids I coach as I doled out pep talks at the start or high fives at the finish.

Although I’ve coached and watched my kids play other sports – soccer, baseball, basketball – those competitions don’t inspire anything like the anxiety I experience during ski races. The one exception there, perhaps, is the few times my kids have been involved in penalty kick shootouts during soccer games.

Maybe, then, it is that sense that my child is up there alone.

Perhaps at its core this nearly paralyzing, and thankfully only momentary, anxiety I feel on race days is simply motherly instinct. My son is facing a challenge on his own, and there’s nothing I can do to help him. My daughter, who wakes up full of nerves every race day, has to overcome her own anxiety to push off from the start and charge hard through a course, and there’s nothing I can do but stand idly by and watch.

There are no timeouts, no teammates to rely on mid-race, no direct opponent to deke around or win the ball from. During that short race run, it is just the racer and the course – and the potential for both heartbreak and triumph.

I know I’m am not the only frazzled parent standing at the finish line. I’ve watched friends stare at the course stone-faced as their children come through, or bouncing with nervous excitement, or muttering some encouraging phrase repeatedly for their child’s entire run. Normally reasonable people, we get a little wonky during races.

My kids are just at the start of their ski racing experience. Maybe the more races they’re in, the more times I stand at the bottom and watch, the easier it will get. For now, though, I remind myself to breathe, cheer as loudly as I can, and know that this feeling, too, shall pass – as soon as my kid crosses the finish.