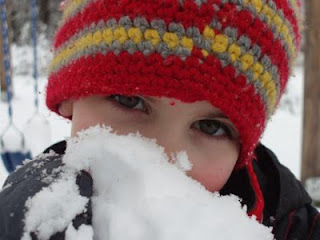 It was a snow globe kind of morning. We woke to a welcome cover of white across the front yard and big, lazy flakes floating softly to the ground. The season’s first snow.


We had a few flurries a couple of weeks ago, which turned the high mountain peaks a dazzling white against a bluebird sky and garnered enough excitement to start the kids begging to ski. But this was the first snow to stick in the yard and cover the grass, and it beckoned us from the warmth of inside to the exhilarating snowy landscape outside.

The kids donned snow pants and boots, mittens, and brightly colored winter hats and dashed into the transformed landscape just beyond the front door for the season’s first shoveling, snow angels, sledding, and snowballs. The dog bolted exuberantly outside to roll in the white, remembering the thrilling chill of snow in fur.

As I followed the kids and their laughter into the yard, I embraced the joy of first snow. The whisper of fat flakes on cheeks and eyelashes as you lay back to sweep snow angels into the cold ground. Footprints crisp against the fluff. Chickadees puffed up against the cold and looking right at home in the snowy branches. The soft thump and accompanying poof of white as a snowball hits its target.

Most of all, the first snow is the promise of wintery fun to come: of snowmen still to be created and fast runs on the sledding hill and (best of all) sweet powder days on skis.

It’s not really winter until it snows. And even if the first snow arrives a month (or more) before the solstice, once the white is on the ground, the warm colors of fall are forgotten, and it is winter in our hearts. The first snow is a joyous and quintessential rite of childhood winters and of the arrival of the best season to all lovers of winter, regardless of age. Welcome, winter. Hello, Jack Frost. Bring on the snow!

Helping those who help others


The ballroom at the Mount Washington Hotel filled last Friday evening with firefighters, police officers, emergency first responders, and residents of communities throughout the region, all dressed to the nines for the fifth annual awards dinner of the North Country Public Safety Foundation. 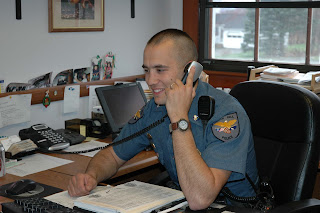 The dinner is a way to thank these professionals and volunteers – who are, essentially, always on duty – for their service to the community. Throughout the evening a slideshow played behind the stage, showing these folks at the work they do. One photo was of Jose Pequeno, former police chief of Sugar Hill. He is smiling in the photograph, sitting behind a desk, with photos of his family lining the wall. That photo accompanied a 2005 article I wrote about Jose, then Sugar Hill’s only police officer, just after he was called up by the National Guard for a tour of duty in Iraq.

Jose had earned a reputation as a good guy, quick to smile, always ready to offer a helping hand. The day I took that photograph he was both apprehensive and happy. He worried about leaving his wife and three young children (now teenagers) behind as he went halfway across the world to war. He was proud to be fulfilling his duty as a soldier. He was ready to serve and confident that he would return home safely.

There is no certainty in life, even less in war. In March of 2006, about a year after I took that photo, Jose was devastatingly injured in an explosion in Iraq. As news of his injuries reached home, there was an immediate effort to “Bring Jose Home,” and from that effort emerged the North Country Public Safety Foundation.

I was in the newsroom the day word came from Iraq of the explosion that killed National Guardsman Christopher Merchant of Vermont and injured Jose. Both men were 32 at the time, the same age as me. Eventually we learned that Jose’s injuries were severe and included a debilitating head injury from which he has never recovered.

A month after the explosion in Iraq, as Jose remained at Walter Reed Army Medical Center in Washington, D.C., friends and neighbors gathered for a fundraising dinner and auction at the Sugar Hill Meetinghouse to kick off the Bring Jose Home campaign. That night, the community raised over $22,000 for their police chief and his family.

The effort eventually garnered more than $120,000, enough to build the Pequeno family a wheelchair-accessible home in Lisbon. “This has been a project that has meant a lot to a lot of people,” Sugar Hill Fire Chief Allan Clark said the day the house was finished. “It was more than helping our police chief, but a statement of helping those who help others.”

For a series of complicated reasons, Jose did not come home to New Hampshire. He lives in Florida with other family and access to regular medical care. But the North Country Public Safety Foundation has grown from the initial Bring Jose Home effort, raising nearly $1 million in its six years, money that goes directly to helping those who help others in our communities.

Throughout the ceremony last week, speaker after speaker told of the cooperation and collaboration these professionals and volunteers share, from community to community, between departments, and across specific occupational lines. I was honored to share a table with a few of these folks, including Sugar Hill Police Chief Dave Wentworth and Assistant Fire Chief Doug Glover, who both worked with Jose, knew him far better than I did, and surely think of him often as they do their work.

I imagine I’m not the only person who wishes things had been different, that Jose and so many others did not have to go to war, that we could again see the smile he had that day in the photograph. We also hope that we will never need the services of firefighters or EMTs, law enforcement officers or search and rescue volunteers. But it is a comfort to know they are standing by, just in case.

This essay appears in the November 9, 2012 edition of the Record-Littleton.
Posted by Meghan McCarthy McPhaul at 5:58 AM No comments: