Too late, I remembered I was chewing gum. I’d already taken my seat in Ms. Spinney’s classroom when I realized the gum was there. I looked at her, she looked at me. She never said a word, but I knew I’d be served a detention slip the next morning. It didn’t matter that I was a good kid and a good student. The rules were the rules, and in Ms. Spinney’s class gum-chewing was not allowed.

This sophomore-year incident popped into my mind this week when I heard that Ms. Spinney had died. And from that one memory, my thoughts wandered to other teachers I remember from my years of schooling, long ago as they sometimes seem. I couldn’t tell you the name of every grade school or high school teacher or college professor I ever had – or every specific lesson I learned from them – but I remember many of them. Mostly the Good Ones.

I remember Mrs. Forsythe from first grade and that I was happy my second-grade teacher, Mrs. Petersen, moved on with me to teach my third-grade class, too. I remember being nervous to start at a new school in sixth grade, when my Hastings School class would merge with the Fales School kids.

I remember Mrs. Cowles teaching us The Preposition Song in English class that year. Three decades later, I can bust out all the prepositions – alphabetically and to the tune of Yankee Doodle Dandy – whenever I feel in danger of ending a sentence with a preposition. We also learned to diagram sentences with Mrs. Cowles – do kids even do that anymore? – and, when we really caught onto something, she’d tell us, “Now you’re cooking with gas!”

In high school, in a classroom with an impressive collection of wind-up toys, Mr. Sharpe lit the writing fire in me during creative writing class. In Mr. Kasierski’s biology class I learned to dissect once-living beings (ick), but also to look closely at the natural world, to notice the details there among still-alive things.

Mr. Mullen introduced us to classic American literature. I couldn’t tell you every book we were assigned to read that year, but I still have the journals we had to keep as part of our classwork. And I can picture Mr. Mullen acting out the scene in Tennessee Williams’ “A Streetcar Named Desire” when Stanley leans back, full of angst, and hollers, “Stellllaaaaaa!”

Ms. Spinney walked us through contemporary history. By the time our class arrived, she’d already been teaching for more than 30 years. History, of course, had shifted in those decades – although I imagine the challenges of engaging a group of teenagers in what they likely considered ancient history remained similar through the years.

I don’t remember, all these years later, which exact periods or topics we covered. I do remember Ms. Spinney using Billy Joel’s newly (in 1989) released song “We Didn’t Start the Fire” as a lesson. If you don’t remember the lyrics – or have never heard it – look it up. It offered a timeline outside of, but related to, our stagnant textbooks. I’ve always thought that was an ingenious bit of teaching.

Miss Spinney retired many years ago, but in the town where she grew up and lived her whole life, she remained involved in mentoring young people through some of the challenges of school and adolescence. She was one of the Good Ones – even if she did give me one of the two detentions I earned in four years of high school. (I never flubbed and chewed gum in her class again.)

I think teaching is probably harder work than anyone who has never been a teacher realizes. It’s a big responsibility to have a hand in shaping young minds. But what a tradeoff, to know that if you do it right – if you’re one of the Good Ones – a few of the lessons you’ve shared along the way might just come happily to some former student’s mind many years down the road, many miles from the classroom.

Playing with the boys - and the girls

This essay is not about girl power. Or boy power. Or equality or differences or politics, although it could be about any of those. Rather, it is about a shifting landscape in the sporting world, one that has evolved over decades and generations. One that was on full display last weekend during the final game of the World Cup. 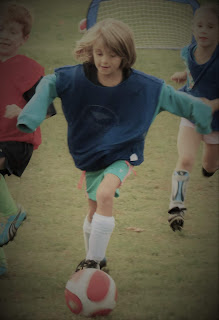 When my mother was in high school, she played basketball. Her uniform included a skirt, and only certain players were allowed to cross half court. Mom is pretty sporty and later became an adept skier and tennis player – and, in her retirement years, a golfer – but that skirted basketball team was her only option for any sort of organized sport during her growing-up years. Boys and girls did not play together.

I grew up during the Title IX era, when the doors of opportunity in sports had been thrown open to girls across the country. I played lots of different sports – sometimes with co-ed teams, sometimes with girls-only teams – and harbored Olympic dreams, like sports-playing kids everywhere. Those dreams, however, did not include playing soccer – my favorite – beyond school. Because there was no such thing as women’s soccer in the Olympics until 1996, the year I graduated college. The first Women’s World Cup was played in 1991. The U.S., led by legend Michelle Akers, won. But I didn’t watch, because the game wasn’t televised.

Last Sunday my children and I joined some 16 million television viewers across the country (and many millions more tuned in via live streaming) to watch the U.S. Women’s National Team win a record-breaking fourth World Cup title. Several million more fans watched around the world, not just this game, but every game of the four-week tournament. (Nearly 90 percent of all homes with televisions in the Netherlands – the U.S. opponent in the final – were tuned to the game.)

My kids will watch soccer whenever they come across a game on TV – women’s soccer, men’s soccer, college, professional, MLS, WNSL, Bundesliga – if there’s a soccer game on, they’ll find it.

They have played soccer since before they were in school, starting with kicking the ball around the yard, then moving into the organized rec program as kindergarteners. While larger towns and programs with more children sometimes separate boys and girls right from the start, my kids have played on co-ed teams most years.

As far as I can tell, the kids I have coached over the last seven years don’t treat me any differently than they would a male coach. This generation – at least the kids around here – is simply used to both boys and girls playing, and to both moms and dads stepping in to coach.

Now that my kids are middle school aged, their teams are often split by gender. But when my daughters occasionally helped out my son’s travel team this spring, nobody treated them any differently than they would treat male players. This weekend, my younger daughter will play in a tournament on a co-ed team.

I think the important thing is that they all get to play – the boys and the girls. I remember, as a soccer-loving kid, learning about Pele and Maradona, watching their moves, aspiring to be even a little bit like them. Eventually I learned about Michelle, then about Mia and Julie and Christine and the rest of the group that came to be known as “the ’99-ers” – the women who won another World Cup and inspired a whole generation to take to the soccer field.

Some members of that inspired next generation just won another World Cup. There were little girls – and little boys – watching all over the country, all over the world.

Now, girls don’t have to stay on their half of the court and wear a skirt to play sports (although skirts are fine). Now, girls everywhere can dream of playing soccer on a world stage. My daughters have dozens of soccer players who could be their idols. They study Tobin’s killer moves on the field, watch to see how Becky controls the back line, aspire to be like Alex and Megan and Rose – and Christen and Carli and Julie.

Then they go out to the yard or the field and play with whoever else is there – boys or girls, it doesn’t matter, as long as they get to play.