Traveling to new places, whether down the road or a long airplane ride away, is something I have always loved. Packing is another (not so loved) story. In my 20s I perfected the art of traveling light – a summer of backpacking in Europe, impromptu camping trips out west, and a 6-month stint in Ireland with only one (very large) suitcase. 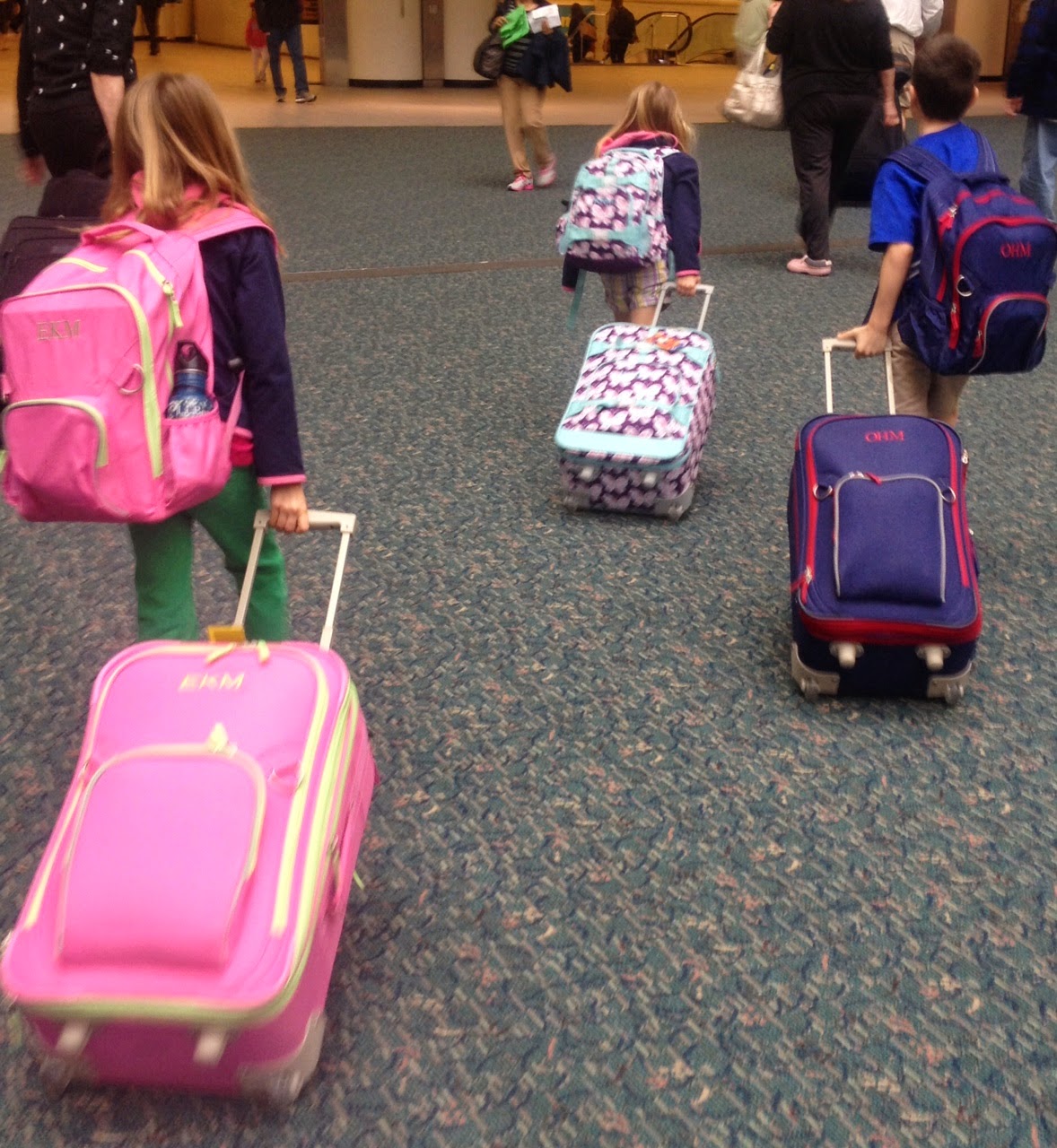 These days I don’t wander so far or so often, nor do I travel so lightly. My excursions now tend to include an entourage of three children and all of their – and my – stuff. I wonder what my minimalist 20-something self would think of all the bags we carry.

One summer, while I was in college, I spent three weeks living out of a backpack. That was a glorious three weeks during which I visited Paris, Nice, Rome, Florence, Salzburg, and Innsbruck. I went to art museums and cathedrals, tossed foreign coins into famous fountains, ate perfect croissants and creamy gelato, and climbed mountains in two different countries – all in the same four t-shirts, three pairs of shorts, and one wool sweater.

I thought I was pretty suave to be traveling so light. But throughout my backpacking journey, I met seriously light travelers: people – mostly Australians and New Zealanders – who had been backpacking around Europe and beyond for months, sometimes longer than a year, each with only one worn pack.

Just after turning 27 I packed my bags – one very large suitcase and a much smaller carry-on – and headed from the Colorado mountains to the west of Ireland for six months. The suitcase was temporarily lost somewhere between Denver International Airport and Shannon, Ireland, so I lived for four days with the clothes I had on and one partial extra set I’d thrown into the carry-on.

Contrast that to our first family vacation, which was a mere week at a lake in the wilds of Wayne, Maine. My youngest was a baby that summer, and the older two still in diapers. The back row of seats in the minivan was folded flat, and we filled that space to brimming with Tonka dump trucks, water toys, sleeping bags, floaty tubes for the lake. And enough diapers for three kids to last a week

We’ve since moved the summer vacation to Cape Cod. Luckily my parents go with us, because we need two vehicles to transport all that stuff: sand toys and books and favorite stuffed animals and a week’s worth of food staples and snacks. But no diapers, thank goodness. Last summer we also went to visit friends on the coast of Maine for a quick overnight, and I swear we packed nearly the same amount as we would have for a week away.

Last week we embarked on our first family expedition involving airplane travel – a whole new adventure in going places. Yes, this winter-loving family flew south for a week, lamenting leaving the all that great snow to other skiers, but relishing the chance to feel some summer-like warmth during an exceedingly cold winter.

In true mom fashion, I had the kids’ warm weather clothing pulled from winter storage and packed neatly into their new suitcases several days before our trip. My own bag, on the other hand, I grabbed the morning of departure and filled helter-skelter with wrinkled shorts and a couple of sundresses, flip-flops and bathing suits, and my youngest child’s purple stuffed unicorn, which took up a good quarter of my large bag and without which, she claims, she cannot sleep.

Maybe this change in my packing savvy has something to do with having children. Or with being out of practice. Or with there being too much space in the suitcase. Whatever the reason, I’m pretty sure the traveling, and the experiences we have along the way, are more important than the bags we carry.

Original content by Meghan McCarthy McPhaul, posted to her Blog: Writings From a Full Life. This essay also appears as Meghan's Close to Home column in the February 27, 2015 edition of the Littleton Record.

Posted by Meghan McCarthy McPhaul at 6:54 AM No comments:

I’ve brushed a new layer of fluff off the windshield just about every morning for the past two weeks. My husband has taken to dropping the plow nearly each trip into or out of the driveway, scraping away the snow that has fallen since the truck’s last passage. I’ve lost track of the number of days that have started off with temperatures well below zero and barely warmed.

It’s Winter, all right, and it looks like she’s settled in, which is just fine by me. 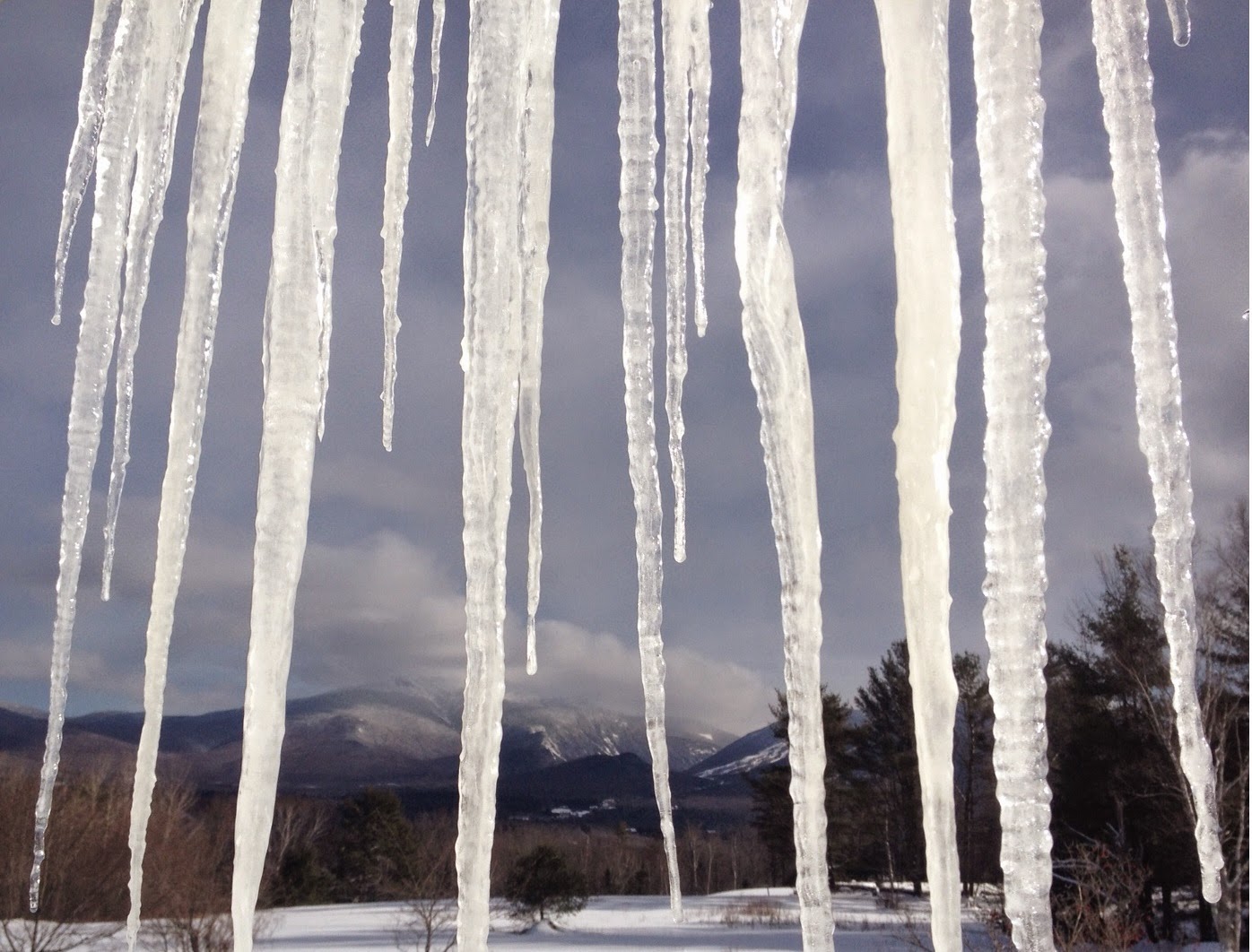 It takes a good dose of New England hardiness to survive a winter like this. At least to survive it with some sense of good cheer. There is shoveling and roof clearing and endless plowing and firewood carrying. If you’re lucky (and smart) there is also skiing and snowshoeing and ice skating and sledding and snow fort building. My kids (and I, too) lamented the December rain and the loss of white from our landscape. Cold and brown is no good for a winter-loving soul. Cold and snow is an entirely different, and much happier, thing.

It seems while we head into the white looking for fun, many animals – the hardiest of New Englanders – have hunkered down since the deep snowfall. A few weeks ago our fields were laced with deer tracks and the hopping marks of red squirrels and the canine paw prints of coyotes, along with fox and the elusive bobcat. Lately, however, when I strap on the cross-country skis for a mind-clearing trek through the field and woods, I see far fewer tracks. A solitary deer trail emerging from the trees here, a snowshoe hare track bounding across the path there. The garden compost heap, which had been visited regularly by a bold doe, has been left alone for days, except by the crows.

On the coldest days, even the ever-cheery chickadees wait until well after I’ve had my own breakfast to visit the feeder. A pair of blue jays often sit puffed against the chill on bare branches nearby, their brightness almost startling against a backdrop of white. The other day a barred owl perched atop a dead birch tree in the field, head turning methodically in search of a meal, feathers ruffled by the wind. Eventually the owl gave up and flew away; there were no small rodents moving through the deep snow below.

The only animal who seems unbothered by the cold and deepening snow is the porcupine, whose trough-like trail through the woods crosses the human-made path of snowshoes and skis just where it has the past few winters. Scraping teeth marks appear like brush strokes across several smallish yellow birch trees along the trail, revealing where the porcupines ate the inner bark, a favorite winter meal.

I know there are plenty of people who hunker down, too, closed up in their warm houses waiting for spring through the long northern winter. And there are others whose children have had far too many snow days (while here we’ve had zero snow days and still plenty of snow), wreaking havoc on the already complicated logistics of family schedules. In Boston and other cities, they are running out of places to put all the snow; commuting is an ongoing nightmare, and this winter is a multifaceted headache there.

Here, it is just winter, to be endured or enjoyed, depending on your perspective. Sure, plowing and shoveling become tiresome when they are daily chores, but all that pushed-up snow makes a great foundation for a snow fort. Frigid temperatures can certainly wear a person down after a while, but that cold makes the cocoa all the better. Driving through snow is not much fun, but skiing in it is pure, invigorating bliss.

In mid-February, the days are noticeably longer than a few weeks ago. To some, that means spring is coming. To the rest of us, it means more daylight for basking in Winter’s white glow.

Original content by Meghan McCarthy McPhaul, posted to her Blog: Writings From a Full Life. This essay also appears as Meghan's Close to Home column in the February 13, 2015 edition of the Littleton Record.

Posted by Meghan McCarthy McPhaul at 6:30 AM No comments: