Dance of the Seasons

A mid-October snow storm laid a thick layer of white across the Presidentials and left Lafayette rimmed in frost while I was away last weekend. What little snow fell in the yard was gone by the time I returned home Sunday afternoon, receding in sunshine barely warm enough to nudge the temps above freezing. 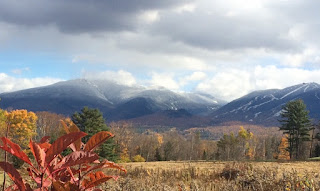 Sunday’s snowy painting of the peaks was the third time this fall they’ve turned white. It’s likely the snow there will fade again, at least for a while, before it settles in for the long months of winter. This is the dance between the seasons: Winter takes one step forward, then two steps back as Fall makes another pirouette. I find myself caught up in the dance, back in that familiar place between eager anticipation of Winter and a wistfulness for fading Fall.

I drove north Sunday along the back roads of Vermont and New Hampshire through a golden shower of wind-born birch and sugar maple leaves, which rose up from the road as I passed and swirled around the truck before falling again, tumbling along the pavement in the wake of my passage, then settling to await the next car and take flight once more.

Most of the leaves have fallen now, although there’s one big sugar maple between my desk and the mountains still clinging to its yellow foliage, and the oaks and beech trees will hold their russet leaves a little longer. Once the leaves have gone completely and left the trees irregular skeletons of trunk, branches, tapering twigs, I am ready for snow. There seems little point to me in cold, leafless days without snow, and am anxious for Fall to give in, finally and completely, to Winter.

Still, there are things left to do as the seasons twirl around each other. We accomplish the work of shifting seasons in fits and starts – clearing the garden of its withered remains, stacking firewood, pulling hats and mittens and warmer coats from the closet only when we finally need them – moving more frantically when the weather turns toward Winter, and unhurriedly on those still-warm, brighter days.

Last week, between the fall’s second whitening of the peaks and the weekend’s snow, I made a pre-winter outing to the top of Mount Lafayette. The last time I made that hike, I think, was during high school, and I’d been wanting to get back to the summit for several years. Thursday was too good a day, too late in the season, to pass it up.

The summit showed white as I drove toward the trailhead, and the temperature hovered right around freezing as I set out, but the upward trek soon warmed me. As I climbed above treeline, a stiff wind with mingled with the October sunshine, the chill of one cutting into the warmth of the other. The white I’d seen from below turned out to be only rime ice, clinging in stubborn, frosty feathers to the high alpine vegetation and boulders, but already melting from the sunny side.

From the summit, bundled up in winter gear, I could see pockets of fall color lingering in the valley. By the time I returned to the relative warmth of the valley floor and looked back toward the summit, the white had receded from the peaks of the Franconia Range. One step forward, two steps back. At least until Winter finds its beat and dances on past Fall.

There are a few carrots left in the garden, their still-green tops rising from the soil like a final beacon of the growing season. The frost last weekend left the rest of the vegetable garden a ruin of tired brown stalks, drooping vines, and wilted leaves. 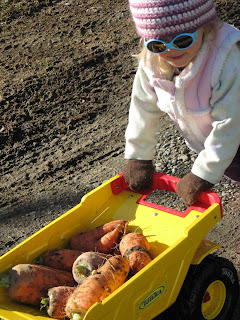 Our September was lovely and warm, sometimes downright hot. It was easy to believe, despite the shortening days, that we were still in the happy midst of summer. Even the trees seemed reluctant to begin their annual display of showy color. But the killing frost and the date on the calendar have forced me to accept the changed season, and this weekend I began the process of cleaning out the garden for its long winter’s rest.

Tucked away somewhere I have a photo of my older children helping me with the fall harvest. Only toddlers then, they already knew the joy of pulling carrots and digging potatoes, that thrilling suspense of each turn of the soil, waiting to find treasures revealed by the spade, reaching into dirt and hauling out food we could eat. The children loaded the garden bounty into their Tonka dump trucks and happily rolled it up to the house.

The kids still love digging potatoes and pulling carrots, plucking green beans and popping peas straight from the pods into their mouths, peeking through the garden foliage to find cukes and zukes and to check on the pumpkins’ growth. Weeding they don’t love so much, and who can blame them?

I feel a bit the same way about fall cleanup as I do about weeding: it’s a necessary process, but not my favorite.

The clearing-out of the garden happens in stages. Since early summer, we’ve gone through several plantings of lettuce, pulling out each row as it started to bolt and moving on to smaller, newer greens. We long ago consumed the first yield of shell peas and tugged the withered vines from the ground and from the fence they’d twined around and through and up during their green life. We dug the potatoes a row at a time, taking only the spuds we needed and leaving the others until two weeks ago, when we gathered all the remaining ones and carried them to the house – now in a 5-gallon bucket rather than yellow Tonka trucks.

Still, there were some veggies left before the frost – a row of beans, two sprawling zucchini plants, a few straggling cucumber vines – along with scattered old weeds that needed pulling before the soil could be tilled by hand and left to rest through colder days.

Putting the garden to bed, really and truly – yanking out the dead remains, pulling the last weeds, tucking the newly-cleaned dirt back into neat rows – is like starting the garden in reverse. The actions of pulling out rather than putting in are opposite, of course. But I am also in an opposite state of mind: in spring, relishing the promise held by freshly planted things and the strengthening warmth of the sun after months of cold; in fall, savoring the last of the home-grown goodness, soaking up the sun’s rays as they start to fade, and lamenting the loss of picking a bit of dinner from the garden.

There is joy and hope in the hard work of putting a garden in. The pulling it out is more of a melancholy chore. With frost threatening each evening of this week, we cut the few plump, green pumpkins from their withered vines and brought them to ripen (we hope) in the sheltered light of the front porch. I ripped out the drooping tomato stalks (along with their stakes), pulled up the cold-blackened basil, uprooted the newly dead squash plants.

The garden is mostly tucked in now, back to fairly tidy rows of bare dirt. In springtime those rows, surrounded by the burgeoning green of the fields beyond the garden, hold promises. Now, the garden furrows betray memories – of hot days in the sun and the taste of home grown goodness.

Only the carrots are left, and it is a sad day indeed when the last one is pulled from the dirt, brushed off, and eaten fresh: the growing season’s grand finale. For now, their fringed, green tops are a lingering sign of good things still to come amid a garden mostly put to bed, waiting for the promises we’ll plant next spring.