Despite the likely prospect of a summer devoid of beach trips, overnight hiking adventures, and the annual visits with cousins, my kids have never so eagerly anticipated the end of the school year. Sure, EVERY spring there is a sense of celebration and anticipation. No more pencils, no more (Chrome)books, and all that jazz. Hot days of sleeping in and endless freedom stretching to time’s horizon.

Before I go on, let me be clear that my children’s teachers have been fabulous through this whole remote school experiment. If I had to guess, I’d say the teachers like remote teaching as little as my children like remote learning. Nobody – at least nobody I know – wanted school to look like this for the last several weeks of the school year.

Normally, this month is chockful of end-of-the-year events – field trips and projects, concerts and celebrations. Normally, when I look at the calendar in May, I have to deep breathe my way through an anxiety attack – so many places to be in so short a time. This year, though, I am glad I wrote everything on our family calendar in pencil, because most of it has been erased.


The last day of school, formerly scheduled for the middle of June, has been moved up two and a half weeks to May 29. To add that new date to the calendar, I had to erase the previously scheduled event of that day: the annual 5th and 6th grade field trip to Boston. This is one of the most highly and happily anticipated days of the year for kids in those classes, including my own 5th grader. It’s a day in the nearest big city, with lessons in history and science (and how to cross several lanes of traffic safely), topped off by dinner at Quincy Market.

This year it’s one of many spring traditions my kids – and all the others – have had to give up and get over. I can hardly fathom how disappointed this year’s 6th graders are to be missing out on so many of the rite-of-passage events they’ve anticipated since they were wee kindergarteners. And I feel an extra big pang of disappointment for this year’s seniors, who, of course, are missing out on a whole lot of pomp and circumstance – and facing, like all of us, plenty of uncertainty in whatever comes next.

In our home, rather than giddy excitement over a summer of plans – quality cousin time, a week at the Cape, camping and hiking and paddling with friends, soccer camp and dips in the pool – there’s instead a reserved relief at nearing completion of a necessary task. So long, remote learning. Here’s hoping that after whatever this summer holds, fall’s return to school is up close and in person.

Last week was my kids’ April vacation from school. We don’t normally go far during this week when the weather here can feel like spring or winter – or both in a matter of hours. Maybe a short visit to Acadia, or a couple of days in Boston. Still, the idea of not being able to go ANYwhere this year weighed heavily on all of us. 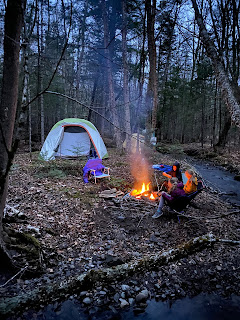 Without the normal weekend travel to late season skiing and early season soccer this spring, without practices and playdates, without even the daily journey to and from school and the office, we’ve become used to being home. Lucky for us, home is in a really beautiful place with plenty of space for spreading out. Most of the time, we’re OK being here. But school vacation – even when school is being done from home – is supposed to offer a time to get away, even if briefly and not very far.

So, we got creative. A couple of weeks before the break, I suggested camping in the woods between our house and my in-laws’. I didn’t have a plan beyond that vague idea, and I figured one of my children, maybe two, would be excited about this to varying degrees. But all three immediately jumped on board and went into planning mode.

It was a gift to have something to think about beyond school assignments and chores, beyond missing friends and sports, beyond the news that permeates so much now and can be simultaneously frightening and utterly confusing.

A week before vacation started, we took a whole-family walk into the woods. My husband, who grew up exploring this terrain, led the kids to a spot tucked into the trees, where Bowen Brook curves around a level area perfect for pitching a tent (or two). The kids declared this the spot and set to work building a fire pit of river rocks in the sandy ground next to the brook, with just enough space for our family to sit around it.

All that week before vacation, the kids discussed what to bring with us, who would sleep in which tent, and what we would eat for dinner (hotdogs cooked on sticks over the fire, of course). We kept an eye on the long-range forecast to see which days would likely be the best for camping. What I had hoped would be a mild change of scenery for a couple of days became a happy distraction stretched over the course of a couple of weeks.

On the chosen afternoon, we headed into the woods after lunch to set up camp. The girls worked together to pitch my old backpacking tent. My son and I put up the big family tent. Sleeping pads were unfurled, sleeping bags laid out, a few extra comforts from home tossed in. We schlepped in firewood and camp chairs, along with extra layers to allay the nighttime chill. As I got the fire going, the kids set off together – first downstream, then up – to explore.

All their lives, my children have been in these woods – first carried or pulled across the snow on sleds, then toddling in rain boots and stopping to inspect every leaf and bug, now walking with the dog or riding bikes. This is not unfamiliar territory. Somehow, though, making these woods into our overnight home – rather than simply passing through – made if feel, if not unfamiliar, in some way new.

The kids played in the water, moving rocks to build canals, happily discovering salamanders in that space where water and land merge. They gathered sticks for kindling and cut beech branches for cooking hotdogs and marshmallows. They jumped across the water, climbed up and over downed trees, played and laughed together.

I have two teenagers and one not far behind. We’ve been in the same house, nearly constantly together, for seven weeks. Most of the time we are all OK, but it is certainly not always easy. I abscond to my office and work for chunks of time, all the while wondering if they are doing their schoolwork or playing a game on a screen. Visits with grandparents, all thankfully within a mile of us, include social distancing rather than the normal hugs and snacks and playing games. None of us has hung out with friends in nearly two months.

Like most everyone these days, we are all a bit more, well, sensitive than usual. Buttons are pushed, tempers flare, feelings are often easily hurt.

But for two nights in the woods, there were no squabbles. Nobody sulked up to their rooms to be alone or picked a fight out of boredom. We hung out by the fire. We ate s’mores. We played cards. We talked. And then we crawled into our tents, with a gazillion stars overhead and a burbling brook for a lullaby.

For those two nights, it felt OK to be set apart from the rest of the world, from even the rest of our small community. We were at home in the woods, in a place at once familiar and fascinating. We were mere minutes from our backyard, but it felt like the perfect getaway.