While friends absconded this week to the warmth of Florida beaches and the Utah desert – and many places in between – my tribe marked April vacation with a trip to our closest National Park. 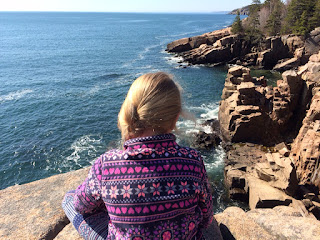 In some ways – mainly the yearning to get out of town for a few days and explore someplace new – this trip reminded me of my Colorado ski town days. When the ski area there closed in April, and as the long winter lingered in deep snow and persistently chilly weather, it seemed like half the town hit the road for someplace else – to ride bikes in Moab or camp in the desert or surf in Mexico – depending on time and budget allowances.

My springtime escapes in those days generally consisted of a Subaru loaded with tent, sleeping bag, camp stove, and hiking boots – and a friend or two for company. Over the course of a few years, I visited the Grand Canyon, Mesa Verde, Canyonlands – all national parks within road-tripping distance – and many other wide open spaces.

This week’s excursion was notably different than those taken in my younger, single days. Into the minivan went three kids and their accoutrements: books, games, stuffed animals, and lots of snacks. But as we set off for Acadia National Park, the impetus was the same: new adventures, a change in scenery, and exploration of unfamiliar places.

Both by the simple geographic location of home and by upbringing, my children are mountain kids. But they love the ocean and being by the shore. So do I.

There is magic and mystery in the movement of tides, and in the vastness of the ocean and its wildness. During one of many forays from our Bar Harbor hotel to the Shore Path that meanders through town, I wondered if kids who live by the sea are as enthralled by it as mine are, if they look for sea glass and shells, if they relish the sound of waves lapping the beach on calm days or crashing against the rocks on stormy ones.

My guess is they take it for granted, as my children do the mountains we see from home. Often, wonder comes from the unfamiliar essence of a thing, the novelty of the unknown.

Mount Dessert Island was happily quiet so far in advance of the rollicking summer season. We passed few people on the Shore Path and had Acadia’s Loop Road practically to ourselves during our ventures into the park.

We spent one full morning wandering the Ocean Trail in Acadia, where the kids peered into tidal pools and joyfully scrambled up and over the myriad rock formations jutting in odd, multicolored angles from the sea. We drove along the edges of Mount Desert Island, taking in picture book-classic New England villages and seashore scenes along the way.

We made early morning and late afternoon visits to the Shore Path and the craggy places along it. While the kids bent to look for perfect shells and tiny pieces of colorful sea glass in the small patches of rocky sand, I sat on the rocks and watched eider ducks bobbing easily on the waves just beyond the shore, listened to bell buoys chiming in the harbor, and watched boats laden with lobster traps motor past the Porcupine Islands.

These are standard sights and sounds for coastal dwellers, but wonderfully different – and, therefore, enchanting – to us mountain folks.

We were all sad to leave after a few days and hope to return someday in the not-too-distant future. But there are other places we want to explore, too. If my kids are anything like me, they’ll have a perpetual case of wanderlust and a never-ending wish list of places to visit.

I hope we spend many April vacations – and other times, too – engaged in new adventures, changing scenery, and explorations of unfamiliar places.

A Reluctant Farewell to Winter

A wise skiing friend once told me, “You know, come summer, you’re going to wish you were skiing.”

That’s a hard thing to explain to someone who isn’t hooked on this sport. I love summer. The warmth and color, the bike rides and hikes, the long days of light, the sandy beaches, the crisp vegetables picked fresh from the backyard garden. But sometimes, even on those long, hot, lovely days, I dream of skiing. Of gliding in perfect, arcing turns through snow. It is, perhaps, the closest thing to flying I’ll ever feel. Freedom. Power. Grace.

Normally by this point, mid-way through April, I am good and ready to say so long to winter. This year, though, I am having a hard time letting winter – at least the skiing part of winter – go.

It feels like a reluctant farewell to a loved one, where you ache for one more hug before the last good-bye. No matter how many runs I take, I want just one more perfect one, because I don’t know when the next one will come.

This winter was one of ups and downs – early snow, mid-season rain and ice, deep February powder days followed by another thaw, and another brief deep freeze in March. These April days are like a bonus to a ski season that fluctuated throughout, from one extreme to the next and back again.

The first Sunday of April, on our first weekend day off from coaching (me) and race training (kids), we went out for a few family runs and ended up skiing until after the lifts stopped running, exploring glades we’d never skied and spending a near-perfect afternoon with friends.

Our last run was on an old trail through the woods, cut some 80 years ago by a Civilian Conservation Corps crew. This trail branches off from the main ski area after a short hike, then winds its way down through an old forest, past rocky outcroppings, to the end of a dirt road a few miles from the base of the ski area.

(Read my essay on the first time I took the kids down this trail on powder.com.)

The day ranks among my most favorite ski days ever. Maybe, I thought, it would be our last of the season. But, greedily, I hoped for more.

Last Sunday dawned sunny and warm again, after a snow-squalling Saturday, and we went out for a few more runs. Soft, sloughy, sunny runs. More exploration of new places. More turns down old favorites. I could have stayed all day.

Alas, springtime chores called us home, where the kids swiftly traded long johns and ski boots for shorts and sneakers and ditched their skis for bikes and soccer balls.

My children seem unaffected by the late-season ski fever that has enveloped me these April days. They are mostly indifferent about the prospect of more skiing so late in the season. They are happy for the warmth, for the first signs of greening grass, for the freedom of running outside unencumbered by extra layers.

In many ways, I’m happy for spring’s arrival, too. I love that there’s light in the sky when I wake early in the mornings, and that it lingers past dinner time. It was nice, during the warm spell early this week, to open the windows to that new-spring scent of fresh air floating indoors. I gladly notice new birdsong nearly every day as the warm-weather, feathered residents return gradually, following the snowmelt. The blooming of the first crocuses thrilled me as it has every spring since I was a little girl.

Still, I’m reluctant to bid a firm adieu to winter. And so I snuck away from the desk Monday morning for a few more spring skiing runs. The combination of warm sun on my face and soft snow beneath my skis was blissful. I wanted it to last, just a little longer.

Maybe we’ll get in one more day of skiing this weekend. If we do, I imagine it will be just enough to keep me longing for more – fodder for those summer days to come, when dreams of skiing sneak in past the warmth and color, and I am floating through cool white again.