Summer is my favorite season. I say that about every season in its prime, so don’t mind me in a few months, when the leaves are ablaze in the colors of autumn and the air is perfectly crisp and I claim fall is my favorite, or when winter arrives all white and frosty and magical and I announce it is my preferred season, then months later embrace the reawakening of spring as the best. Right now, my love affair is with summer. 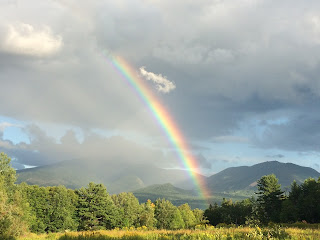 At some point, several years into adulthood, it struck me that although I no longer had that last-day-of school excitement, with summer’s carefree days stretching infinitely into the hazy heat of the season, I still thrilled at the arrival of summer. So ingrained was that feeling of summer freedom that I felt it as the days lengthened and warmed as clearly as I had as a kid, even though my schedule of work and responsibility was the same now in July as it was in November or March.

Maybe that lingering sense of summer freedom is because I have always lived in places where summer – with its warmth and color and long days – is fleeting. Or maybe it’s that I have so many good memories of the season from my childhood – hiking with my family, lazy afternoons of reading in the backyard hammock, time in the garden with my mother, catching fireflies just after dusk, sparklers on the 4th of July by the backyard campfire, countless hours spent kicking a soccer ball, and one epic cross-country journey with my parents and brothers and a pop-up camper.

Whatever the reason, now that I have kids who fully embrace the joys of summer – kids old enough to put on their own sunscreen and carry their own backpacks, but still a few years away from summer jobs and the dreaded teenage years of being too hip to hang with Mom – summer has regained that sense of freedom and insouciance.

Here are some of the things I love about summer:

·         Reading by the big window in our living room – or on the front porch – after the kids are tucked in, as twilight slowly engulfs the mountains, passing through an impossible array of subtle hues on its way to full dark.

·         The sparkle of a thousand fireflies twinkling across the field, as close to magic as anything I’ve seen.

·         Watching my children fall into books and get lost there for chunks of time – bed time, after breakfast time, by the pool or river time.

·         Clean sheets dried on the clothesline and smelling of sunshine.

·         Flowers picked from the field and the garden and placed in a simple glass jar on the dining room table.

·         Birdsong, even the annoyingly redundant call of the catbird at dawn.

·         Vegetables gathered from the garden: the succulent result of the tilling and planting and weeding and watering.

·         Outings with friends and our combined gaggle of children.

·         (Mostly) unrushed mornings – and not having to pack lunches every single day.

·         Thunder echoing through the mountains and the cooling rain which often follows.

·         The games my children imagine together, whether they are pretending to be wild animals (sometimes not much of a stretch) or building a fort in the woods by the river.

·         Running in the quiet and relative coolness of early morning.

·         Fresh, wild berries, found unexpectedly and consumed on the spot – or gathered purposefully and tucked into the freezer for less bountiful days to come.

·         Standing atop a tall mountain with my children, who are still discovering how much they can do, how far they can climb – and who still want me along for the adventure.

There are hitches in all this summer freedom, of course. Often the garden goes unweeded, becoming jungle-like while we are off hiking and splashing in the river. All those house projects I swore I’d tackle this season get pushed, once again, to next season’s to-do list. And my work hours are severely diminished in these weeks when the kids are with me nearly all the time.

When I ask my children, though, what they love most about summer, all three place “spending more time with my family” at the top of the list. Perhaps this will not always be their favorite part of summer; certainly they will outgrow this self-sufficient-yet-still-ingenuous phase, as they have outgrown other childhood phases.

So I am taking advantage of these days when they want to do things, go places, explore and adventure together. Someday, I hope, when they have moved beyond the enchanting freedom of their childhood summers, they will still thrill at the season’s arrival, still embrace the simple joys of summer, still remember all the sweet summer fun we had together.

Tucked among a collection of family photos in our living room is a picture of my friend Liz and me when we were little girls. We’re standing outside our hometown library on a rainy summer day, knobby knees sticking out from shorts, raincoats buttoned up against the weather. She’s holding an umbrella under which we’re cozied up, peering at the pages of an open book. 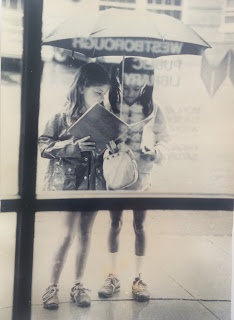 Liz lived close to the center of our town, and we rode our bikes all over together – to the store that sold penny candy, to meet up with other friends, and, as the photo evidence shows, to the Westborough Public Library. I still remember this library of my childhood hometown. There were bright, wide steps just within the side entrance – modern stairs of linoleum leading down to the children’s section, others up to the main floor, which back then was a couple decades shy of its centennial.

When I picture the inside of that library, the memory includes that comforting, musty aroma of old books and polished wood common to libraries everywhere. A sense of calm, intermingled with expansive curiosity, settled over me each time I arrived at this place full of books. It’s a sensation I still get when I pass through the heavy doors of a library and breath in that bookish scent: what stories will I discover today, what exotic places, what new information?

Thank goodness (and good teachers) my children love books as much as I do. Their yen for new reading material is well satiated by the school library from September through May. But come summer, the kids ask often to go to our town’s Abbie Greenleaf Library. There, they know, they will find shelf upon shelf of books: stories about cats and horses, volumes on tropical rainforests and science experiments, tales of wizards and orphans and epic adventures.

Last year the kids got their own library cards, carefully signing their names, then tucking the small laminated rectangles into their wallets. They took to carrying these wallets – my son’s a black, faux leather zip case, my daughter’s a pink canvas tri-fold bedecked in white hearts – with them whenever we went out, just in case we swung by the library.

We made several trips to Abbie Greenleaf last year and have been a few times already this summer, the kids perusing the shelves of the children’s section for just the right book. They have learned to look up titles in the library’s online catalog – or, even better, to ask the librarians’ advice on the next good read. Often they are lost in the just-checked-out pages before we have pulled out of the parking lot. 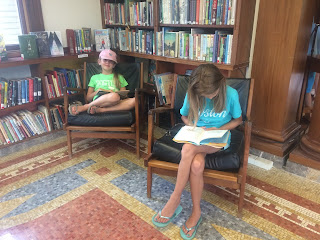 Now that all three of my children willingly read on their own, they are content to sit for a while in the kid-sized chairs and couches of the children’s section while I wander to the farther reaches of the library, searching the long, high shelves for my next reading adventure, running fingers along spines to find a book that feels right, seeking an interesting title or a favorite author, peeking at first sentences in search of one that seizes me by the imagination and sucks me in.

Libraries are more than just books, of course. They are centers of community and learning and research. I have spent many hours in the Littleton Library spinning through the microfiche files of old newspapers, while other patrons read today’s news in the next room. This week I attended a poetry reading at the Abbie Greenleaf Library, a small-town welcome to Rose McLarney, this year’s Poet in Residence at The Frost Place just down the road.

I wonder if Robert Frost visited the library when he lived in Franconia a century ago, if he brought his children here when the building was still new. The collection would have been quite different then, of course. Probably there was no children’s section, and perhaps the rooms did not yet carry the aroma of well-worn pages. Still, it’s nice to think of the poet meandering along the shelves, running his fingers along the rows of books, while his children nestled into a quiet corner to read on a rainy summer day.