Around this time each year, I start to get excited for spring. I know better: one 60-degree day does not a season make. And I love winter – I do! But it’s hard to not look forward to green grass and pretty crocus blooms when the sun is out – and the driveway is a mess of sinking mud and melting ice. 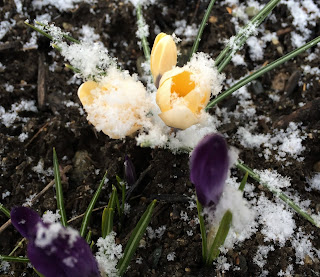 At each seasonal junction, I am thankful to live in a place with four seasons. (I know some people count mud season separately, but there is no slush solstice or mud season equinox.) How fleeting would spring’s fragile blooms seem without the knowledge that sturdier summer blossoms were on the horizon? How could we love the heat of summer so without the promise of crisp fall days to come? How bare would the late autumn trees seem without being able to look forward to winter’s snow-laced mantle?

Now, at this pivotal time, I am cherishing each day on the snow I can get, hoping (futilely, probably) for another few ski-through-the-woods outings with the dog, maybe even one more powder day. But I am also relishing the sun on my face, the warm afternoons when I can open the windows and let fresh air filter in, the mornings when I am comfortable leaving the house in a lightweight vest instead of my long down coat.

It’s around now that I start talking with the kids and with friends about warm-weather adventures: hiking and camping, running the backroads, paddling kayaks along the water. Often, these conversations happen as we drive toward the ski area or ride the chairlift. That seems less like irony to me than faith in the world continuing to spin from one season to the next.

You see, I’m not wishing days away, lamenting the cold and snow as I long for the next season. After as many trips around the sun as I’ve had – all of them in places with distinct, if sometimes slow-to-arrive seasons – I’ve learned (usually, at least) to accept whatever the weather presents and try to dress accordingly.

New England weather is, after all, notoriously mercurial – and getting more so, it seems, all the time. So while the calendar says the new season arrived this week, I know that winter, or at least wintery weather, can – and likely will – return before spring really settles in. I’ve seen snowstorms in May, including one Memorial Day weekend when the kids were able to make a snowman in the front yard – then came inside to eat ice cream cones in front of the fire.

And that’s OK. Part of living here is rolling with that wacky weather. I’m more likely to be upset about a 50-degree day in January than I will be by a 40-degree morning in June.

I know that for the next several weeks, the ski boots will share space with the soccer cleats and the flipflops. The laundry pile will comprise shorts and t-shirts along with long underwear and wool socks. By the time I feel comfortable packing away the down coat, I often just leave it hanging in the closet by the front door, knowing I’ll need it again soon enough.

On these warm new-spring days, when the sun seems to sink more slowly than it has for ages, we – all of us: kids, dogs, grownups – stay outside a bit longer, lingering even in the sinking mud and slushy snowmelt, peeking into the flower bed to see if the crocus leaves are popping up yet. We are not so much eager to push winter behind as we are ready to welcome what comes next – knowing it will all cycle around again. And thankful for it.

My parents came to every home game my college soccer team played, and many of the away games, too. This might seem unremarkable – until you realize I went to college a 6-hour drive away from home. And that I mostly sat on the bench, making brief appearances in a handful of games through three years.

Being at the games was about more than simply rooting for me. They became part of a group of parents cheering for their daughters, a collective cadre of supporters who watched through crisp sunshine, cool rain, and even autumn snow, who hugged us after many wins and occasional losses, then took us out to dinner.

Now that my own kids are out there, competing on the soccer field and the race course, I’ve found they also have their fan club – and that I’m just a small part of it. This was clear at October’s Halloween Cup, when grandparents, aunts and uncles, and family friends stood along the soccer field sidelines for hours to cheer for the kids.

It was again apparent last weekend, when my son raced at our home hill of Cannon Mountain in a two-day event to try for a spot at this weekend’s state Championships for his age group.

Ski racing can seem an intricately complicated sport, even at the junior level. To simplify, there are a series of races through the season whose cumulative results qualify a pre-determined number of kids to Champs. If you don’t make the cut, you get one more chance – at Finals – to qualify.

Finals were last weekend. My son needed to finish in the top 5 out of a pool of close to 100 racers from around the state to get to Champs. His twin sister and a bunch of his ski racing buddies had already qualified. He really wanted to go to Champs as a competitor, not an onlooker.

Being a spectator at a ski race is really an act of love. It entails several hours in usually cold weather, sometimes with precipitation falling, and often including a hike up (and then back down) an icy slope to gain a decent vantage point. All to watch the kid you came to see ski by in a matter of seconds.

Because I coach the youngest ski racers on weekend mornings, I often have to follow along on Live Timing, which means logging onto a website to check racers’ times as the competition progresses.

As I was coaching Saturday morning, my phone buzzed incessantly in the pocket of my ski bibs. At our mid-morning break, I pulled it out to get an update. Even if Live Timing hadn’t been an option, I would have known my son’s first run went well. Friends who were at the race – on the other side of Cannon Mountain from where I was coaching – had texted to tell me he looked great and skied fast. Other friends following from afar on Live Timing sent congratulatory “Woo-hoo!” messages. They kept coming through the day and into the evening.

Sunday afternoon I ditched my ski boots and hiked up along the edge of the long giant slalom course to watch the action. (If you read this column regularly, you may remember that last year I wrote about what a disaster I am when my kids are racing. I’m much better mid-course than at the finish. If you missed it, here's Race Mom Jitters.)

The higher I went, the more spectators I found. I ended up standing with my husband and younger daughter, my dad (Mom was lower down), and my brother. Our posse of Owen fans joined a group from Cranmore, there to cheer on their own kids. But they didn’t just cheer for the kids they knew, the ones from their own race program. They yelled for every kid who went by. If they could learn a racer’s name from some other spectators cheering nearby, they yelled that name. They asked what number my son was, then cheered as enthusiastically for him as they did for their own kids.

And so the fan club grew that day, if only for a few minutes.

My boy came through with two days of great results to notch that coveted trip to Champs this weekend. The reasons I am proud of him are fodder for some other story, one I’ll write in a more private way.

While the success of the weekend may seem the most important thing – and certainly had my kid walking on air – I noted something more valuable than results this weekend.

What I’m most thankful for is the fan club my children have, the people who will show up to watch – whether on the sidelines, at the edge of the race hill, or as part of the audience in the auditorium. They offer support in person or from afar. They are there to boost the kids up on the tough days and to celebrate with them on the good days.

They’re the best fans any kid could have.