August is the month of garden abundance. In the case of my garden this year, the abundance is mostly in weeds. While many of the vegetable seeds I planted in the hopeful days of spring have been a flop, however, others have grown into prolific production. 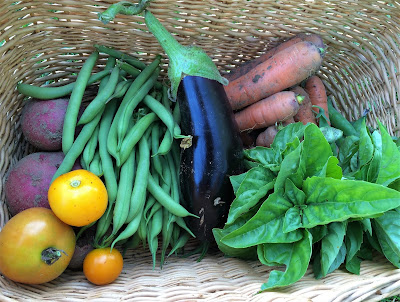 In the time-honored tradition of vegetable gardeners, I’ve been passing along the overabundance to friends and neighbors when I can – and gladly accepting other gardeners’ excesses. It’s all part of the gardening cycle.

Each spring, I till the soil in my garden, add a bit of compost from the heap at the edge of the garden fence, throw in some manure, and create somewhat straight rows where I drop seeds with the optimism inspired by warm spring days. Then I wait, and weed, and watch for tiny sprouts to pop through the soil and reach for the sun.

My gardening endeavors fall somewhere between necessity and hobby. Yes, I can simply run down to the grocery story to buy whatever doesn’t grow well – although store-bought veggies never taste as good as the ones picked from the backyard – and I don’t tend a garden big enough to keep us fed on pickled beets and frozen beans throughout the long winter.

Still, this labor of love – and sweat and dirty fingernails and hope – occupies enough time and effort that I expect to have a few weeks at least where most of our veggies come from the garden, and longer on either end of that time when we can pick a few greens or some herbs or the odd carrot or two to add to the table.

Every year, the garden yields differently.

This year, the peas – so abundant the last two summers – fizzled in July’s stubborn, scorching heat. My beans, always a success, yielded only one incomplete row of sprouts, which soon dwindled to two producing plants – enough for a handful of beans here and there, but certainly not the bumper crop of past years that filled the freezer.

My carrots have been slow to grow. The beets are scrawny. The jury is still out on the Brussels sprouts.

My cucumber vines, though, have produced copiously. Each day for the last two or three weeks I have found three or four spiky cukes hidden beneath the sprawling leaves. If I miss a day or two of picking, I end up with a dozen cucumbers.

Luckily, this is a vegetable my kids love (although I expect at this rate, they’ll tire of cucumbers soon). I’ve passed along the extras when I can, and I’ve been – happily – on the receiving end of others’ gardening glut.

Our vacationing neighbors invited us to pilfer their tomato plants while they’re away. My mother has kept us in green beans. I sent a bag of cucumbers into the office with my husband and received fresh-picked ears of sweet corn in return. I shared a pile of cukes and a couple of summer squash with a friend whose garden had been devoured by deer, and she handed me a carton of eggs from her chickens.

Beyond the cucumbers – and among the weeds – there are a few other garden successes. Although I missed National Sneak Some Zucchini Onto Your Neighbor’s Porch Day (August 8), it’s just as well, since the squash hill has yielded just the right number of zucchini – a near impossible feat.

The sungold tomatoes have ripened in perfect handfuls. I’ve had good luck, for the first time ever, growing onions. The eggplants are suddenly bursting with lovely, sleek, deep purple fruit. The basil, which I thought had wilted beyond recovery in July, has bounced back full and green, and we had our first garden pesto of the season last week.

All that fresh-picked color piled onto the kitchen counter makes the gardening effort feel worthwhile. And it ensures I’ll return to the backyard plot to till the soil again next year, to continue the gardening cycle – flops and abundances, weeds and all.

As the clock ticked toward the final minute of play, I worried we were in for the disappointment of a loss. My daughter had been asking for ages for the chance to watch her favorite soccer player – Alex Morgan – in a live game. Now here we were, in a sea of #13 jerseys, and the U.S. Women’s National Team was down 1-0 and almost out of time.


We waited anxiously amid the crowd of 21,000+, hoping for some last-second magic, yelling out to the players on the field just in front of us, hoping our cheers would inspire a goal.

Three years ago, when the once-every-four-years Women’s World Cup was being contested in Canada, my husband and I considered making the drive to Montreal to watch the U.S. – the eventual winners of the coveted Cup – play. I’ve been kicking myself ever since that we didn’t load our then 6- and 8-year-olds into the minivan and head north for that. So, when I saw the U.S. Women’s National Team would be playing in Connecticut, I bit the bullet, bought the tickets, and headed south.

My kids have watched a lot of soccer games with me in the living room. They’ve seen me sitting literally on the edge of my seat, watched me jump out of said seat in excitement, and heard both mutters of discontent and loud shouts of triumphant joy. Like pre-teens everywhere, the kids have become adept at rolling their eyes at their mother’s weird antics. But now they get into the games just as much – and often as vocally – as I do.

Nothing compares, though, to being there live to watch the action – with several thousand soccer-crazed strangers.

First, there was a meandering drive through a labyrinth of parking lots until we were finally directed into a spot, followed by the long walk to the stadium, where everything – from a hot dog to a taco to a bottle of water – seemed to sell for the bargain price of $5.

Eventually, we got to the good stuff. The official walk-in by the starting 11. A live performance of the National Anthem. Pre-game fireworks on the field. The team huddling up before kick-off – just like the kids do before their games.

Naturally reserved, my kids weren’t quite sure about joining in the “U-S-A!” chant that erupted at various points throughout the game, but they eventually did. We rose up for the wave as it undulated through the stadium. And, of course, we watched soccer. We groaned when Australia scored mid-way through the first half and rode the rollercoaster of great plays, hard charges, and near misses.

Second half was the best, as the U.S. team controlled much of the play and attacked the goal at our end of the field. Alex Morgan was yards away. Megan Rapinoe took several corner kicks so close to our seats, she surely heard us cheering for her. Rose Lavelle, Crystal Dunn, and Tobin Heath dazzled us with their killer footwork. Carli Lloyd came on near the end of the game to a huge ovation.

It all feels different when it’s happening right there in front of you, life-sized, without a commentator dissecting every move and the distraction of instant replay. I could tell by the kids faces, they were soaking it all up.

As the minutes ticked up to 90, though, it seemed a lesson in disappointment was headed our way. And then, in the final minute of the game, on the last Rapinoe corner kick, Lindsey Horan timed her run and her leap just right and headed the ball past the Aussie goalkeeper.

The crowd roared and leapt to its feet – we along with it – in an eruption of triumphant emotion not easily replicated in a living room. In that moment, the lesson shifted from one of disappointment to one of keep-trying-to-the-very-end. A tie, stolen from what had seemed like a sure loss, felt like victory.

It was a little bit of soccer magic, more real because we were right there to see it – and feel it – happen.

Original content by Meghan McCarthy McPhaul, posted to her blog, Writings From a Full Life. This essay also appears as Meghan's Close to Home column in the August 10, 2018 issue of the Littleton Record.

Posted by Meghan McCarthy McPhaul at 5:30 AM No comments: