I have always loved chickadees. In this, of course, I am hardly alone. These birds, with their endearing black caps, diminutive size, and cheery calls, appeal to many people. I love them in all seasons. But in winter, when so many of our spring and summer birds have flitted off for warmer climes, I appreciate the chickadees’ presence even more. 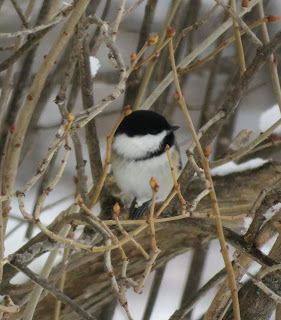 For as many winters as we have lived in this house, I have placed a bird feeder outside the big living room window. It’s hung from an iron shepherd’s hook post (hard for raiding red squirrels to climb) and placed roughly equidistant between two sprawling old lilac bushes, which provide ample landing spots for the chickadees.

Most of the daylight hours, a flock of these birds flits to and fro, from bush to feeder to tangled rugosa hedge and back, over and over. I’ve often watch them peck at the bark of the lilacs, or the nearby maple tree, or the mock orange against the house, where they cache seeds, saving some food for those days I am slow to refill the feeder – or, I suppose, in case there comes a time when the resident humans become an unreliable source of food.

Recently, I learned that chickadees develop additional brain cells during winter, which boost the birds’ memories, so they can recall where they’ve left those seed caches and retrieve them as needed.

The winter I became a mother, I spent countless hours in a chair by the big window, watching the chickadees as I nursed and rocked two tiny babies. I recall learning back then that (unlike winter chickadees) human mothers actually loose brain cells when they are pregnant. In those early weeks of motherhood, the size of my brain hardly seemed to matter; getting to know two new humans, keeping them safe, loving them was all I could think about anyway. Still, watching the little birds flock around the feeder was nearly meditative.

The chickadees we see out the window now are likely generations removed from the birds I watched 14 years ago. They have a hierarchy, I’ve read, although I can’t tell who’s in charge in of our little flock. When I approach to refill the stock of seeds, the birds call – to each other, I presume, but I talk back to them anyway, and stop sometimes to watch the ones perched closest to me.

In other places, I’ve fed chickadees right from my mittened hand. But the wild birds in our yard remain just wary enough to stay out of reach. Perhaps it’s because they know I also tend to a cat who is far too curious about their comings and goings.

Boots (the cat), who came to live with us just before the winter solstice, is fascinated by the birds. We don’t know where he lived before he joined our menagerie, so I don’t know if his former home had a window to look out and birds to watch. He spends hours on the windowsill, tail in some stage of movement, from slightly twitching to frustrated wagging. He meows and paws at the glass, or crouches as if ready to pounce. It all makes me think Boots will have to forever be an indoor cat – or wear a collar made of bells if he’s ever allowed outside.

Although the chickadees are the most loyal to our feeder, sometimes their flock expands to include a couple of red-breasted nuthatches, or a pair of blue jays pops in for a bite. A few weeks ago, a couple dozen Bohemian waxwings alit on the highbush cranberry on the other side of the driveway, all showy black eye streaks and bright, yellow-tipped tails. And just Monday, a small group of common redpolls scavenged the fallen seed below the feeder.

But the chickadees are the regulars, the reliable birds I know I’ll hear calling from somewhere nearby any time of year. And in a year like this one, it’s nice to know there are some things that are steadfastly similar to how they’ve always been.

Sunday afternoon, I snuck in a few ski runs with my teenaged daughter. She’d spent much of the day competing in a ski race and was tired from the hours on the hill, the earlier-than-usual race day wake-up call, and the emotional and mental exertion of competition. Add to that this winter’s weirdness of booting up and eating lunch in a cold car, and I wouldn’t have blamed her if she’d opted to go home and curl up someplace warm and cozy with a good book. 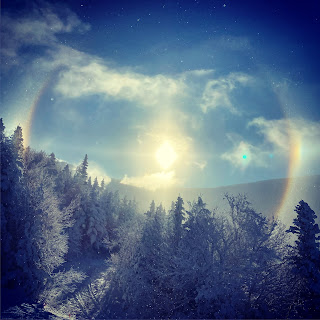 But I’m glad she chose to ski with her mom instead.


The older my children get, the more I find myself cherishing the stolen moments – an unexpected ski through the woods with my son, a quiet hour of piecing together a puzzle with my youngest, an afternoon on the mountain with my oldest girl. There are plenty of times where these growing children of mine retreat to their rooms as soon as they are home from school, or skate off to the lift with their friends without a backwards glance, or are aggravated by my very presence. And I’m (mostly) OK with that. It’s all part of the process of growing up.

There are also many moments of teenage angst, siblings annoying each other, the stress of making their way through middle school – on top of the constant curve balls of doing so during a pandemic – and a mother (me) who doesn’t always have the patience to gracefully dance through it all.

Somehow, Sunday afternoon, I convinced Ella to keep skiing. Decision made, we clicked into our skis and pushed away from the race day hubbub toward the lift. We headed to the summit of Cannon, passing through the mid-mountain snowmaking fog to rise into the cold sunshine of a world above the clouds.

This late in the day, many skiers had gone home, so we had our choice of trails, without having to human-slalom our way around other skiers.

Not so long ago, I brought up the rear when skiing with the kids in case they fell and needed help, or to make sure they turned the right way at trail intersections. I hoped, in those days of snowplowing and pony slope runs, that there’d come a time when the skiing pace was a little bit faster. Now, I play caboose because I don’t have a prayer of keeping up. I love watching my kids race ahead of me, all fearless speed and nimble turns.

But Sunday afternoon wasn’t about keeping up so much as just hanging out. We chatted on the chairlift – about what, I couldn’t tell you. I don’t recall the specifics of our conversation, but I am holding tight to the feeling of just being with my daughter. No stress, no angst, no more race day nerves.

Just a mom and her girl, sunshine and snow, and a few stolen ski runs.

Posted by Meghan McCarthy McPhaul at 3:58 PM No comments: