My son spotted the first fox one morning last spring as we were on the way to school. There, in a field we pass multiple times a day, sat a small red fox, with black-tipped ears and bushy tail, who seemed to be gazing at the mountains. 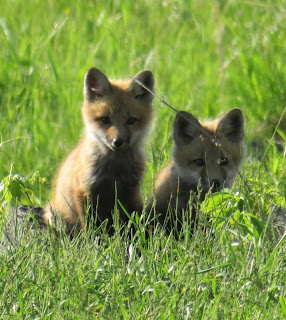 So began my obsession with a local fox family.


We started looking for the fox each day, hoping its mom was in that field somewhere. One day, on the way home after dropping the kids at school, I saw two foxes. Soon, we realized there were four kits.

Through the next several weeks, as the hills evolved from brown to green and the temperatures warmed toward shorts and flip-flops weather, we saw the foxes almost daily. I would slow the car each time I passed the field and stare at what had before simply seemed a pile of rocks – but which we determined was the foxes’ den.

Sometimes, if I was driving by solo or out for a jog, I’d stop and watch the foxes from across the road. The kids loved to see them, too, but I was infatuated.

For about two weeks in June, we saw them every day, either on our way down the hill or on our way back up – sometimes both. They’d be perched in a spot of sunshine, alone or in pairs, sometimes the fuzzy ears of all four peeking above the rocks and tall grass. Often they’d be looking toward the mountains, sometimes curiously gazing at the road with their bright little eyes and black snouts.

We never did see a parent fox, and I imagined an exhausted mother and father – red foxes work together to raise their young – tuckered out inside the den after a night of hunting to provide enough to feed four fast-growing babies.

I imagined a den which had seemed snug and cozy at the end of winter, when the kids were newborn and tiny, becoming overcrowded as the little ones grew bigger – and figured Mama Fox probably kicked the increasingly boisterous crew out so she could get some rest: a fox’s variation of, “For crying out loud, go play outside!”

As the fox kits grew bigger, they also grew braver, wandering further from the den. I watched them hunt in the field and play-wrestle with each other. Once, I rolled down my window and scolded one of the kits for creeping too close to the sparse traffic. I was terrified we’d come down the hill one day and find a dead fox in the road.

Instead, the kits gradually disappeared from our view. Multiple sightings each day diminished to a couple a week, then none at all, as the nearly-grown foxes dispersed from their family unit.

Still, I kept looking at the field, wondering where they were. Perhaps, I thought, they were wandering through the woods between the den and our house. Maybe they’d moved – safely – across the road and up the hill, or into some forest-edged fields closer to town. Or they’d grown into a more nocturnal schedule and were simply sleeping away the daylight hours in the same old den.

While it’s been months since we’ve seen the foxes in that field, I still look as we pass by their old den, hoping to see a glimpse of a ginger tail or the black tip of a fuzzy ear.

Over the years, our game camera has captured images of both red and gray foxes, and we see fox tracks through the field and along the Woods Road throughout the winter. This time of year, we often smell the subtly skunky scent red foxes leave at various posts throughout their territories during mating season.

Lately, I’ve noticed a series of tracks crisscrossing the crusty snow near where the foxes denned last spring. I’m hoping that means they are setting up house again, preparing for the next litter of kits, and that we’ll get to watch them emerge from the den come springtime to gaze at the mountains, watch the traffic go by, and carry on their foxy ways.

Just outside our front door, there’s an obscure labyrinth of paths that leads through the field and into the woods behind our house. These passageways are never so clearly traveled as during the winter months, when markings in the snow reveal the passings-by of critters large and small, human and non-human, often furred but sometimes feathered.

As often as I can, when there is snow covering the ground, I head into the woods with the dog, who wiggles in full-bodied, happy anticipation of the smells she will sniff and the squirrels she might chase. Usually I travel by ski, but if the snow is deep and untracked, I wear my snowshoes. I may enter the woods from the edge of the road or the front yard, on the path just below our springhouse or at the back corner of the field.

However I get there, my main route is along what we call the Woods Road, a traverse built years ago through the forest by my husband’s grandfather. Because I have traveled this road in all seasons for many years – including when my children were tiny and, therefore, moved at a dawdling pace that allowed for more careful observation – I am familiar with the places where game trails intersect the old road, where the squirrels sometimes stash their winter cache of food, which trees the pileated woodpeckers favor in their search for tasty insects.

During the snowy season, the Woods Road becomes an open canvas, one shared by many travelers. Here and there, other paths enter the road from neighbors’ yards, and for a stretch, the road will be leveled by wide snowshoe treads, or marked for a ways by slender ski tracks. Sometimes I am the first one there after snowfall, leaving a trail for others to follow if they’d like, although the Woods Road is broad enough to accommodate more than one track.

Perhaps it’s because I can see more clearly what’s been sharing the road – if only in space, not time – but it seems there is more condensed travel along this route in winter. I like to think we human woods wanderers are helping the creatures who live in the wilder part of the neighborhood, packing out a trail so they may travel more easily during the hard winter months, finding food, evading would-be predators.

Once, a few winters ago, I was startled by a snowshoe hair who leapt across the trail in front of me. More often, I find the hares’ distinctive footprints hopscotched across the Woods Road. Also there are the split-heart-shaped tracks of deer, as well as prints from foxes (often), bobcats (more rare) and wild turkeys (by the flock).
The porcupine trails are easy to spot; the needle-spiked critters seem to feel no need to hide their travels. If the snow is deep, a trough forms through it where the porcupines shuffle from den to
hemlock grove and back. If it is shallow, their pigeon-toed footprints show the way they have gone. They also leave the nipped tips of hemlock boughs along the ground and yellow birch trees with large patches of gnawed bark.

Where the wild ones go on either end of their Woods Road travels, I have little idea. Often, I look for tree hollows that may house barred owls or sleeping raccoons. I wonder where the deer bed down during the short winter days, until they come to our field in search of old, frozen apples. I imagine there are bears denned up somewhere not too far from our home.

The Woods Road leads down from our house to an old bridge over Bowen Brook, where in summer the thirsty dog pauses to drink, and children have been known to dip toes into cool water. From there, the dog and I follow the road around the bend toward the idle sugar house, up through a boggy area only easily passable when it is frozen and hard, and back toward home.

We come to the woods in all seasons, soaking in the quiet there. In spring, we revel in the unfurling of new leaves. In summer, we welcome the coolness of the shade. In autumn we find wonder at the vast colors of the trees. And in winter we look for glimpses of the forest’s secrets revealed along the Woods Road.