As anyone who reads this column even occasionally knows, I love winter. When others are lamenting the arrival of cold and snow in December – and its continuation after the winter holidays and beyond – I am hoping for more snow and enough cold to sustain good skiing. 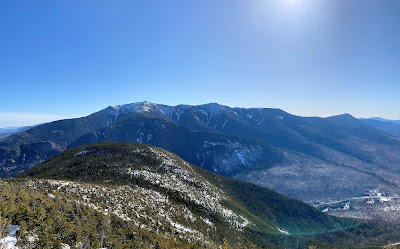 After the stretch of warm, sunny days we had last week and into this one, though, it’s hard not to look forward to spring.

Last weekend featured two blue-bird days on the mountain. Sunday afternoon, after exploring some of Cannon’s finer spots for skiing and sightseeing with the group of 6- and 7-year-olds I help coach, I met up with my own kids and enjoyed the rare occasion of skiing with all three of them. (Yes, they now have to wait for Mom at the bottom most runs.) It was so warm that I stripped down to a t-shirt and vest. We eschewed the most crowded places on the mountain for long, sunny chairlift rides and laps of turning through perfectly soft, not-quite-slushy snow.

Once home, the kids swapped ski duds for shorts. There was front porch sitting and passing of the football, as well as their recent favorite driveway game – while they wait for the yard to melt out – wall ball off the last big snowbank in the shady (and muddy) corner of the driveway. We checked out the spiky shoots of the crocuses poking through the barely thawed dirt of the window garden, and we’re keeping an eye on the front garden, where we planted bulbs between the perennials last fall.

Even the dog, who embraces just about any kind of weather, has seemed happier than usual outside. She’s taken to lying in her favorite warm weather spots again and looks at us mournfully when we suggest it’s time to come in. If there’s sun to lie in, mud to get messy in, and a few remnant patches of snow for blissful rolling, she is a happy girl.

We weren’t, of course, the only ones soaking in the early spring goodness. Baselodge restrictions this year have brought the ski area tailgating game to a whole new level, and every parking lot at the mountain boasted mini grills, chairs and tables set up next to truck beds, and folks enjoying a variety of beverages. On the short drive home, we saw three bicyclists pedaling away, seemingly oblivious to the months-long pileup of road salt and sand along the road edges. People were out doing yard work or playing in the park or gathering with neighbors in driveways.

I’ve been around long enough to know that a couple of nice weeks in March does not mean spring is really here. I’m certain it will snow again before we get through April – probably the day after the snow tires come off my car. In the meantime, I’ll take all the t-shirt-skiing, front-porch-sitting, early-blooming-flowers, and gathering-together-in-the-sun days that come my way.

Posted by Meghan McCarthy McPhaul at 3:36 PM No comments:

A Year Far from Normal

A year ago this week, lots of things changed. Over the course of a weekend and with little preparation, my kids’ schools moved to remote learning. My boss called to say the office would be closed until future notice. Ski season ended early and abruptly. All matter of plans were canceled or indefinitely delayed. At first, I thought this everything-is-shutting-down phase would last only a couple of weeks, then the whole pandemic thing would blow over, and we’d be back to normal.

A year later, I’m not sure what “normal” means anymore. In the first weeks of “isolation,” we did, indeed, feel isolated. I took to doing the grocery shopping only once a week – no swinging into the store on the way home for a gallon of milk or a carton of ice cream, especially since we weren’t going anywhere anyway. I’d drive straight there, then straight home. The only other stop was the gas station if I needed to fill the tank, but I was driving so infrequently that those stops were rare.

For weeks, we hardly saw anyone other than ourselves. We’d occasionally walk over to my parents’ house or stop by my in-laws’ to visit outside. There was a group of five or six college kids who spent a couple of months in the house around the corner after their campus closed, and they’d come through the front field chasing frisbees. Virtual meetings hadn’t become the norm yet, so we only saw other people, even through a screen, maybe once a week or so.

Until April, when two friends who happen to be next door neighbors to each other – my youngest daughter’s pal, and my son’s buddy – had a drive-by birthday party. A line of a dozen or so cars gathered on a side street off their quiet road and waited for the allotted time. Then we drove by their houses slowly, honking like crazy and waving out the windows of our cars. It was so strange. And so wonderful to SEE people, our friends, folks who not so long ago we’d interacted with face-to-face almost daily, even if only in passing.

I hadn’t realized – not fully – how much I missed that interaction. I cried most of the 10 minutes of that ride home, hiding behind my sunglasses so I wouldn’t have to try to explain to my kids something I didn’t quite understand myself. On that drive home, my youngest, who had a daily school check-in with her class, said she wished she could see her friends in real life, not through a computer – or out the window of a moving car. My older daughter lamented the fact that she hadn’t seen any of her friends in weeks, virtually or otherwise. My son said he missed his friends, too.

As summer arrived, we started venturing out more, meeting friends at the river on hot afternoons or for hiking adventures or outside movie nights. It wasn’t quite “normal,” but it was close. I took my kids on their first backpacking outings, and we camped for a few days near the ocean in Maine. I embarked on daily walks through the woods, a habit I continue, in large part to maintain my sanity during these ongoing strange times.

Some of these things – the hiking and backyard fires and gathering outside – probably would have happened over the course of 2020 anyway. But I think I cherished this season – the pandemic summer that came after the spring of so much weirdness – even more than usual. I was so grateful to live where we live, to have woods right out the front door and mountains within sight.

And I’ve been grateful since the end of that summer to have my kids (mostly) back in school. I’m still not used to seeing them walk out the schoolroom door with masks over their faces – and I probably never will be – but I’m so thankful that they are IN school, that those masked faces are with other masked faces. Learning together, rather than in the isolation of a quiet bedroom, looking through a screen.

I’m thankful that educators and coaches and parents and health care providers have figured out how to mitigate the dangers of the virus so that my children can be in school and play sports – even if it looks different. I’m thankful that we have been skiing through the winter. I’m thankful that my work – and my husband’s – has continued through this, even while I’m so, so, so tired of meetings on a screen. I’m thankful that so much of our family lives within a couple of miles of us.

I know we have been fortunate in a year so devastating to so many.

But I miss a lot of things, too. I miss hugging my friends. (So much!) I miss big family dinners, with three generations of McCarthys and McPhauls gathered together, sharing new stories and old. I miss planning trips to other places. I miss talking to people and being able to see their whole faces. I miss collaborating with colleagues through in-person meetings, or just a quick walk across the hallway to someone else’s office space.

I’m tired of reminding my kids to grab a mask on their way out the door – to anywhere. And of checking the state’s Covid map and numbers. Every. Single. Day. I’m tired of worrying every time I feel a tickle in my throat – or when someone sniffles next to me in some public, socially-distanced space.

If the past year has taught me anything, it’s to try to take things, as much as possible, day by day. To not plan too far in advance, at least for now. But that is not my nature. So many times over the last 12 months, I have thought things would be back on the road to “normal” by next week, or next month, or two seasons for now.

Last week, my parents got their second doses of the vaccine. A little girl in the classroom where my mother was substitute teaching asked if that meant she could hug my mom the next time she came in – like she used to. We’re not quite there yet. But I think – really, this time – normal just may be on the horizon.

Posted by Meghan McCarthy McPhaul at 6:36 AM No comments: