Give Peace a Chance

Every year, near the end of September, the elementary school my children attend celebrates International Peace Day. In the weeks leading up to the celebration, the students and teachers discuss ways to be peaceful – respecting others, using kind words, working and playing together. In groups of various ages, the students work together on a project – this year, creating large 3D block letters to spell “Building Peace.” They also make pinwheels to carry peaceful thoughts into the winds and peace flags bearing peaceful colors and words. 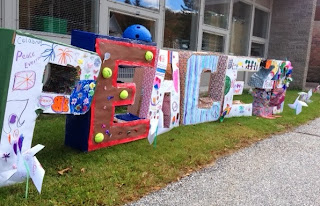 When the Peace Day projects started at school, my daughter came home singing, a la John Lennon, “All we are saying is give peace a chance.” She filled several pages of paper with colorful hearts and rainbow-hued peace signs and hung them around her room. Did all this thinking of peace make her any less likely to bicker with her siblings? Not necessarily, but it did provide a reference point for how we could act at home, toward each other, to get along – at least most of the time.

During Tuesday’s Peace Day assembly, each grade shared its own projects. The fourth graders had reached out to schools around the world to talk about peace. As I looked at the videos and photographs of other elementary school students in other parts of the world discussing what peace means to them, I noticed two things.

The first was that the classrooms and the students in these photographs – from Bulgaria, Macedonia, Myanmar, and Korea – could have been classrooms and students from Anytown, U.S.A. The clothing was a bit different, and the languages, of course, but there were the same Smart Boards and student art on classroom walls and the same young faces, eager to learn. Eager for peace.

The second revelation was that the students, no matter where they were from, had similar definitions of peace and used similar imagery to describe it. Birds and flowers were popular words used to convey peace. Respect for others, being kind and thoughtful, and thinking of the future were peace-inspiring actions repeated by students from each of the schools.

With a constant stream of news that relays anything but peace – violent attacks in Kenya and Pakistan and Washington, D.C., along with the perpetual and tiring squabbling of our nation’s lawmakers – I thought it would be prudent for leaders everywhere to take a cue from the children, to pause for a moment and think about what it takes to be peaceful.

One of the quotes shared Tuesday came from a great champion of peace, Mahatma Gandhi: “If we are to teach real peace in this world, and if we are to carry on a real war against war, we shall have to begin with the children.” Celebrating Peace Day seems a good place to start – and showing kids that while other people from other places may hold divergent beliefs and have other traditions, we’re really not that different from each other.

We love our families. We like to play with our friends. Problems are best solved when we work together. Beautiful flowers, birdsong, and kindness are peaceful, no matter where you live, what language you speak, or what religion you follow.

As I looked around the school assembly and saw the children, from kindergarten through 6th grade, who had worked so hard to create projects for Peace Day and shared them proudly, as I listened to the poems of the 5th and 6th graders and heard the small voices of the 2nd graders joined together to sing, “Doing the right thing isn’t always easy. Doing the easy thing isn’t always right,” I hoped these children would hold onto that desire to do the right thing, the peaceful thing, far beyond the walls of their elementary school.

I hope the children around the world will hold onto peace as long as they can, that they will carry it forward into a world that is not always peaceful and inspire all of us to be kinder and more thoughtful, to simply give peace a chance.

Woolly bears on the move


The frost of the past two mid-September nights has set the woolly bear caterpillars to scurrying. Where they’re going, I’m not sure, but the little black-and-brown ’cats are crawling in droves down the driveway, along the edges of the front porch, and all over the roads near home. 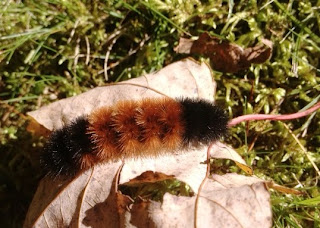 I did notice this morning that nearly all the woolly bears I spotted wandering the driveway were headed south, which old-wives-tale logic says foreshadows a “bad” winter. Of course, “bad” winter in normal parlance translates in skier speak to “super snowy winter,” which bodes well for the snow lovers among us.

Other woolly bear lore says the coming winter’s weather can be predicted by the width of the middle, brown band of the fuzzy caterpillars. Supposedly, the wider the band, the milder the winter. I didn’t bother to measure the bands of the caterpillars in the driveway this morning… just tried not to step on them.

Woolly bears are the pandas of the caterpillar world – and probably the most well recognized, especially by children, who are easily enamored by the furry-looking critters. Pick one up, though, and it’ll curl into a ball, prickly “wool” side out. That’s not so intimidating to humans, but apparently it discourages birds from feasting on the little fuzz balls.

Whatever the woolly bears’ stripes and direction of travel say – or don’t say – about the impending winter, their bustling about lately is a sure sign that fall is here. The last two chilly evenings have set the woollies to seeking winter homes. These “bears” are certainly a lot smaller than our real bears – the black bears – but both types hunker down under cover to weather the winter. Woolly bears curl up through the cold months, waiting for spring to cocoon and transform into rather dull-looking yellowish-brown Isabella tiger moths.

The woolly bears’ recent activity is a good reminder that even in these days of lingering warmth and sunshine, it’s time to put up the firewood, clean out the gardens, and hang the storm windows. Winter is coming; I, for one, hope all those south-bound woollies are telling us it’ll be a snowy one.

Original content by Meghan McCarthy McPhaul, posted to her Blog: Writings from a full life. For more information about woolly bear caterpillars, I recommend the article found at this link:
northernwoodlands.org.

Posted by Meghan McCarthy McPhaul at 7:30 PM No comments:


You don’t have to travel far through rural New England to find reminders of old farms. They are evidenced by tired barns sagging in unkempt fields, stone walls meandering along roadsides or forgotten and crumbling in places it seems impossible there was ever an open meadow, and houses that stretch from front porch to back ell to shed to barn, all connected over time and with towns often grown up around them where there used to be pastures. 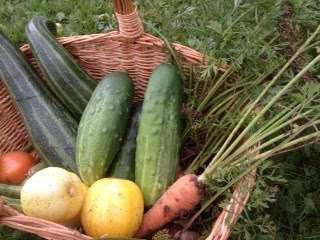 There are still working farms here, of course, but the landscape – in town and country both – tell us there used to be more.

In my daily meanderings, I regularly pass two old farms. Both have been farms for many generations and have evolved over the decades in various ways. Both have also sat idle for many years. And in recent weeks both have exhibited new signs of life.

The first is known as Iris Farm, although the sign bearing that name no longer hangs from the post at the end of the driveway. Less than a century ago Iris Farm boasted a proud herd of Ayrshire, which provided milk for local schools and hotels, including the nearby upscale Pecketts-on-Sugar-Hill, which was owned by the same family.

More recently its fields have held Highland cattle, a couple of horses, and a flock of sheep whose lambs were a happy, fuzzy harbinger of spring. Red-winged blackbirds still chitter away from the fence posts in summer, and swallows still swoop around the barnyard, but the farmhouse and barn have been vacant for a couple of years or longer. Without the animals and the big round bales of hay in the fields, Iris Farm has seemed lonely.

So when a small herd of big, black Angus cattle appeared this month people noticed. To tourists traveling along the picturesque road, those cows are probably just another part of the pretty scenery. To those of us who go by the farm each day, they are a welcome sign of life on a quiet, old farm – an indication that, while the farm is not the bustling place it once was, the barn won’t likely be allowed to rot to the point of collapse, and the fields will remain open to the mountain view.

Ski Hearth Farm, a few miles away, has likewise cycled through changes over time. A hundred years ago it was a small dairy farm, not unlike Iris Farm and other small dairy farms all over this region. Mere days before the Hurricane of ’38 knocked down much of the farm’s timber and flooded the basement of the farmhouse where the year’s crop of root vegetables was stored, newlyweds Sel and Paulie Hannah purchased the property.

The Hannahs changed the name from Temple Farm to Ski Hearth Farm, a nod to the property’s new dual purpose of raising food during the growing season and housing skiers through the winter. Ski Hearth evolved into a truck farm, carting vegetables to restaurants and markets around the area and famous for “Sel Hannah’s potatoes.” When Sel died in the early 1990s, his daughter Joan came home from Colorado to run the farm, which she did for a good many years before putting it up for sale.

Since Joan sold the farm, it has had three new owners, a name change, and – for the past several growing seasons – dormant fields. Last month Davis Mangold purchased the farm. He grew up on a farm in Kentucky, became the first in his family to attend college, and started (and still runs) a successful business. Mangold says he never thought he’d want to return to farming – until one day he did.

Besides reviving the Ski Hearth Farm name, Mangold and his crew are also hard at work reviving the fields, the farmhouse, and the locally cherished and sorely missed farm stand. The first crop – six neat rows of strawberries – has been planted in preparation for next spring. Bright new chicken coops now fill some space in the back fields. There are often tractors in the fields these late summer days, plowing and harrowing and planting.

There’s something forlorn about an empty barn and barnyard, indications all around of someone’s long, hard work – life’s work, often many generations’ worth – at some point, for some reason, abandoned. And there’s something beautifully hopeful about seeing animals return to a pasture and crops return to a field, watching an old farm welcoming new life.