March is such an indecisive month. I think whoever coined the phrase, “If you don’t like the weather in New England, just wait a minute,” must have done so in March. What other month can bring near-summer temperatures, mid-winter snow squalls, rain storms, thunder claps, and sunny blue skies all in one week?

Even after such a weird-weather winter, this month has been intensely unpredictable.

The crocuses bloomed last week, the earliest I can remember them opening to the warming sun. And our first robins of the year flew into the yard weeks before their normal arrival date. We’ve had more birds at the feeder than ever before: chickadees and blue jays, nuthatches and woodpeckers, goldfinches and purple finches.

I’m loath to bring the feeder in with so much color and activity there, but I’m sure by now the bears are about, and I’d rather keep them out of the sandbox, which is next to the bird feeder. My kids rediscovered that sandbox last week. It’s been there all winter with hardly a skim of ice, but suddenly, with warmer weather, it was the new hot spot.

Maybe the sandbox is just better in shorts and t-shirts. And that’s what the kids were wearing, casting off their more practical mid-March outfits and digging into the summer clothes as soon as they’d walked in the door from school and dropped their backpacks.

My littlest one even asked for bug spray. I’m not sure if the bugs were actually in the sandbox with her or the request was just an innate response to wearing shorts. Regardless, the kids spent hours in the sand, making some combination of mud-sand whoopee pies and cookies and cakes, digging tunnels, getting thoroughly, happily dirty. It’s the most peacefully the three of them have played – I don’t know, maybe ever. As soon as dinner was in their bellies, back out they went until the dark crept in, later now that we’ve changed the clocks.

The next day dawned sunny and warmish, moved to a sky clustered with thunderheads, and ended with cold and wet. And then it snowed. Back out came the extra layers for skiing over the weekend, the neck warmers and thick fleece shirts. Flip-flops, still covered in sand, were chucked once more into the depths of the closet and replaced again by snow boots.

Yes, we are in that familiar March place, where we might ski or bike or walk along the beach at Echo Lake. Maybe all three in one day. The extended forecast calls for a continued mixed bag of sunshine, rain, snow, warmth and chilliness, sometimes all in the same day.

So, I’ll hold off washing up and packing away the winter gear for a while longer, at least until mid-April. March is such an indecisive month. You never know what’s coming next, and it’s best to be prepared – for a little bit of everything.

We are three and a half months into ski season, with who knows how long to go. Despite the weird and wacky weather, which has brought us more rain this winter than snow, the skiing has been plentiful, and ski season has been busy. Busier than usual this year, because my children have entered into the world of ski racing, and I have jumped back into a weekend coaching gig. 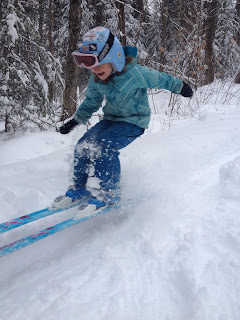 Throw in a smattering of ski writing deadlines, which sometimes involve traveling to other ski areas, and it all means ski season is an all-consuming entity. The mudroom is a muddle of skis and boot bags and helmets. The gear collection spills into the living room, where ski boots are lined up to dry by the radiator, which is piled high with hats, mittens, and neck gaiters.

Notes about night skiing and spring skiing and adaptive skiing are scattered around my makeshift office at the dining room table. House projects we started months ago, including an ambitious plan to shift bedrooms, have been abandoned in the fullness of ski season. Non-skiing plans are delayed to that vague point of “after ski season,” and there are some friends we just don’t see as much this time of year.

This ski-centricity is a phenomenon probably impossible to explain to someone not involved in skiing. But my skiing friends and cohorts will understand: skiing is not merely a hobby, or a way to pass the normally cold and snowy months of winter, or even a passion. It is an inherent, un-extractable part of simply being.

Skiing is why we wake up before the sun during the darkest days of winter. It is why we don innumerable layers on the coldest days of the year and are willing to face the elements, whether sub-zero chill, gale force winds, sleet, rain, snow, or sunshine. It is why we forgo other things to buy equipment and passes and why we stay up late tuning skis. It is something we think about, sometimes dream about, during even the dog days of summer.

Skiing is why I moved west after college, seeking higher mountains, deeper snow, a skiing life in a skiing town. And it is why, when I came back East five years later, I landed in the mountains, why I am here still.

My dad used to tell me when I lived out west, probably in an attempt to lure me home again, that skiing is skiing. Doesn’t matter where you do it, it’s the same. I’d scoff at such a crazy concept as I headed out to ski Colorado powder on a mountain whose base was 5,000 feet higher in elevation than my home hill’s summit.

The snow in Crested Butte is a good bit different than the snow on Cannon Mountain. And it’s different, probably, than European snow and Tahoe snow and Midwestern snow. But it turns out that skiing IS skiing. Yes, skiing powder is different than skiing hard pack (and goodness knows there have been days this season when I have lamented the ice and longed for a deep dose of Rocky Mountain powder). Groomers are different than bump runs or glades. Flats are different than steeps.

But there’s something in the feeling of it all that is intrinsically the same. Skiing is freedom and grace. It is strength and precision and the thrill of self-made speed. It is unbridled joy at each perfect turn – and the imperfect ones, too.

Some ski seasons are longer than others. This one, here in the East, has been particularly challenging in many ways, and there are moments when I feel ready for the busy shuffle of ski season to shift definitively to spring, ready to pack away all the gear and move on to the next season, ready to sleep in and not hurry everyone out of the house for first chair.

But then I click into my skis and arc my way down a mountain and everything else fades away. There is only skiing then, and it is worth a little shuffling.