Over many years of reading many things, I have written down phrases that resonate with my mindset at the time I read them. One of these, jotted onto a pink sticky note and stuck to my desk some time ago, is a quote from Ralph Waldo Emerson’s Nature: “In the woods, we return to reason and faith.”

I go often into the woods, seeking – if not reason and faith – at least the quiet space to let my thoughts drift where they will, to regroup both mentally and physically. I feel lucky to live in a place where I may wander wooded trails that branch from my own yard or from downtown or from unmarked entryways along any number of nearby roads.

So the prospect of a master trails plan that would link some pockets of existing trails to each other, create a few new ones, and connect these pathways to town centers, schools, and other community centers and recreational outlets is exciting. That’s just what the local Friends of Profile Trails group has set out to do in Franconia and surrounding communities, retaining renowned trail-builder John Morton of Vermont-based Morton Trails to assist in the effort.

I attended an informational meeting hosted by the group last week and was impressed to see in attendance not only interested locals and the dedicated group undertaking the endeavor, but also leaders from the Division of State Parks, U.S. Forest Service, and the Forest Society, along with representatives from the more local Ammonoosuc Conservation Trust and Adaptive Sports Partners of the North Country. All have a vested interest in the development of a comprehensive trails network.

So, in various ways, do all of us who live, work, and recreate here.

The day after the meeting, before picking kids up from school, I went for a run with the dog in Fox Hill Park, exploring a new trail that traverses recently conserved property now connected to the town-owned park. How lucky I am, I thought as I ran along the Gale River, then up through a mixed and leafless forest and toward a view of Cannon Mountain, to live in a place where it is so easy to hit the trail – and to quickly resurface in town or at home or to work.

In this area of the world, many of us have this gift of easy access to trails. Residents of downtown Franconia can explore the network of paths branching through Fox Hill, of course, and I often run into familiar faces there. Those in the Easton Valley can walk or bike to and through the labyrinth of trails traversing Forest Service land. Others are easy distance to town forests and private property open to public access and conservation lands that are local favorites.

Spending time on these trails, in the woods, is a good way to retain a sense of reason in a world sometimes seemingly gone mad – and to find faith in many things. Developing a thoughtful system for connecting these trails so they may be used for both transportation and recreation will make them even more valuable.

I have walked the paths winding through the woods closest to home countless times. Sometimes I go alone. Usually I have a good dog for company. Often I have gone into the woods with my children – first carrying them, then walking slowly as they toddled along, and now keeping stride as we explore together.

We find many things in the woods – signs of the changing seasons, hints of the animals who pass along the same track we follow, wildflowers and tiny mushrooms and newly formed brook ice with intricate patterns. And with each journey, perhaps, a bit of the reason and faith Emerson found in a different landscape so many years ago.

I attended my 25th high school reunion last weekend. Because my parents moved away about 20 years ago, I rarely have a reason to visit my first hometown. And because I wasn’t in any particular rush when I first arrived in town, I spent a bit of time driving around to once-familiar haunts. 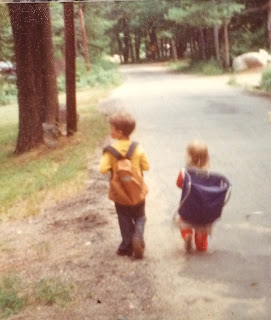 As I cruised the streets where I spent my first 18 years, I found memories around every corner.

Although my first scheduled stop was the elementary school where I attended kindergarten through 5th grades, I drove past the Route 9 exit that would have brought me most directly there, continuing instead for another mile or two so I could drive past the house where I grew up, a pretty 1720 Cape with dormered windows and enough memories to fill an entire book case.

There was the bedroom window where I spent many a contemplative moment looking out at the world. There was the garage whose doors I kicked the soccer ball against as I waited for winter to give up and the green grass of spring to arrive. There was the turn into the driveway where I came in too sharply one day on the way home from my paper route and crashed my Huffy bike and tore a hole in my new corduroys. There were the gardens, now reconfigured, my mother cultivated carefully for more than two decades.

Onward I drove, turning right onto Maynard Street, following my old jogging route. I’d forgotten how many beautiful old houses are tucked away there, carefully tended historic gems set among much newer houses. I let my whims guide where I turned the wheel, and my meanderings led me past the bank where I opened my first savings account, the library where I checked out my first borrowed books, and around the corner to the YWCA where I went to preschool. Tucked under a tree was a fenced-in area containing an assortment of colorful toys scattered around a plastic slide where the latest generation of preschoolers plays.

I drove past my old schools and the church where I attended mass the Sunday mornings of my childhood, the house where one of my first best friends lived, the sidewalks where we rode our bikes together to get penny candy and bubblegum downtown. I maneuvered my way around the center-of-town traffic rotary, which seems more perplexing after so many years away, and traveled along the narrow, winding road where I once got too close to the edge and took off the side mirror of my little pickup truck.

Along the way, I thought how strange it seems that a place I haven’t much visited in the past 20 years can still seem so familiar, despite the growth and changes, the new malls and altered storefronts, the high school that seems twice the size as it was when I last walked its hallways to make my way to physics class or senior English or the gymnasium where our rainy-day graduation was staged.

Despite being a self-proclaimed sap, I’m not generally sentimental for my first hometown. This trip I felt a bit of a tug on my heart, though. Maybe because I was traveling by myself, without the banter and many questions of children coming from the backseat – so, left to my own meandering thoughts.

Although I have been away from Westborough for longer now than the time I called it home, this is where I come from. We don’t get to choose where we live as children, but that place – and the people within it – certainly shapes us.

In that way, I am lucky to have spent my early formative years here, where I landed in a class of kids who were good and smart and funny. Because I lived in the same house in the same town from birth until college, and because lots of my classmates did, too, many of these people are kids I grew up with, from preschool through elementary school and on to middle school and high school, from kiddie soccer to varsity, from diapers to drivers’ licenses.

We knew each other when we were all still figuring out who we were, when we were people perhaps different from whom we have become many years later. I suppose, in essence, the spirit of the kids we were all those years ago is still there in our 40-something beings. It’s why we tell each other we look the same as we did then – because we can still see the 17-year-old within, still remember how we laughed and cried together, even if we no longer remember the cause of specific emotions.

I was reminded of how good and smart and funny my classmates were during our few hours together Saturday. Like most people, I’d guess, I keep in touch with a few friends from high school, although we mainly see each other in glimpses on social media. Getting together Saturday felt a bit like when grownup siblings reassemble for occasional family dinners. Around the expected small talk, there was banter and good-natured bickering and – our sixth grade English teacher would be so proud – a spontaneous group sing of the Preposition Song.

There was no sorrow in the parting, just gladness in having seen each other. At least that’s how I felt as I bid goodbye to old friends and acquaintances, and as drove away the next morning, having spent the night with a friend and classmate who still lives in town. I passed my old house one more time, turned onto the road that is a shortcut to the highway, and headed north. Toward home.