Throwing birthday parties is not my forte. Don’t get me wrong – I love birthdays and celebrating them. I enjoy a candle-bedecked cake as much as the next person, and for years I made the kids whatever shape they wanted, although the unicorn nearly did me in. But in this Pinterest-savvy world, I am like the anti-Pinterest. I don’t do well with themed decorations and clever party games and perfectly assembled goodie bags for every guest. 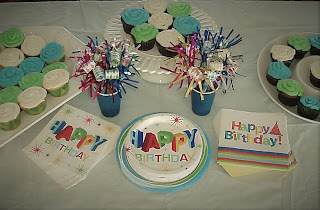 Some parents don’t think twice about hosting a houseful of kids hyped up on sugar and toting noise-makers, but the thought of such a scene puts me on the edge of an anxiety attack. Maybe if we could spread the birthday planning out a bit, it would be OK. But all three of our kids have birthdays within a month, which ups the party planning anxiety.

When my oldest two children were in kindergarten, we threw them a birthday party. The invitee list included the kids’ entire school class – all 12 of them – plus a few other friends. We planned an outside party, because at the mere thought of 15 children under the age of 7 running around my house I felt a colossal headache coming on.

An outside party in January can be tough to pull off, but we went for it anyway. We told the kids to bring sleds. I filled plastic spray bottles with colored water for making snow art. My husband built a fire in the backyard fire pit. He mixed cocoa for the kids and added a little shot of courage to the parents’ mugs. We all stood outside and watched the kids tumble around in the snow.

All was well – until it was time to go inside for cupcakes and presents. That headache I’d felt waiting to attack arrived quickly. Fifteen small kids – and many of their parents – in one living room is noisy. Add the excitement of wrapped presents and the promise of cake, and the noise becomes pure chaos. But the noise was just the tip of the birthday iceberg.

At one point, I glanced over to the window seat table and saw one little girl with a bowl full of nuts sitting next to another little girl who has a severe nut allergy. We quickly separated the two and breathed a sigh of relief. A few minutes later, I looked out that picture window to see one of the more intrepid 5-year-olds down by the (now extinguished) fire pit, hacking away at a log with the hatchet we’d inadvertently left unattended.

It’s a wonder no one went into anaphylactic shock or lost a finger at that birthday party.

That was not the first birthday party we’d hosted, but it was the last one with more than six kids in our house at one time. After that, we did a couple of years of small celebrations, with the kids picking a few friends to join them on a special outing of their choosing. One year, in an effort to go big, but not in my own house, I coughed up a couple hundred bucks and had a party at a big gym. The next year we had a family birthday weekend in Boston instead. I figured that cost about the same as renting a party place. Plus, birthday dinner at Quincy Market was a fun novelty.

The last couple of years, we’ve stuck to birthday treats shared with classmates at school and low-key family dinners. The kids don’t seem to mind – or even notice. Maybe it’s because they’re a bit older now – two reached, by their own definition, pre-teen status this week, whatever that means – and they realize the value of quality celebrating over quantity. Or maybe it’s because with so many local family members, the birthday dinner becomes a big, intergenerational bash – just as much party, not as much stress.

This week we gathered all the people who love my kids best into our home. There were a few presents, and only one adorable 5-year-old. We ordered take-out pizza. The cakes were of standard size and shape. There was no theme, no goodie bags, and certainly no hatchets involved.

It was just the right kind of birthday party.

For about three years running when I was a kid, I wanted to have an ice-skating party for my birthday, which falls this month. Each year, winter would start off all frosty and lovely. The ice would freeze smooth on the pond just down the road. The invitations would go out. And then the January Thaw would arrive, just in time to turn the pond to slush and ruin my plans.

This year, winter has started off with a combination of lots of fluffy snow and brutally cold days. Several days over the holiday vacation week, I felt as if I were wearing a corset as I zipped into my coach’s jacket, so tightly packed were the layers of polypro and down beneath.

So when I snuck out for a few runs early this week, it was blissful to ski without being hunched up against the cold and wearing so many layers that I could barely move. Those runs were beautiful. A bit of fresh, soft snow, great cover on all the trails, and a temperature right around freezing.

As I write this column, it is still solidly winter. The trees are dressed in lacy white. The field is fully covered. The mountain peaks at the edge of my view are snowy. But the forecast looks warm and wet for the end of the week. By the time anyone reads this column, we’ll know how bad it is. I won’t even utter that four-letter word that begins with R; it’s dirtier than the mud it causes. Alas, I’m afraid it’s coming.

The January Thaw is a bit of an ambiguous concept. There’s no exact date for the dreaded phenomenon, and some years it doesn’t even happen – or it comes in December or February or, the worst, multiple times over the course of a winter. The Farmer’s Almanac, that bastion of long-range weather prediction that meteorologists urge us not to believe because the science is vague, or, perhaps, non-existent, describes The Thaw thusly:

“Small ‘blips’ in the overall pattern reveal noticeable fluctuations that can be observed from year to year. These blips are called singularities in weather lingo. Indian Summer, a period of unseasonably warm weather that usually appears in mid-October, is one such blip. The January Thaw is another.”

I will say that I much prefer the other singularity – Indian Summer – to this one. The Almanac goes on to say the January Thaw typically sees temperatures an average of 10 degrees higher than the previous week. Well, this is one heck of a thaw. By week’s end, temps are forecast to be in the mid-40s – above zero. That’s about a 70-degree change from a week prior!

If I can find any solace in this weather “blip,” it is that it will be brief – and in the fact that it has been happening (though perhaps not as dramatically) for far longer than I have been lamenting it.

Some years ago, my mother gave the kids a book called “Ollie’s Ski Trip,” written in 1907 by Swedish author Elsa Beskow. Young Ollie loves winter – and snow, skating, sledding, skiing – and is thrilled to meet Jack Frost, but dismayed by the occasional early arrival of winter’s “cleaning lady,” Mrs. Thaw, who forgets when she is supposed to set to work and sometimes tries to melt Jack Frost’s handiwork before spring arrives.

If only it were so easy to control the weather. Here’s hoping Jack Frost follows close on Mrs. Thaw’s heals this January, and there’s plenty of winter still to come.