Remember that feeling, I told my daughter Saturday afternoon. The one of elation that came after you buried the shot and were mobbed by happy, screeching teammates. Remember that one as much as the other one: the sad disappointment of landing on the wrong side of a hard loss. Both are important. 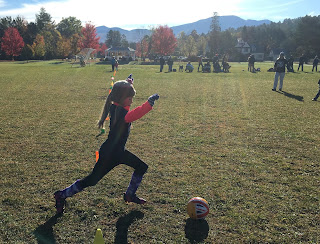 The first time I ended up in a dog pile of happy, screeching teammates I was a freshman in college, and my soccer team had beaten a tough rival. I don’t remember the import of that game, but I’ll always remember that feeling of pure, adrenaline-fueled joy and the camaraderie that comes with being part of a team celebrating in a grass-stained, sweaty heap. That was the same season we lost to another close rival on penalty kicks. Our last shooter was our senior captain – a four-time all-American and steady as they come – and she launched the ball well over the cross-bar, sending our hopes of defending the national title with it.

You win as a team, you lose as a team. And doing either by penalty kicks is a pretty awful way to end a game. But it’s a lot less awful when you win. It took me until college to learn that lesson. Our girls, mostly aged 10 and 11, learned it during Saturday’s annual Halloween Cup after a series of five games where they dominated play – but still ended up without the coveted candy-filled trophy.

Our girls were feeling utterly squashed after the last ball was kicked Saturday. They’d played all day with grit and heart, allowing only a few shots and no goals against them through three regular games, a semi-final, and the championship match. Yet, after a scoreless overtime and a tied first round of penalty kicks, it was the other team celebrating the win, and ours left stunned and teary-eyed.

My coaching partner and I have played a lot of soccer. We’ve felt the highs of winning big games and the lows of tough losses, and we love the game through it all. We told the girls we were proud of them, to hold their heads high, but our eyes brimmed with emotion, too, behind our sunglasses. It’s one thing to go through the disappointment of losing; it’s something else entirely to watch your kids and their teammates feel a loss so deeply.

My freshman year of high school, my team won a single game all season. But I loved soccer, loved playing, loved the team, wanted to get better. A year later, I was cut from the first club team I tried out for. I’d wanted to be on that team badly, and I was devastated. But I got back out there, practiced even harder, kept playing, and made that team the next season.

I was reminded after Saturday’s shootout of another, similar outcome two years ago, when another team of Lafayette girls made the finals and lost on penalty kicks. After a game like that, all you can do is cry a little, then get up and move on to the next thing. Keep practicing, keep trying, keep playing.

The girls from that game two years ago just completed an undefeated season of middle school soccer. I’d bet most of them can reach back in their young memories and recall the disappointment of coming so close to winning their own Halloween Cup, only to be defeated on the last kick. And I’d bet they all have other memories, happier ones, of scoring goals and winning games and celebrating together.

I wish I had a photograph of my daughter in that moment after she made the goal and turned around with an exhilarated leap to face her cheering teammates. I wish I had a photograph of all the girls at the end of every other game that day, when their smiles were proud and happy, when they were at the high end of emotion. Perhaps the best part of being a coach – at any level, with any sport – is seeing that look on the face of someone who has worked hard, made a breakthrough, seen effort transformed into some form of victory.

I don’t know how long these girls will play soccer, but I hope it’s many more seasons. I hope they keep playing, keep learning, keep loving the game. I hope they work through the lows to reach the highs. I hope along the way they all end up in a few grass-stained, sweaty, exuberant, celebratory heaps on the field. And I hope that’s the feeling they remember best. 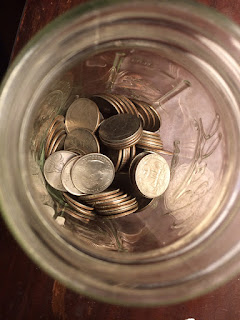