It is a task I do reluctantly in the bittersweet transition from summer to autumn: cleaning out the gardens. Putting them to bed, some call it. It’s not that I don’t like the work. I do – being outside amid the changing colors of fall and the sounds of animals scampering about as they prepare for winter, digging in the dirt that has provided the bounty of summer, soaking up the fresh air and – if I’m lucky – a bit more sunshine.

It’s just that the gardens stay abed for so long; emptying them of summer growth and goodness seems such a long goodbye.

After months of coaxing seeds, then shoots, then swelling plants to grow and bear fruit (or vegetables), after tilling and weeding and plucking off tomato suckers and thinning rows of baby carrots, it is a bit of an affront to pull it all out and throw the remains into the compost heap. Yet, there is something pleasing to restoring some semblance of order to the garden plots that have grown unruly since we sowed the first neat rows in springtime.

Last week’s frost killed anything that wasn’t covered, and a few things that were. The cold was a clear indication that it was time to set to work. The sprawling leaves of the zucchini plants, which had for weeks loyally provided a squash or three each day, turned black. The eggplants, which produced a multitude of pale purple flowers through the summer, but only one tiny fruit, withered to brown. The tomato vines drooped. The basil leaves, which had been a vibrant and warmly fragrant green only the week before, hung shrunken and brittle on brown stems.

I started with the small garden boxes in the side yard, which are easier to tidy than the large garden down back. Out came the wooden stakes that had bolstered the cherry tomatoes, and with them the frost-browned plants, whose vines and leaves and roots had grown intertwined with their neighbors through hot months in the sun. Even in their wasted state the plants were prolific, with tiny green tomatoes still clinging hopefully to narrow stems.

Out, too, came the pea trellis. The early peas have long since been happily consumed or packed into the freezer, but a few withered shoots still clung to the wire fencing. These I removed before rolling the trellis upon itself to store in the back corner of the garage through the long months of dark and cold.

Working around the row of small lettuces that may still grow big enough to eat, I tilled the little garden, breaking up clumps of earth compacted during the growing season, pulling out weeds that had flourished as they hid beneath the vegetables, dragging the long, white skeletal roots of tomato and pea plants from the dry, cool earth.

Occasionally one of my children would join me in the garden-cleaning effort. The youngest picked fallen cherry tomatoes in various hues from the dirt and chucked them into the field as she kept me entertained with a 5-year-old’s chatter and giggles. My son came down with his three-pronged weeder to help rake the chopped dirt smooth.

When I headed to the big garden with potato rake and spade in hand, all three kids trotted down to help with one of their favorite garden tasks: digging potatoes. Of all the magic a vegetable garden can provide for kids (and grown-ups), digging potatoes is probably the most fun: like searching for buried treasure.

As I pushed my spade into the soil, the kids stood by eagerly, focused on the turning dirt, seeking the pale yellow and red of spuds and racing each other to scoop them up. In keeping with our family’s potato-digging tradition, the kids placed the tubers into their yellow Tonka dump trucks, meant for the sandbox, but just as useful in the garden. So, while our potato crop this year was meager (and we had already eaten many of them), we still managed to haul two truckloads up to the house.

There are still lots of weeds in the potato patch. These I’ll yank out this weekend when the sun is supposed to regain some of its summer strength. I’ve left some green beans and cucumbers in place, but have become lazy in covering them against the nighttime chill, so they’ve nearly stopped producing and look more dead than alive. My late planting of shell peas has put out shoots and pods aplenty, but the peas within are slow to ripen in the shortening days. I have hope for the second and third crops of carrots, whose frilly green tops stand tall in the garden box with only a row of lettuce left for company.

Perhaps, then, we’ll pull a bit more goodness from the earth before the gardens are completely tucked in for the season, before we say our last goodbye to this year’s bounty and wait for the gardens’ awakening next spring.


Original content by Meghan McCarthyMcPhaul, posted to her Blog: Writings From a Full Life. This essay also appears as Meghan's Close to Home column in the September 26, 2014 edition of the Littleton Record.
Posted by Meghan McCarthy McPhaul at 6:02 AM 2 comments:


A brief, but wild, storm tore two large branches from the main trunk of an old red maple in our front yard last weekend. The dismantled maple is one of three in a row along one border of our yard, offering shade in summer, beautiful color in fall, and a host of perches for the birds that flit through the fields year round. The tree is lopsided now, leaning away from the woods and toward the mountains, and since it’s in the middle of the group, that whole edge of the yard seems out of balance. 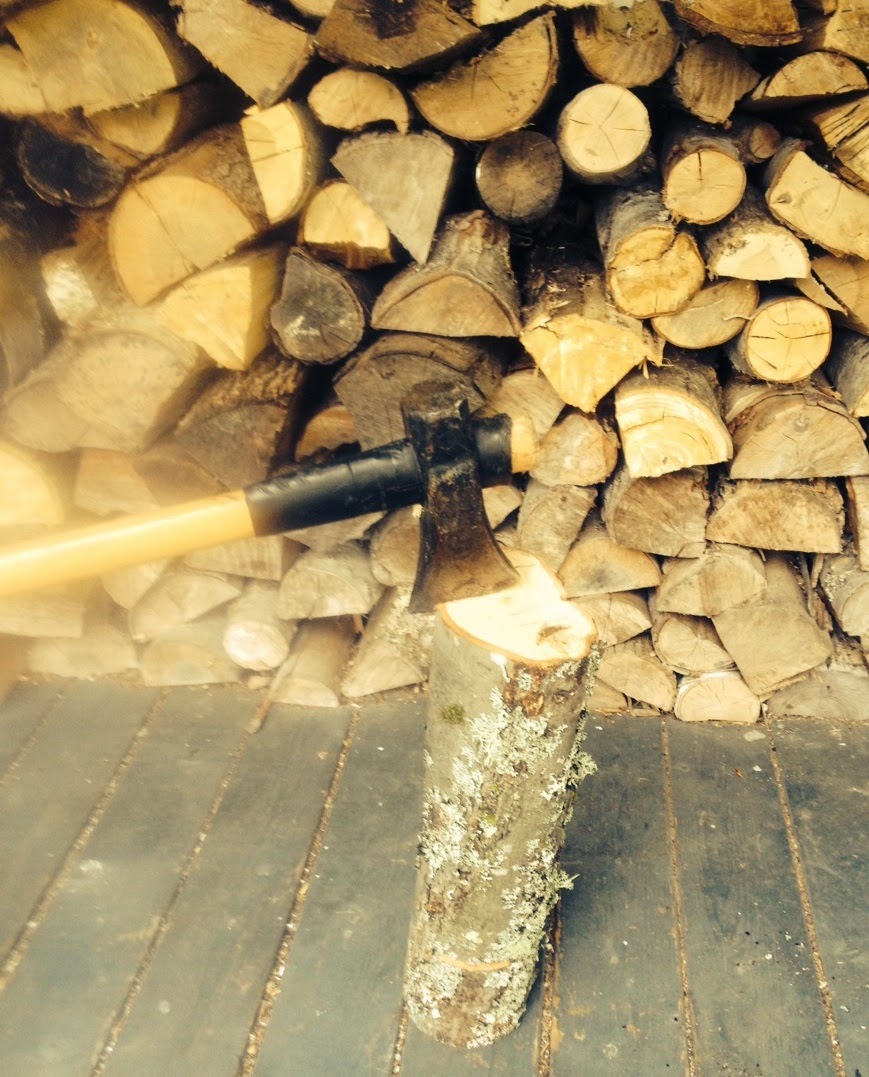 Regardless, the downed tree left us with a job to do, and Sunday morning was devoted to cutting, splitting, and hauling the wreckage away. While my husband used the chainsaw to cut log lengths from the large limbs, the kids and I filled the garden cart and lugged heavy loads of logs to the firewood pile.

It was a good day to be outside working: one of those perfect late-summer days that starts out crisp and warms to just right, puffy white clouds dotting a cerulean sky. As we worked, the neighborhood hawks screeched overhead wheeling on the breeze, and grasshoppers leapt out of our way at nearly every step. The kids grew bored soon enough and wandered off to play, but I reveled in a short morning of manual labor in the sunshine.

Funny how things change over time. When I was girl, about the same age my oldest children are now, I would disappear up the road to a friend’s house at the first sign that firewood work was coming. I dreaded the long hours of splitting and moving wood, the droning of the diesel-powered wood splitter, chucking the split logs down the plywood chute to the basement, stacking them into long rows there to await the persistent cold of winter, when the work would be mostly forgotten and we’d welcome the warmth provided by the wood.

We don’t heat primarily with wood now (although every time I get an oil bill, I wonder if we should), so have no need to stack cords of wood each year, which is probably why I enjoy small doses of firewood work. On Sunday, as my husband revved up the tractor to drag the remaining scraggly branch ends to the burn pile in the back field, I eagerly hauled the splitting maul and wedges out of the garage and set to work hacking the thickest logs into smaller pieces to burn in the fireplace some fall or winter day, when the morning chill lingers for months rather than hours.

There’s something satisfying in the thwack of the maul as it finds its solid target, the crackle of wood as a log starts to split, the agreeably aching muscles that come with working outside. I thought I’d get through a few logs and leave the rest for another day, but the splitting was a nice combination of work, exercise, and rumination. Heft, swing, slice. Thud, crackle, split. There were only a dozen or so logs to split, and once I found the rhythm, I wanted to finish the job.

In the ten years that we’ve lived in this house our woodpile has maintained a relatively healthy level, replenished occasionally with birch logs and apple wood from trees that have fallen in our fields and along wooded edges. Sunday we added maple to one end of the wood pile. The firewood we split and stack as it becomes available is used, eventually, in our fireplace.

It’s a good fireplace and throws a lot of heat into our living room, rather than sucking the warmth out of the house and up the chimney as some fireplaces do. On long winter days, when we’ve been outside in the biting cold, there’s little more welcoming than coming in to a blaze in the fireplace, gathering in its warm glow, where fingers and toes thaw and snow-wet mittens and hats are spread on the hearth to sizzle and dry.

It was an odd juxtaposition to be thinking of winter’s chill in the healthy warmth of an early September day. With the logs split and stacked, I headed inside to make lunch and plan an afternoon of more playful activities with the kids. My back was sore, my arms tired, and my hands stiff from gripping the maul. But the wood pile looked well stocked again. The front yard was cleared of branch rubble, the leaves of the remaining hunk of maple already dappled with red. And there was plenty of that perfect late-summer day left to enjoy.

Original content by Meghan McCarthyMcPhaul, posted to her Blog: Writings From a Full Life. This essay also appears as Meghan's Close to Home column in the September 12, 2014 edition of the Littleton Record.
Posted by Meghan McCarthy McPhaul at 6:13 AM No comments: