It is fully dark these days by 8:15. I know, because when I looked outside the other night to see what the kids were doing in the yard, I could find them only by their voices. And because a few minutes later, the youngest came in for a headlamp – a tool used normally for camping (or spelunking), but in this case needed to prolong the game of 2 v. 2 wiffleball that had started before dinner, taken a second intermission for dessert, and was now continuing, literally, into the dark of night. 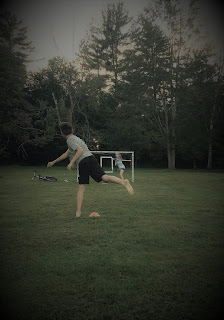 I loved it. The whole unscripted, kid-decided rules, is-anyone-even-keeping-score fun of it. My kids have played a fair bit of wiffleball this summer, along with other spontaneous, sometimes made-up games.

When their California cousins were here near the start of summer, the kids spent hours running around my parents’ yard with one type of ball or another. They made up varying teams, mixing and matching the three California teens and the three New Hampshire pre-teens for whatever the game du jour was. Often this was kickball. Sometimes the grownups weren’t sure what was happening, but it was fun to watch.

When the Texas cousins arrived soon after the California contingent had departed, a whole new gaggle of kids took to playing made up games or some variation of soccer – played barefoot and usually with the littlest kids tending the goal – or hide-and-seek or capture the flag. They must have run miles all those evenings, across my in-laws’ wide lawn, oblivious to the glorious mountain views beyond them, just focused on the game.

When they play on their own, kids get to make up the rules – and they have to referee themselves. Generally, they figure it out relatively peacefully. But my kids – and others – can be uber competitive: sometimes there are squabbles. Sometimes someone stomps away in frustration, but that someone always ends up back in the mix eventually. Nobody wants to miss out on the fun for long.

A couple of weeks ago, when the out-of-town cousins were all long gone, I was finishing up the dinner dishes when I saw my older daughter run out of the garage with a pair of clippers and a metal rake. Sitting on the front porch with my husband a few minutes later, I watched the kids far up in the front field, moving around by one of the large maple trees there.

Eventually, the two girls careened partway down the driveway on bikes, dismounted to grab a couple of large-ish birch branches fallen nearby, and lugged them all the way back up to the maple tree. As we watched the kids move around near the tree, into and out of the woods nearby, we wondered what on earth they were doing.

We agreed, though, that it didn’t really matter. They were outside. They were working together instead of arguing (which, believe it or not, happens a fair amount). They were using their brains and their bodies. We let them be until the gathering darkness made it hard to see them, then called them in for bedtime.

They were building a fort, they said, and they continued the mission the following day before moving on to the next spontaneous, unstructured summer thing.

This week’s impromptu, hours-long, into-the-dark wiffleball game came after three of the four kids playing had spent a full morning at middle school orientation and two more hours at soccer practice. It came in the waning days of summer – and, perhaps (as much as I hate to admit it), in the waning days of childhood.

It seemed unimportant that it was late and that it was fully dark outside. Next week brings the start of the school year and the return to more structure – classes, sports, homework – another year in the march toward adulthood.

For this late-summer night, I wanted to let them play as long as they could.

August sneaks up on me every year. In June, summer stretches before me like an endless daydream of carefree days, family adventures, sunshine and warmth. Then, suddenly, it’s August, and it feels like summer is coming to a screeching halt before it’s really even begun. 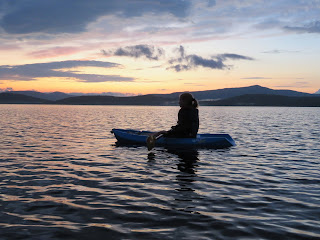 This summer has seemed to pass particularly quickly. It feels a bit like one of those days where you get to the end of it, flustered and exhausted, and wonder what the heck you did all day. But once you’ve had time to sit and reflect, you realize there was a lot packed into the day – or, in this case, the season.

During the first month of summer we had a revolving cast of visiting cousins in town, which made for days – and nights – that were fun, to be sure, but also sometimes hectic and amorphous. We loved the quality cousin time, but never really got into our own summer swing of things.

For the first time since the kids were toddlers, we also didn’t take our annual week-long pilgrimage to the ocean. We’ve had lots of shorter adventures that have all been a blast, but without that week of beach time marked on the calendar, summer has seemed a little off, I guess.

And don’t even get me started on the garden. Oof. Busy June weekends, on top of some pretty miserable early summer weather, thwarted all my good intentions of getting the vegetable gardens planted early. The perennial bed is a disgraceful tangle of weeds with the occasional sturdy bloom poking through.

Still, my flower boxes are overflowing with color. And the small plots I managed to sow – late as it was – with veggie seeds are producing well, keeping us in beans and carrots, cukes and zucchini, beets and more kale than I know what to do with. It all makes me think it’s simply time to cut back on the size of both gardens for a while.

Despite missing our Cape week – and the fact that it took us to the end of July to get to our first big hike of the summer – the adventures we have had have been fabulous. We’ve gone glamping and mountain biking, camping and kayaking, climbed a few tall mountains and splashed in our favorite spots along cool rivers. I’m still holding out for a few days at the ocean – and a few more hikes, bike rides, and trips to the pool and the river.

I guess that’s the upside of August hitting so hard – realizing summer isn’t really forever, and that it’s wise to fit as much of its goodness in before the days shorten too much more, before the kids are swallowed up back into the school year, before we move on – ready or not – to the next season.