My friend Amy lost her mom this spring. I’ve known Amy since we were about 10 years old, zooming around the slopes of Cannon Mountain. And so I’d known her mother since then, too. Tina – or T, as we all call her – was a force in everything she did. She could organize a ski race, win a golf tournament, host a good party, zip through steep powder runs out west or firm and fast ones at home, and orchestrate a family outing to the beach without breaking a sweat.


So we all figured that if anyone could beat cancer, it would be T. She put up a heck of a fight, but in the end, not even T’s tenacious determination was enough to overcome the constant assault on her body.

I am vastly lucky to have parents who have stood by my side when I’ve needed it and watched from afar when I didn’t. But I am also blessed to have grown up with this network of other parents, the parents of my oldest friends. These other moms and dads have been there throughout my childhood and beyond – to pick me up when I crashed on the ski slope or the sidewalk, or needed a hug or some sound advice on the rare occasion that my own folks weren’t immediately available.

T was one of these, a surrogate parent. Besides being the mother of one of my best forever friends, T was also one of my own mother’s best friends. The fabric of our families is woven together through many years and experiences. This week we will gather in Maine, by the rocky coast that T loved, to remember her together.

For all the good things there are about growing up, growing older, there remains the one dismal, terrifying fact that at some point, some of the people you love the most are going to die. And you will have to figure out how to carry on without them.

This hit home hard a couple of years ago when my normally healthy-as-a-horse father suddenly needed open-heart surgery to fix a faulty aortic valve. As the day of his surgery approached, I had to focus nearly constantly to swallow the panic rising in my throat, as I was forced to face the impossibility that my parents are not invincible, that someday I will be here and they will not.

Dad came through fine and has resumed his normal activities of skiing in the winter, golfing in the summer, and goofing around with the grandkids year-round. And so I have been able to push the panic into the far corners of my psyche, but it is still there.

I think for Amy and her family, that panic has been mercurial. First there was dread. Then hope, as different treatments seemed to hold the cancer at bay, if not altogether diminish it. And finally the gradual acceptance that we are all, eventually, helpless in the face of death.

When Amy called to tell me T had died, she sounded steady and calm. I, on the other hand, didn’t trust myself to say much, afraid the mere act of speaking would reduce me to blubbering. I was sad for my friend, who was as close to her mother as anyone I know, and for her family. That was part of it. But I could also feel my own panic rising as I imagined how Amy must feel, even after months of knowing this day was coming, to be without her mother.

So much of who we are is tied up in who our parents are. Who will we be when they are gone? Who will we call when we have a question about a recipe or that funny noise coming from the furnace or the name of that place we used to go every summer when we were kids? Who will remind us that we used to pick dandelions and climb trees and sport perpetually scraped knees just the way our children do now? Who will remember who we were before we grew up and became who we are?

Our parents’ story is our story, and the story of the generations before them, and the story of our own children. When our parents are gone, the story becomes ours to tell, to continue, to pass on. That sometimes seems like a great burden to bear, if only because we want to make sure we get it right.

Our stories extend beyond the boundaries of family ties, to the other people with whom we have shared experiences and memories. From childhood sleepovers and chilly ski races to wedding celebrations and shared margaritas, T is a part of so many of my memories. Now Amy’s children and mine are collecting their own experiences, shaping their own chapters to add to the collective memory.

And so, somehow, life goes on. The story continues.

Original content by Meghan McCarthyMcPhaul, posted to her Blog: Writings from a full life. This essay also appears as Meghan's Close to Home column in the Littleton Record.
Posted by Meghan McCarthy McPhaul at 6:00 AM No comments:

Spring rains drove the earthworms above ground one morning last week. This nearly caused us to be late to school, as the kids exclaimed over the sheer number of worms in the driveway, studied their thin, squiggly tracks through the sandy surface, and gently relocated several of them to the gardens. 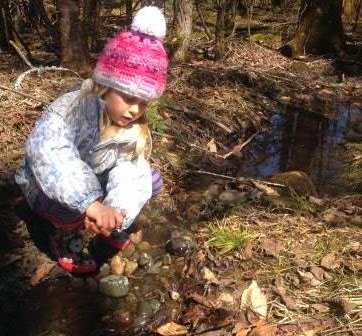 The worms, and why they were out of their worm tunnels, were the topic of conversation all the way to school that morning – and a reminder of how little it takes to inspire wonder in the hearts and minds of children.

As a natural question asker, I like to think that I’m always striving to learn, to ponder, to look for answers. But there is something magical about the wonder of a child that even a robust adult curiosity can’t match. Often, adults are content to know what we know. Or perhaps we are too busy thinking of work and home and family logistics to follow the wandering trail of wonder very far. Sometimes we are moving too fast to notice the small things, or we contemplate a question only briefly before becoming distracted by some more pressing matter.

Children, though, are endlessly curious. They will ask, “Why?” and, “How?” until they reach some satisfactory conclusion. For them, it is completely natural to spend hours figuring out how to shore up the building-of-the-day in the sandbox, or construct sandy canals on a seashore beach, adjusting plans as the waves move water in and out.

Children are more willing than adults to pause along a favorite hike and admire the pink lady slippers hidden in the shade beside the trail. They examine and admire ordinary rocks, noticing the textures and colors and shapes. They wonder about the moles that leave mounds in the front lawn, rather than finding them a simple nuisance. They thoughtfully watch ants moving about their dirt domains, bees buzzing in flowers, and caterpillars creeping along leaves.

Since my children have been old enough to crawl through the grass, then walk through the woods, I have found my own sense of childish wonder revived as we explore our small piece of the world. As they grow older, the kids’ questions become more detailed, and we look for the answers together, leafing through field guides about birds and trees and butterflies, or turning to the Internet to identify a flower, learn more about our resident garden toads, or find out what the fox really says.

From the chairlift in winter, we wonder what animal made the tracks in the freshly groomed snow below. As we wander through the awakening landscape of spring, we notice all sorts of leaves growing on the forest floor and wonder which wildflower will bloom first – and where trout lilies and bloodroot got their names. During summer days at the beach, we watch hermit crabs scamper through tidal pools and wonder about all the other creatures living beyond the shore, far out in the vast ocean.

Whether it is the first pea shoot growing through the garden dirt in the springtime, the 100th woolly bear caterpillar migrating in the fall, or the back-and-forth calls of our neighborhood barred owls, each discovery is brimming with the promise of new things to learn, new wonders to discover.

Amidst my children’s easy enthusiasm at even ordinary sights and sounds, I am inspired to look more closely at the small details, to take note of the exact colors of the sunrise and the delicate shape of an individual snowflake, to crouch down in search of the Jack-in-the-pulpit growing secretly beneath the rose hedge, to welcome the first song of spring peepers and the return of butterflies to the garden. My inner child awakens to reclaim the wonder.

Original content by Meghan McCarthyMcPhaul, posted to her Blog: Writings from a full life. This essay also appears as Meghan's Close to Home column in the Littleton Record.

Posted by Meghan McCarthy McPhaul at 6:19 AM No comments: