Paralympian and all-around bad ass athlete Tyler Walker (and teammate Laurie Stephens) climbed the Mt. Washington Auto Road in wheelchairs yesterday as part of the Adaptive Sports Partners of the North Country's annual Sunrise Ascent fundraiser. In honor of the event, here's a story of the first wheelchair ascent, from the August 13, 2005 Caledonian-Record. 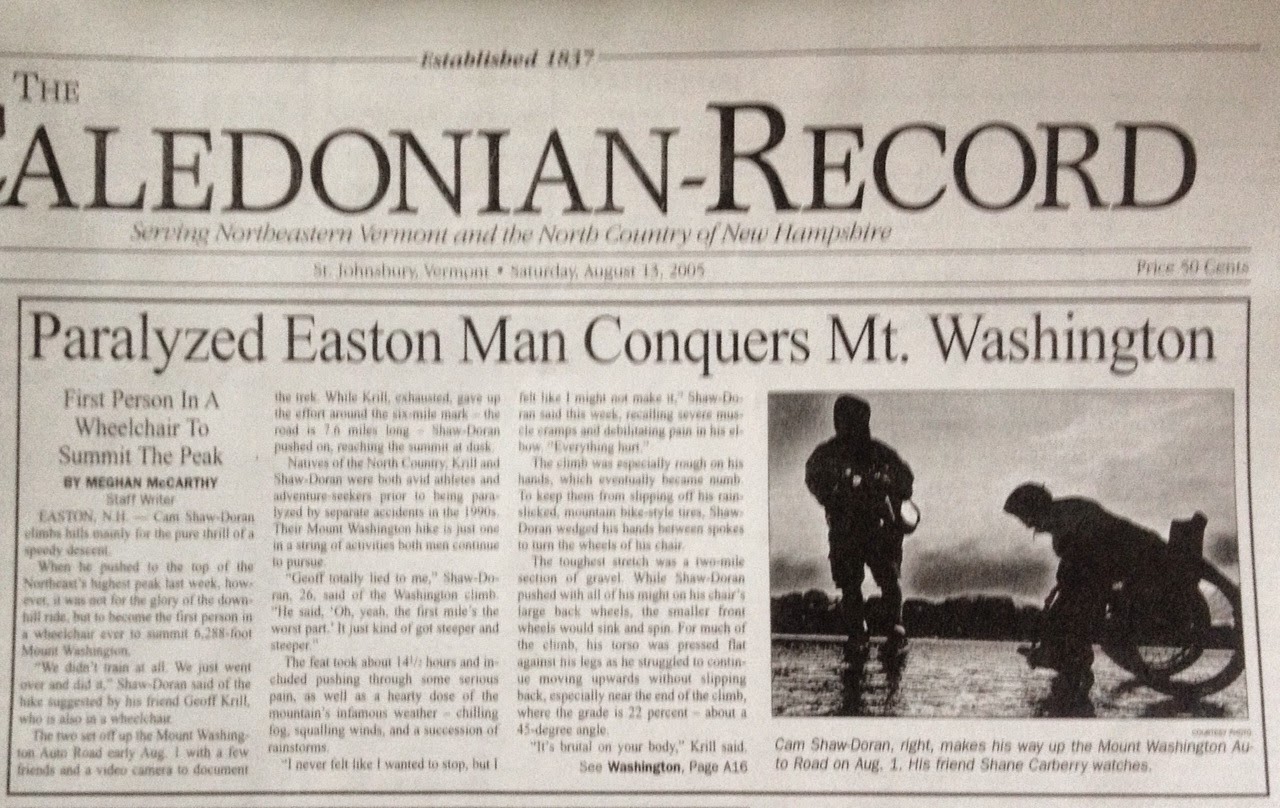 
Staff Writer
Cam Shaw-Doran climbs hills mainly for the pure thrill of a speedy descent.
When he pushed to the top of the northeast’s highest peak last week, however, it was not for the glory of the downhill ride, but to become the first person in a wheelchair ever to summit 6,288-foot Mount Washington.
“We didn’t train at all. We just went over and did it,” Shaw-Doran said of the hike suggested by his friend Geoff Krill, who is also in a wheelchair.
The two set off up the Mount Washington Auto Road early Aug. 1 with a few friends and a video camera to document the trek. While Krill, exhausted, gave up the effort around the six mile mark – the road is 7.6 miles long – Shaw-Doran pushed on, reaching the summit at dusk.
Natives of the North Country, Krill and Shaw-Doran were both avid athletes and adventure-seekers prior to being paralyzed by separate accidents in the 1990s. Their Mount Washington hike is just one in a string of activities both men continue to pursue.
“Geoff totally lied to me,” Shaw-Doran, 26, said of the Washington climb. “He said, ‘Oh, yeah, the first mile’s the worst part.’ It just kind of got steeper and steeper.”
The feat took about 14 and a half hours and included pushing through some serious pain, as well as a hearty dose of the mountain’s infamous weather – chilling fog, squalling winds, and a succession of rain storms.
“I never felt like I wanted to stop, but I felt like I might not make it,” Shaw-Doran said this week, recalling severe muscle cramps and debilitating pain in his elbow. “Everything hurt.”
The climb was especially rough on his hands, which eventually became numb. To keep them from slipping off his rain-slicked, mountain bike-style tires, Shaw-Doran wedged his hands between spokes to turn the wheels of his chair.
The toughest stretch was a two-mile section of gravel. While Shaw-Doran pushed with all of his might on his chair’s large back wheels, the smaller front wheels would sink and spin. For much of the climb, his torso was pressed flat against his legs as he struggled to continue moving upwards without slipping back, especially near the end of the climb, where the grade is 22 percent – about a 45 degree angle.
“It’s brutal on your body,” Krill said. “It’s a great experience, but it’s not something that you’d want to do all the time.”
Krill, who has climbed other mountains on hiking trails in what he described as a team effort, said Washington was not on his peak-bagging to-do list, mainly because much of the route is paved. The motivation for the climb came at the end of June with a newspaper report that a man from Pennsylvania had tried unsuccessfully to reach the top of the mountain in a wheelchair.
When he realized no one in a wheelchair had ever summited Washington, Krill asked Shaw-Doran if he was up to the challenge.
“It’s our home state, and that’s the kind of thing we do around here,” Krill said. “It just made sense.”
While Krill did not reach the summit last week – he was bogged down by a 45-pound chair he said sapped his strength – he encouraged Shaw-Doran to keep pushing to get there.
“One of us had to make it up there,” Krill said. “You don’t go through this much effort and not make it.”

Against the grain
Shaw-Doran lives in Easton with world ski champion and lifelong friend Bode Miller in a house tucked behind the Tamarack Tennis Camp run by Miller’s family. The house has been dubbed “Cam-Bode-a” (pronounced: Cambodia) by some friends.
Before the car accident seven years ago that left Shaw-Doran’s legs paralyzed, he was an avid snowboarder. While the accident robbed Shaw-Doran of the use of his lower limbs, however, it has done little to diminish his playfully rebellious side.
In the first big air snowboarding contest Shaw-Doran entered as a kid, he was disqualified for doing a backwards inversion. Despite the disqualification, his jump – which he said he landed cleanly – was a big hit with spectators.
Shaw-Doran said it took him a year after the accident – six months of which were spent in the hospital – to be able to get around on his own. Gradually, he started hand-cycling, then skiing with a mono-ski – a bucket chair that rides on a single ski.
Now, he said, he can rip turns on any mountain in the winter and puts in 1,000 miles or more on his bike every summer. He’s a common sight along Easton Valley Road, arms pumping, chest heaving, as he works to spin the wheels and propel his bike along the pavement.
He’s also a student at Plymouth State University, where he’s working toward a degree in business.
Krill, who taught him how to ski with the mono-ski, said it took a little while to convince Shaw-Doran to get active again. Now the two spend a lot of time skiing and biking together.
“Life’s pretty cool in a wheelchair, and he’s figured that out,” said Krill, who was paralyzed in a snowmobile accident 10 years ago.
Krill is now the winter sports coordinator at the Loon Mountain adaptive ski program, where he teaches others who are wheelchair-bound that there’s plenty of fun to be had in the arena of the White Mountains.
Krill is also the first person to mono-ski Mount Washington’s legendary Tuckerman Ravine, a feat he accomplished this March.
Shaw-Doran has also figured out how to get going really fast on his bike. That love of speed – and his tendency to go confidently a little bit against the grain – is something he shares with Miller, who may be the fastest guy on the mountain on any given day, but is unlikely to show too much semblance of traditional form.
Shaw-Doran said the fastest he’s ever gone on his bike – about 60 miles-per-hour – was coming down Three Mile Hill in Franconia.
“I was kind of cheating,” he admitted. “Because I was drafting Bode in his Porsche.”

Inspiring others
Krill and Shaw-Doran both said they don’t have much desire to climb Mount Washington again. Krill would rather hike in his modified mountain chair, which has two long poles at the front – instead of the standard small front wheels – in what he described as a rickshaw style that allows other hikers to help pull him through river crossings and over boulders.
“There’s a lot of other things I would do before [hiking Washington],” Krill said. “I would rather go to places that are a little bit more pristine – I guess paths less traveled.”
Shaw-Doran would rather be out on the road with his hand-cycle or on a snowy mountain with his ski.
“I think I’ll bike across the United States,” Shaw-Doran said when asked what his next adventure would be. “That’s just an idea. I’ve always wanted to do it.”
Krill is game, and the two may embark on that long journey next summer, he said, if they can find the time and the sponsorship money to do it.
If they go, Krill said, he’d like the expedition to include visiting rehabilitation hospitals along the way. He hopes to carry a variety of sports gear to demonstrate to others in wheelchairs the vast possibilities for athletic and recreational activities.
“They just don’t realize what’s out there,” he said. “They need to see people doing it, who are active in it, to understand.”
While Krill said he and Shaw-Doran didn’t want any media attention prior to the Washington hike, because it would have taken away from their enjoyment of it, he said rousing others into action was one of his prime motivating factors.
“It’s great for the attention afterwards, because maybe it’ll inspire someone else in a chair,” Krill said.
Inspiration seems to be all in a day’s work – or a day’s play – for Krill.
“I would have never, ever gone or tried or made it without Geoff. I wish he could have been there with me,” Shaw-Doran said of his successful summit of the mountain. Then, with a grin, Shaw-Doran remembered that Krill has already achieved his own first on Washington: the mono-ski run down Tuck’s.
“He owns the other side of the mountain,” Shaw-Doran said.
Posted by Meghan McCarthy McPhaul at 1:54 PM