Earlier this week I spent a couple of hours playing elf at the local elementary school’s annual Recycle Sale. Each year, every child in the school gets to peruse a hodgepodge of new and used items and select holiday gifts for immediate family members, all for the price of a quarter per present. The kids look forward to the sale each year, and for the past nine years, I’ve been lucky enough to be there on Recycle Sale day to help wrap the treasures they find. 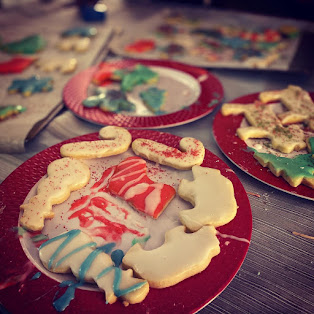 This has been a favorite holiday tradition for my children. We sort of figured it wouldn’t happen this year, given the pandemic and all. But the staff and volunteers figured out a way to make the sale work. I’m particularly glad, since this is my family’s last Recycle Sale; next year I will no longer have elementary school-aged kids.

Of course, we’ll have to shift or do without lots of traditions this year. There was, for instance, no holiday school concert this December. But I’ll long remember my children’s first, when my now-8th graders were in kindergarten and happily hopped around on stage doing the Penguin Polka. (I can still sing that song, so often did they practice it at home!)

We won’t have our annual sit-down dinner and present-opening extravaganza at my parents’ house on Christmas Eve. Instead, we’ll settle for an abbreviated visit, all of us spread out across the long room, rather than gathered together at the dining room table. I feel lucky to be able to do that, different as it may seem, given that many people won’t see their loved ones at all this Christmas. Likewise, what has become a tradition of Christmas morning brunch and more presents at my in-laws’ will likely be considerably more subdued this year.

Since my kids were babies, we’ve always hosted Christmas dinner for extended family on both sides, cramming borrowed chairs around two tables pushed together. There’s not a lot of elbow room at those tables once everyone sits down, but the house is filled with good food, conversation, discarded wrapping paper, and plenty of love. It will seem strange to have Christmas dinner with just the five of us, at our regular table, without the noise and bustle of nearly a dozen extra people.

But there are some things that will be the same. We’ll still make a mess of the kitchen while baking and decorating Christmas cookies. The kids and I will still sit together on the couch before bedtime on Christmas Eve to read ’Twas the Night Before Christmas. They no longer fit in my lap or believe in flying reindeer that land on the roof with “The prancing and pawing of each little hoof,” but reading Clement Clarke Moore’s poem set to Jan Brett’s whimsical illustrations remains a night before Christmas must.

On Christmas morning, the kids will still be up earlier than the grownups would like. And I’ll still make them sit on the top step for a photo before they come down to check out their presents. They know, now, who really brings those presents, so there’s less magic in that moment, perhaps, than there once was – but just as much joyful anticipation. While so much looks different this year – and this Christmas – I’m thankful and grateful for all that remains the same.

Posted by Meghan McCarthy McPhaul at 7:20 PM No comments:

A few inches of snow. That’s what it took to adjust my attitude toward winter this year. For as long as I can remember, I have loved this season of white – it’s filled with Christmas magic and snowy woods and skiing. But this December, I just wasn’t feeling it. 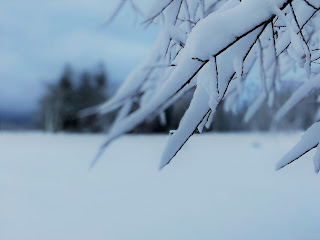 This year, I held tighter than ever to summer, lamenting its passing in a way I never had. Summer had provided a bit of a respite from the pandemic, as we spent the long days mostly outside and often with friends – hiking and splashing in the river or just sitting together. Here in the more northern realm of New England, it felt as if we were in a germ-free bubble of safety. Autumn arrived with colors as brilliant as ever, but also with the kids returning to school, less opportunity to gather (safely, outdoors) with friends, shorter days and continued uncertainty.

While visions of powder days and wintery wonderlands normally fill my head once the leaves drop from the trees, this winter took shape in my mind as an endless stretch of cold, dark days. Even the thought of skiing didn’t excite me. I couldn’t – and still can’t – picture a ski season without the banter of the coaches’ room in Ernie’s Haus, the young kids I coach sharing candy at snack time, my own kids goofing around with their friends and sitting shoulder-to-shoulder at lunchtime.

Rather than bemoaning the lack of snow, as I would normally do, I reveled in the warm weather that lingered into this strange December, in long walks through the woods, and in the extra time of unexpected free weekends due to a delayed start to the season. It didn’t feel like December or ski season or Christmastime. It felt like endless November, and despite my normal disdain for that month, this year I didn’t mind.

But Saturday afternoon, the steady drizzle turned to snow, and Sunday morning, we woke up to a landscape transformed to white. The tree limbs, long bare of leaves, were sheathed in snow. The mountains were covered. The plows once again prowled the back roads near home.

My son pulled the old toboggan out of the depths of the garage and we trudged through the snow to my folks’ house to visit (outside) and help with the shoveling. After lunch, we rallied some friends and a cousin, and the kids spent a couple of hours tramping up, then sliding down the long hill of my in-laws’ yard.

It was an afternoon of laughter and rosy cheeks and snowballs lobbed at passing sledders. It felt almost normal. It felt good.

Back home, the lights of the recently-trimmed Christmas tree twinkled against the early dusk outside. Our familiar hodgepodge of holiday decorations occupied their regular December spots along windowsills and across the mantle. The skis, hauled out of their summer storage place just the day before, were waxed and ready – for whatever this season will look like.

It still doesn’t feel like all is right in our little piece of the world, and maybe it won’t for some time. Our anticipation of the season is tinged, in this year of 2020, with anxiety. But a little bit of snow went a long way to remind me that I really do love this season – and had me embracing winter again, at last.

Posted by Meghan McCarthy McPhaul at 5:25 PM No comments: