Winter Worth the Wait

Winter was late in coming this year. The week after Christmas (when it rained), I was still walking through the snowless woods in low boots, and we were only skiing thanks to the wonder of manmade snow. We haven’t really had a big storm yet this season, but the woods – behind our house and on the mountain – have slowly filled with snow. Many days over the past two weeks, I’ve looked up from my desk to see it snowing on the other side of the window – sometimes big, fluffy flakes swirling casually toward the ground, sometimes a fast-falling wall of white. 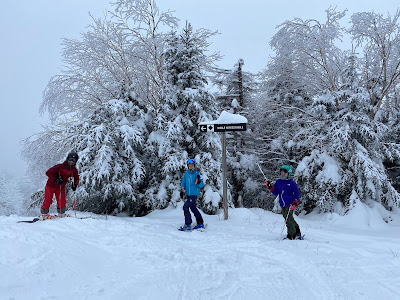 To someone who loves skiing, all those snowflakes are really distracting.


Skiing on weekends is a given in our house. But twice in the past week or so, I’ve loaded skis into the car on weekday afternoons and chucked the kids’ boot bags in on top of the skis. One of these outings was pre-planned and involved springing the youngest from school a little early. (I’ve called family powder days on occasion in the past, and since we live in a place where lots of people – including the principals at both schools – are skiers, I just straight up tell them we’re going skiing. Or I say we’re working on “outdoor education,” but they know what that means. And we’ve never been scolded.)

Tuesday, every time I glanced up from the keyboard, it was snowing. I had planned to just take the dog for a ski through the woods between meetings and other work tasks, but when I went out to run an errand mid-day, I brushed a couple of inches of fluff off the car, and then it snowed a good bit more. My two 8th graders were at the mountain that afternoon for ski team practice. A friend sent a photo of a glade filled with fluffy, untracked powder. My distraction level was high.

So, I did what any ski-loving girl with a little scheduling flexibility would do. I donned my ski bibs, tossed my skis and my daughter’s into the minivan, and we headed up Three Mile Hill to the Mittersill Double straight from school pickup. There was hardly anyone on the hill, and we found plenty of untracked snow, even late in the afternoon. It was a sweet hour and a half on the slopes. Just the right number of runs to adjust my attitude, the break I needed to focus back on the work left to do at home.

Winter was late in coming this year, but it was worth the wait.