It took going to college in the rolling hills of central New York state for me to realize I am, at heart, a mountain girl. Although I’d spent countless hours of my childhood hiking up mountains in the summer and skiing down them through the winter, I’d always taken those mountains for granted. So when I landed in a mountainless landscape, it didn’t take long to realize there was something critical missing from my life. 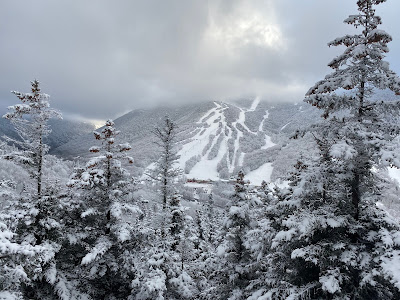 There are lessons to be learned in the mountains. Patience. Perseverance. A deep love of beautiful things – and the rugged power that is often hidden by that beauty. And the lesson of taking the good – good snow, good weather, good times with loved ones or alone – when you can get it.

I spend lots of time in winter on the mountains, namely on one: Cannon Mountain. It is the one with which I am most familiar. The one where I have spent the most time. It is not the only mountain I have loved, but it is the one that most feels like home.

Last weekend I took a few solo ski runs, after fulfilling my coaching duties for the day and before I had to return to the tasks that awaited me at home. At one point I paused, between chairlift ride and skiing descent, to watch four ravens play on the wind. They floated up, drifting this way, then that, just gliding above the trees and the humans sliding below them on the snow.

The wind was from the south, which rarely means good things for the skiing at Cannon. But the ravens didn’t seem to care. They take whatever wind they find, I guess.

That south wind was part of the reason I’d decided to stick around for a few more runs Sunday. Winds howling through Franconia Notch from the south in December typically bring warm, wet weather. The skiing was fabulous Sunday, had been great for the first few weeks of the season, and I wanted a few more laps on the all-natural stuff before whatever that south wind carried watered it all down.

In the mountains, the lines between seasons are not so definitive as they are in lower realms. I have been buffeted by icy summer winds at the top of Mount Jefferson, when the sun shone calmly at the trailhead. I’ve been knocked around by tremendous gusts and pelted by freezing rain in August on Mount Adams. I’ve hiked through October snow to reach Lonesome Lake.

I’ve watched an impossibly long sunset linger across distant peaks from just below the summit of Mount Washington (only hours – and many miles – after being caught in that Mount Adams cloud). I’ve seen a magical show of sun halos and pillars and glittering diamond dust in the December sky above Cannon. And I’ve skied mid-April powder on the mountain while crocus shoots push through the dirt in my yard not far away.

Last weekend the snow and ice were so thick and white on the stunted evergreens near the summit of Cannon that the kids I coach decided the forest looked like an army of yetis. To me it seemed like some fantastical wonderland. That is how I often feel in and on the mountains – as if it’s too astoundingly beautiful to be real. Mountains can be breathtakingly beautiful from afar, but nothing compares to standing on a high summit as the world goes on below.

I’ve had some challenging moments in the mountains, and some that have scared me, too. But it’s the magical ones that bring me back again and again, whether it’s toiling for hours to reach a summit by foot or riding a chairlift for the easy thrill of gliding back down.