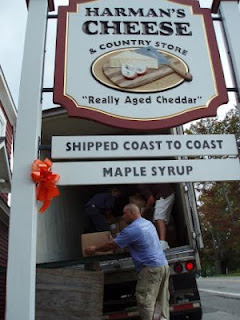 The folks who gathered to unload the cheese were all volunteers, and willing ones. Their payment for a couple hours of hard work? The satisfaction of helping a good neighbor with a tough job – and a block of the World’s Greatest Cheddar Cheese, of course.
Posted by Meghan McCarthy McPhaul at 6:21 AM