The light is changing, as it does each year when summer reaches towards fall. 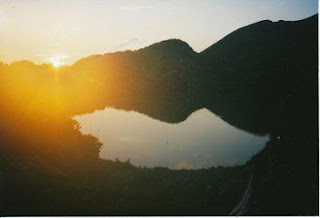 In June, we welcome the light as it brightens, sharp sunshine that shimmers with heat and long days and summer plans. In July, it seems the brightness will last forever. And then, suddenly it always seems, it is late August. The dark of night seeps into each day a bit earlier. The sunlight is still strong, but somehow not as energetic as it was a week or two ago. The light is changing.

The first time I really noticed the alteration of late summer light I was on my mountain bike in Colorado, returning to town from a single track ride south of Crested Butte. The light was still bright, but seemed more golden than white as it sifted through the mountains onto the open valley floor. The air was heavy with autumnal hues, even as the grass and sage around us held fast to their summer green. It was almost magical, that light in the mountains, and a sure sign that summer was waning.

There was another ride there, near to my front door, short and mellow, and so a favorite for after-work evening jaunts. This trail looped along a river valley, through patches of aspen trees. A friend dubbed it the yellow room in the in-between season of almost-fall. There was the sweet mustiness then that comes with decaying leaves and cooler nights. The sun sank low over town, through the aspens, their leaves rustling and gilded. The air itself seemed golden there, as the late day, late season sunshine reflected from the winding river like a long, amber ribbon.

The landscape is less open here, in the mountains of New Hampshire, and so the change in light not quite as palpable. But the light is changing. Already we notice the darkness edging in just after dinnertime, the sun lazy in its morning rise, the nights cooler than we are, perhaps, ready to accept.

School starts next week, which means it’s fall, even if we’re still weeks away from Equinox. The ferns in the field have browned. The dense canopy of forest on the mountains, seen from afar, is already dulling from bright green toward muted gold as the leaves start their annual transition to red and yellow and russet.

It is a blessing to live in a place of seasonal changes, to be surprised so often by the signals of the changing seasons, even as we know they’re coming. It is hard to let go of the warmth and light and freedom of summer. This year, particularly, it seems I am not ready for the changes that come with fall: from calm mornings and unscheduled days to school routines and regimented hours, from heat and light to frost on the grass and dark evenings.

Perhaps we’ll squeeze in a little more pool time after school hours, savor a few more popsicles, dig our toes into the sun-warmed sand. But the signs are there; summer is on its way out. The light is changing. I will bask in its golden glow for as long as I can.

Posted by Meghan McCarthy McPhaul at 6:57 AM