A Season Not Lost

Soccer season, like so many other things over the past seven months, did not go quite as planned this year. On the day that would have, in a non-pandemic world, held the annual Halloween Cup, we woke up to four inches of heavy wet snow, with more falling fast. I guess the silver lining is that we didn’t need to worry about cancelling due to bad weather and slick roads, since Covid had already canceled the event for us. 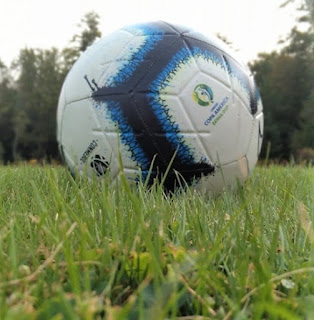 In the grand scheme of things, whether kids get to play soccer or not may seem trivial. But any semblance of normal these days is a big deal for them – for all of us, really.

For most of the summer, we weren’t sure if the kids – high school, middle school, kindergarten – would get a soccer season at all. While my older children have had something like a regular season in middle school, my 6th grader’s team (which I coached with a friend) was restricted to practices and intra-squad scrimmages. No games against other towns. No joyfully-past-their-bedtime Under the Lights tourney in Littleton. No Haverhill Cup.

But for a few hours each week the kids were on the field, together, kicking the ball around and learning the game a little bit better. Two days a week, they made their way through stretching and wind sprints, skills work and tactical talks, all without the potential reward of earning a W or raising a trophy. They listened and worked hard. And out there on our home field, we all smiled. A lot.

In this year of so much weirdness, I think soccer was a happy highlight for the kids. I know it was for me.

One player showed up to the first few practices in a cast-like boot to protect a still-healing broken foot. He did as much as he could, so hampered, then jumped in full steam as soon as the doc cleared him to lose the boot. Another kid arrived one day complaining, in a charmingly happy manner, that he hadn’t had time after school to change out of his restrictive “school picture day shorts.” A few of them boogied mid-scrimmage one afternoon to music playing from a nearby field. Once, a quick, furious downpour left the kids soaked – and scrimmaging under a brilliant double rainbow.

At different times throughout the season, my daughter and I lamented some of the differences of this year compared to other soccer seasons. She missed the challenge of competitions, the power of playing good defense, the thrill of scoring goals. I missed thinking about which lineup would work best on any given day and watching the kids figure out this “beautiful game” little by little.

Last October, her team made it to the Halloween Cup final only to watch the opposing team’s players lift the candy-filled cup at the end of the day. It was my third time in five Halloween Cups coaching a runners-up team. Maybe next year, I told my daughter then. This year’s tournament would have been her final Halloween Cup, and mine, too.

Alas, this October there would be no penalty kick shootouts and dedicated fans, no games played just after dawn and just before dark, no triumphant wins and disappointing losses. This October, there was no gathering of teams from throughout the region, no gaggles of kids running around the Dow and swinging through the playground between games, no concession stand stocked with baked goods and crockpots of warm food, endless pots of coffee and countless volunteers.

Instead, our season finale was just 15 kids and two coaches who love soccer, on the field together. We ended the season with a long scrimmage session. The kids passed the ball and made some moves and scored a few goals. They took some hard knocks and helped each other up. There was less intensity than the normal end-of-the-season competition, but more laughter.

Probably, if someone asked, I’d say I wish it had been a normal soccer season. I wish these kids who are moving on to middle school next year had their chance to be the big kids on the small field. I wish I’d gotten to coach them through one more tournament. But in a year that has often involved seeking out silver linings, we still managed to find plenty of them on the soccer field.

Posted by Meghan McCarthy McPhaul at 6:18 AM