It’s that time of year when I turn the defroster on in the car in the morning and shift to the AC in the afternoon. The snowpack is receding to reveal green shoots of crocuses and daffodils pushing through half-frozen dirt. And the chickadees are singing longer and louder, with other birds adding their voices to the soundscape outside. 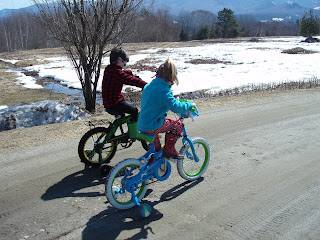 Ah, springtime. Just a friendly reminder, though, that we’re likely in for more winter before spring really sets in.

It’s a rare – maybe nonexistent – occurrence that one New England season simple ends and the next slides smoothly into place. I’m guessing there will be some more give and take between winter and spring – more cold wind, more blowing snow, more bundling up into layers – before the warmer, greener season really takes hold. But the transformation has begun.

Last week, the Connecticut River, where I cross over it from Thetford into Lyme on my way to the office, was a wide, smooth swath of silver-white. This week it’s melted out to a sleek ribbon of cold slate. Where snow covered the perennial bed just a few days ago, now the newly-exposed leaves are greening in the March sunshine, a first step toward summer blooms. Sap buckets hang from sugar maples, and the dog has taken her first dip of the year in an ice-free Bowen Brook.

The kids and I spent all of last weekend at ski races, where the spectators basked in the warm temperatures, and freckles sprouted on noses and cheeks. After school early this week, the kids changed into shorts and headed into the yard with a soccer ball. And so we find ourselves, again, in an in-between place, where mud and snow mingle in the yard, and ski boots and snow pants share space with flipflops and cleats near the front door.

This transitionary time is not always pretty. Tired snowbanks are melting away to reveal a winter’s worth of detritus. (And each year, I wonder who on earth drinks so many cans of bad beer before tossing the empties out the window.) Frost heaves mar the backroads I travel. People and pup track mud everywhere. Without a blanket of white, and before the pastel hues of spring paint the landscape, the most common color there could be considered “blah brown.”

But there is a hopeful sweetness to this shifting of seasons, too. I’m anticipating more days of sweet spring skiing peppering the earliest weeks of soccer practice. I’m starting to think about the garden and which vegetables to grow (or try to, at least) this year. And I wholeheartedly welcome the light of lengthening days.

There is still some snow to come, I’m sure, and cold. At some point, probably soon, I’ll have to don the extra layers again, at least for a while. But these sunny March days are a reminder that spring is on its way, meandering though it may be.