Summer’s arrival was tardy this year, kept at bay by the cold and wet of a lingering spring. But the season of heat and color is here, at last, and the delay has made these first hot days – and the gifts they offer – even more welcome. 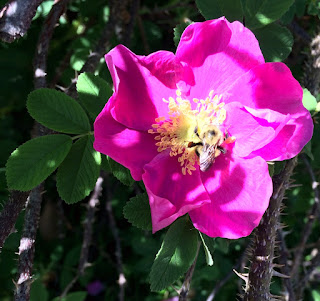 After so many long weeks of waiting, as spring’s lilacs fade away and summer’s roses bloom, the blessings of this season seem many.

Fields of lupines flow in a sea of purple from the house toward the woods on one side and the mountains on another. Though they were late to bloom this year – like everything else – this June has brought more lupines than I’ve seen in our fields in years. I guess they, at least, liked the chilly, wet spring.

One afternoon, as I walked through the mowed path in search of a lupine photo, our neighbor called to me that one group of the local bears was out. After grabbing the dog by her leash-less collar and getting her safely inside the house, I spent a good chunk of time observing mama bear as she kept watch by the base of a giant white pine. Her three small cubs scampered high up the tree – 30 feet or more – and spread out along one long limb to nap, one curled up where the branch met the trunk, the other two sprawled along the branch, their fuzzy legs dangling toward the ground, heads on a pillow of scratchy bark.

Beyond the excitement of bears, when I pause outside, I hear the buzzing of bees and of hummingbird wings, where they hover to feed on the flowers we have planted on the porch.

Buttercups, like fields of gold, have turned whole swaths the landscape into its own form of sunshine.

The very air is sweetness, with its mingling scents of roses and sunscreen and freshly-cut grass. And the light now lingers long past dinnertime, inspiring the kids to go out and play later than usual.

We have taken family drives through the protracted twilight and seen other bears in other fields and summer-sleek deer, shed now of their duller winter coats, gleaming deep amber in the fading light. One night we were happy to spot a yearling moose not far from home, all elongated snout and gangly-long legs as he lumbered clumsily along the road in front of us before turning into a field of wildflowers abloom.

From the window or the porch, I watch the soft glow of colors in the sky as it fades slowly from bright summer day to short summer night – and the way the mountains fade gradually into the growing dark.

We’ve enjoyed long porch sits after twilight fades, when the reward for loitering among mosquitoes is the enchanting sound of the hermit thrush trilling somewhere near the forest’s edge, frogs singing from wet places all around us, and the magical twinkling of fireflies through the dusky fields.

I know this season will fly by. It always does. I'm savoring summer's sweetness while it lasts.