Each November, as daylight retreats toward the solstice and the damp chill of winter encroaches, I put away the running shoes. And each April, as the snow disappears from my ski route through the woods and the sun warms toward t-shirt weather, I pull them back out and – despite the painful protests of my hip flexors – take once again to running the back roads.

I do not love running, but I have dabbled in it, off and on, for many years. 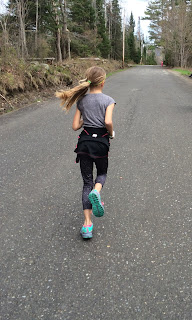 In high school, I took to jogging between soccer and track seasons. (In the latter, I was a marginally speedy sprinter and a decent long-jumper, but never ran more than 200 yards at a time.) A couple times a week, I’d don the headphones of my yellow Walkman, pop in a mixed tape, and head out on a loop around the neighborhood, which I figure measured about a mile and a half.

During college, I often ran a route around campus on weekend mornings, when it seemed I was the only one awake. Jogging became a way to pass the time and get some exercise while I waited for my friends to wake up and go with me to the dining hall for a late breakfast.

The summer I spent in Ireland I ran occasionally, heading up the narrow road, turning down a lane that led to the beach, and coming back on the sand. I usually had the beach to myself, but the locals thought I was mad (Irish speak for coocoo) to run without the purpose of chasing a ball around a field.

In my Colorado years I left all running (except on the soccer field) behind and took to mountain biking, though I was never hardcore like many of my friends there. Still, I had my favorite loops, including one I could ride from home. It took about an hour, traversed a gentle river, passed by an old mine, and wove through a grove of aspen trees in a perfect mix of uphill, downhill, and flat.

The first summer I moved back East, I bought a road bike and learned the joys of pedaling for hours along pavement. I developed biking friends – people who liked to ride and had large blocks of free time during the warmer months to hit the road.

Sadly, that road bike sits dusty in my garage now. I haven’t given up on someday getting back into riding, but that day does not seem like it will be soon, large chunks of free time being as scarce as they are. My mountain bike, though, still sees sunlight during the summer, generally on family outings. At 20-plus years old, that bike is roughly double the age of my children.

It was after having those children that I started to run again.

I run now because it is easy – at least schedule-wise and logistically speaking. To run, I do not need to block out an hour or two or three. I don’t need to pump air into tires or remember to carry a spare tube in case of a flat. I don’t need to load the bike into the car and drive to a trailhead.

To run, I just need to lace up the running shoes, grab the dog’s leash, and head out the door. And so I run. Not far, and certainly not fast, but enough. Enough to get the heart pumping and the lungs sucking in fresh air. Enough to feel as if I am staying strong. Enough to keep track of the natural shifts in the local landscape as the seasons evolve from one to the next. Enough to clear my mind.

I don’t always love running. Indeed, sometimes it is hard to find the motivation to get started. But I am always glad, once I return home, that I have – if only for a short time and a small distance – been on the run.