The clouds that had been drifting across Cannon Mountain all morning started dripping rain as I stood near the summit, peering downhill into the fog. I was amid a throng of spectators at the finish line of the 25th Top Notch Triathlon, ringing cowbells and shouting encouragement to tired racers as they pushed through the last steps of the climb. 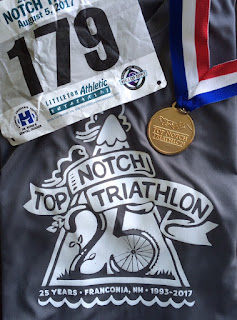 The weather this year, organizer Kim Cowles told me, was the worst it’s ever been for the Top Notch. A stiff headwind met racers as they set off on bikes from downtown Franconia. The same wind whipped whitecaps across the surface of Echo Lake as swimmers stroked their way through the chilly water. Now the high-elevation rain showers were threatening to evolve into a full-fledged downpour.

Somewhere out there on that foggy mountain was my 10-year-old son.

After managing the top water station last year with me and his sisters, and watching several familiar faces – including a couple of schoolmates – come through, Owen asked if he could put a team together for this year’s race. His buddies – and their parents – were game, and Team McCloughton was born.

Weeks before the race, Owen asked, “Do you think we’ll win?” I knew there were likely to be tough teams and older kids who had done the race before, so my response was, “Absolutely not.”

We discussed how it’s not about winning, but about challenging yourself, having something to train toward, and tackling the challenge despite knowing you probably won’t end the day victorious. Plus, the Top Notch Triathlon is a special sort of event, filled with community and competition encompassing everyone from hardcore athletes to local families to weekend warriors out for a Saturday adventure.

(My past Top Notch stories: Surrounded by Men in Spandex, Making it to the Top, and Top Notch.)

The boys, with a combined race day age of 29, were certainly among the youngest participants. The triathlon brought them each a bit outside of their comfort zones, but despite a few pre-race jitters, they were excited to get out there Saturday morning with a few hundred other Top Notch-ers.

Wyatt smiled and waved as he pedaled out from the start toward a gnarly, nearly all uphill bike course he’d never seen before. He powered up Butter Hill and through the wooded part of the route, over rocks and through muddy ruts to Echo Lake. At the handoff, Jackson dove into the chilly, wind-churned water while storm clouds brewed overhead. Part way across the lake he turned to his mom, who was swimming with him for moral support, and declared he wanted to do this again next year.

I had assumed Owen would want me to hike with him on the last leg. He’s hiked big mountains before, including the other side of Cannon earlier this summer, but never in race mode and always with me. But he insisted he wanted to hike solo, wanted me to be at the finish line when he got there.

So I gave him a cheer and headed to the tram, which would carry us to that finish line, with the McCloughton contingent of parents and siblings and grandparents. “You know you’re raising mountain kids when you’re OK with your 10-year-old climbing a 4,000-footer on his own, in the rain,” one of the other parents remarked as we rode into the clouds and toward the summit a few minutes later.

But I knew Owen wasn’t on his own, not really. His aunt was in the race and on the mountain somewhere ahead of him. Along the way he passed his school principal, who was participating in his 20th Top Notch Triathlon, and the local police chief. A couple of older schoolmates went by. His uncle was there as a member of the town’s EMS squad. People – strangers, mostly – shouted encouragement from the open windows of the tramcar as it passed overhead, near the top of that long climb.

There is nothing lonely about this community-centric event – except the utter physical effort it takes to complete. I’ve participated in the Top Notch before, and I’ve made that race day climb three times. I know there is a buoying jolt of adrenaline at the bottom, where cheers provide a mental boost. But most of the hike is a leg-burning, lung-squeezing, cheer-less slog.

As I stood at the top of Cannon Saturday peering through the dripping fog for the familiar pattern of Owen’s favorite soccer shirt, I wondered how he was faring out there in the clouds, what was going through his mind, where he was on the mountain. And then, there he was, striding on tired legs toward the summit. Even through the mist I could see he was smiling.

It was a tired smile, but a proud one, too: the smile of a kid who’d just climbed a mountain, in the rain, on his own, and made it across the first big race finish line of his life. It was a smile matched by his teammates’ grins as they met him there, each one done with his own leg of a team effort.

Winning was far from the boys’ minds as they sat in the tram station, out of the downpour that had intensified seconds after Owen crossed the finish. Any pre-race jitters were long gone as they basked in that feeling of accomplishment, a mixture of thank-goodness-that’s-over and we-did-it!

A couple hours later we learned Team McCloughton – a combination of the boys’ last names – was the only youth team to complete the triathlon this year, and they had won the category. They’d already had a topnotch day; the medals were just icing on the triathlon cake.

Now they’re hooked, ready to do it all again next year. If they do, my son might ask again if I think they’ll win. Probably not. But it’s not about winning. It’s about making it through the woods, across the lake, and up the mountain – on your own, with a little help from your friends.