The first robin of spring arrived in our yard this week. We noticed it Monday afternoon as we sat at the window watching snow sift steadily from the sky. The robin’s characteristic rusty red breast stood out in stark contrast to the whiteness enveloping the bird’s perch in our highbush cranberry, near the perennial garden. It will be a while, still, until that garden completely melts out, transforming from pristine white to sloppy, boot-sucking mud and small greening stems, and finally to a vibrant tangle of summer blooms. 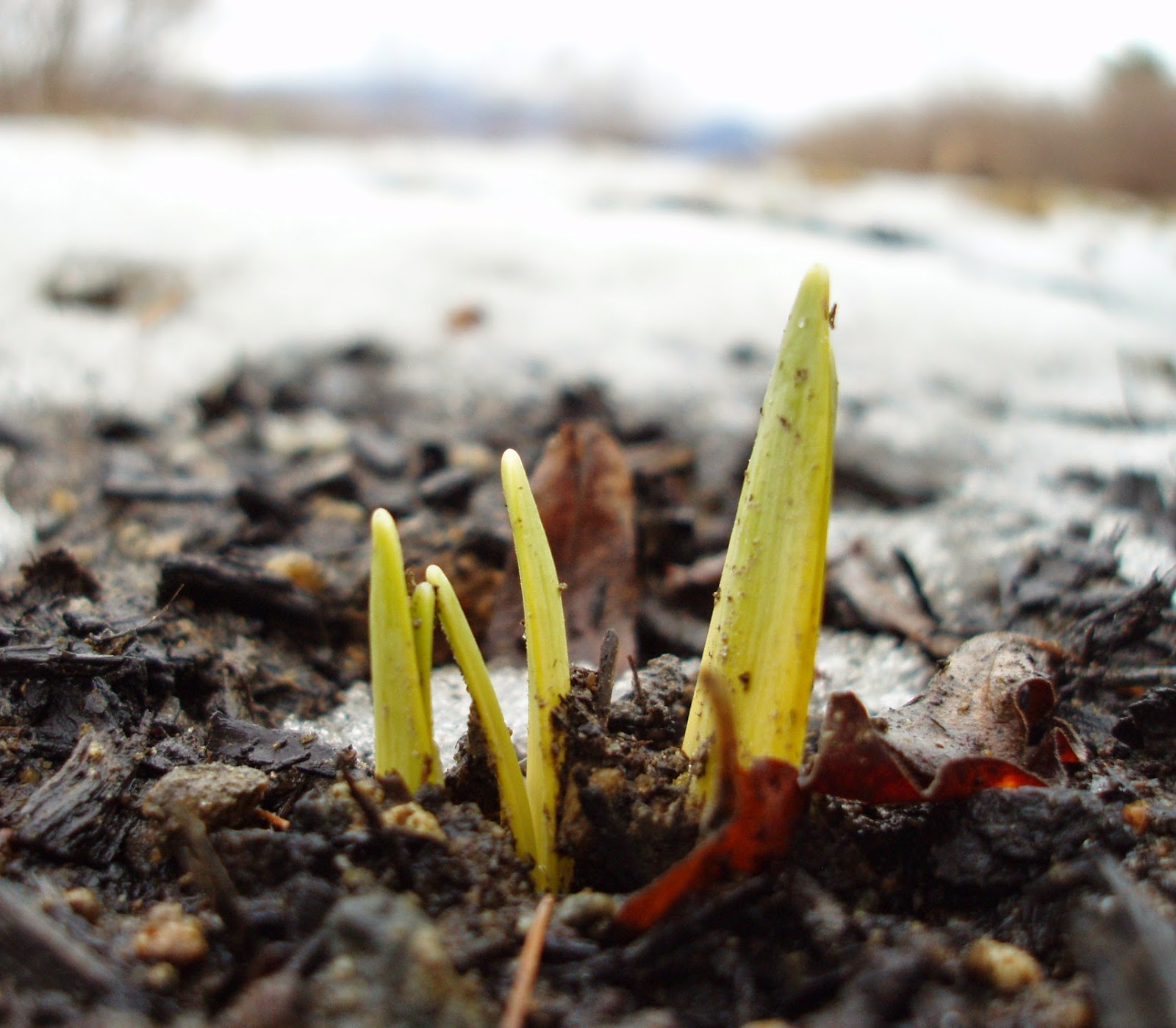 Winter’s in a slow fade this year. It’s been a little bit one step forward, two steps back in the dance from one season to the next. But the considerable accumulation of our very cold and snowy winter is melting away, albeit gradually. It seems we’re about to turn the corner, really and truly, to spring.

The fields around our house, which are mostly south-facing, have melted down to a thick crust, covered with the occasional dusting of new spring snow. The driveway is now more mud than ice. Each day it seems something new emerges from the snow. Stone walls forgotten beneath a thick layer of white reappear along field edges. Tree stumps in the yard and boulders in the field we haven’t seen in months rise from the receding snow, causing many second glances in the dim light and foggy awareness of early morning – is that a bear or a big rock, a turkey or an old stump?

The snow fort at one end of the driveway, where the plow created colossal walls through winter, where snow benches and snow caves and curving sled runs were built, is diminished now to a mere hardened snowbank with an icy tunnel through the middle. Sandbox toys overlooked in our fall cleanup reappear, surfacing where they were dropped a season ago.

Other, not so pleasant, things emerge from the snow, too. A winter’s worth of dog droppings along the border of the yard. Tree limbs of various sizes, blown down during wind storms, which we’ll drag someday to the ever-growing brush pile out back. Roadside trash, which will fill many bags in the coming weeks.

We live along a road that cuts through to the local recycling center – a.k.a. The Dump – and items often blow from the beds of dump-bound pickup trucks to settle into the ditches and vegetation along our road. Each spring, as the snow recedes, we begin to pack plastic bags into pockets as we head out for walks and bike rides. Usually we fill these bags before we make it halfway to where we’re going, collecting beer bottles and soda cans, plastic lighters and crushed paper cups, a winter’s worth of debris scattered through the neighborhood.

As winter’s slow fade continues, as the litter and debris of both humans and nature is cleared away, new things – welcome things – emerge in their wake. Fiddleheads will soon unfurl along the roadsides. Slate-colored juncos and song sparrows have joined the ever-present chickadees at the spot where, until recently, the bird feeder hung. As those birds look for seeds dropped into the melting snow, the robins wait for worms to wiggle from thawing ground.

Just outside the picture window, where we noticed spring’s first robin, the snow has melted completely away from the house. There are daffodil and crocus bulbs planted there, and we watch to see if they have survived a winter of hungry rodents, if they will emerge from winter’s slow fade as another harbinger of spring, adding color to the changing landscape as the robin’s red breast did this week.